Alternatives for natural resources are very less and our next generations may face lot of problems because of lack of these natural resources. We have already seen the circuit diagram and working of Auto Intensity Control of Street Lights circuit in the earlier post. This article describes about the circuit that switches the street lights on detecting vehicle movement and remains off after fixed time.

Principle Behind this Circuit

As the resistance value is maximum in the midnights, real time clock comes into the play. The controller checks peak time during which there is no traffic and switch OFF the lights. When there is any vehicle on the road, it is detected by the PIR sensor.

Whenever PIR sensor is detected it just indicates the microcontroller to switch on the street lights. Then lights are switched on for 2 to 3 minutes and switched off automatically. 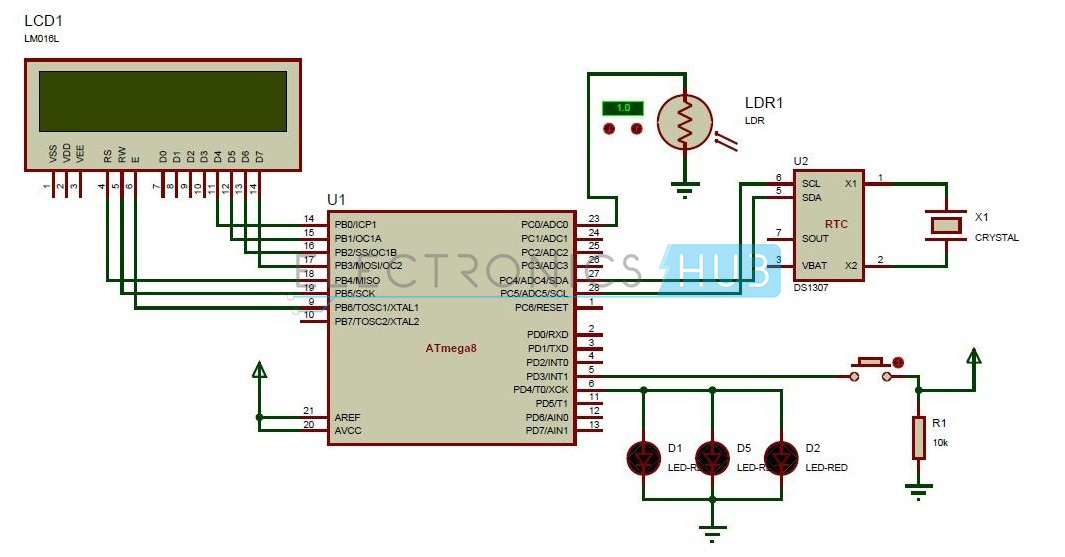 Passive Infrared sensor, also called as PIR sensor is connected to the PD0 pin of the microcontroller. PIR sensor senses the motion of the objects.

The PIR sensor internally will have an IR detector. Every object in the world radiates some IR rays. These are invisible to the human eye but electronic components can detect them. Different objects will emit IR rays of different wavelength. These rays were detected by the PIR sensor. PIR is initially high and is set to low automatically after sometime. Whenever it detects the motion of any object, it becomes low.

LDR is connected to the ADC pin – ADC0 of the microcontroller as LDR will produce analog value which is converted to digital by the ADC.

I2C is inter integrated circuit. This is two wire interface protocol in which only two signals were used to transmit the data between two devices.

LCD is used for displaying time. LCD interfacing in 4bit mode is shown in the circuit diagram. Time from RTC is read and displayed on the LCD.

How to Operate this Circuit?

The above circuit shows the street light that glows on detecting vehicle movement using avr. Here is the circuit that uses 8051 and IR sensors.

The principle behind the working of the project lies in the functioning of IR Sensor. We are going to use a Transmissive type IR Sensor in this project.

In Transmissive IR Sensor, the IR transmitter and receiver are placed facing each other so that IR receiver always detects IR Rays emitted by the IR Transmitter.

If there is an obstacle between the IR Transmitter and Receiver, the IR Rays are blocked by the obstacle and the IR Receiver stops detecting the IR Rays.

This can be configured to turn ON or OFF the LEDs (or street lights) with the help of microcontroller. 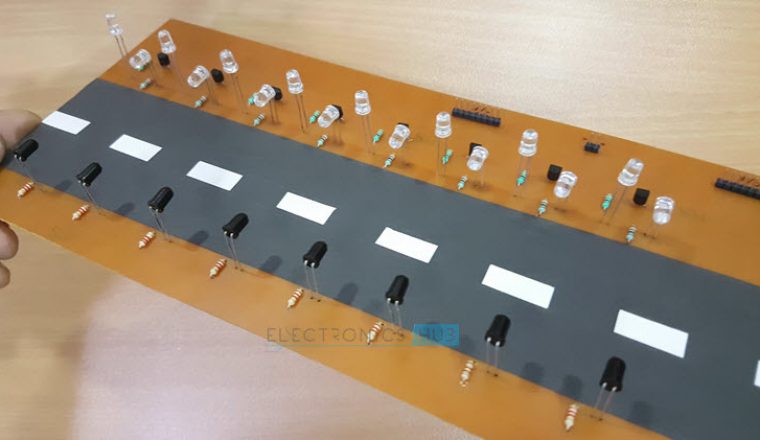 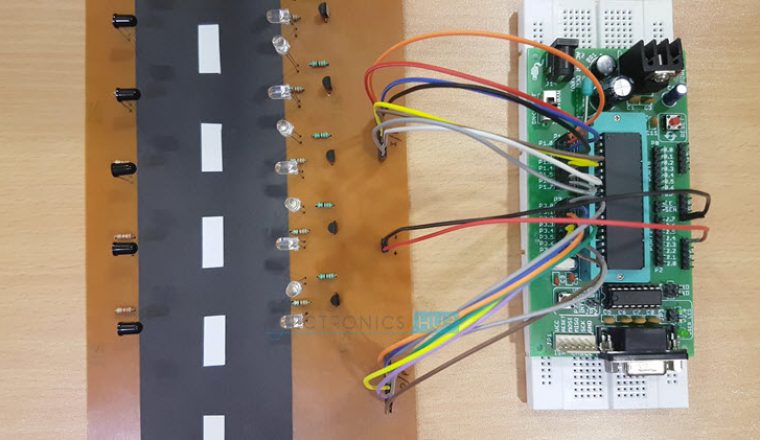 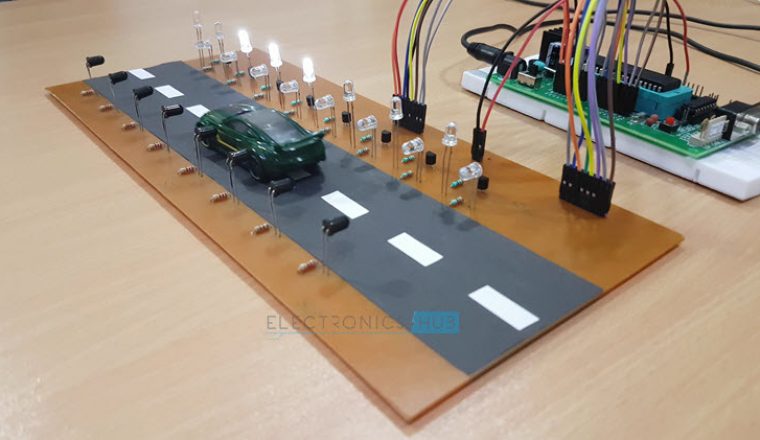 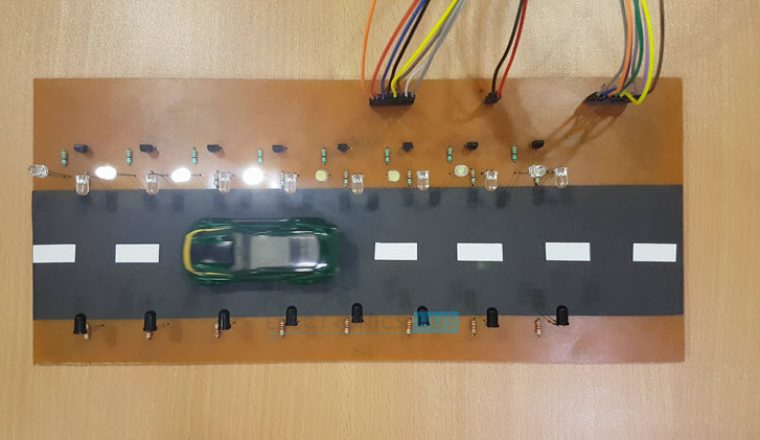 The main components of the project are AT89C52 Microcontroller, IR Sensor (IR Transmitter and IR Receiver) and LEDs.

In order to use the on-chip oscillator, the 8051 microcontroller requires an external clock. This is provided by a crystal oscillator. An 11.0592MHz quartz crystal is connected to XTAL1 and XTAL2 pins with two 22pF ceramic capacitors connected to it.

The reset circuit of the microcontroller consists of a 10K resistor, 10uF capacitor and a push button. All the connections of the reset circuit are shown in the circuit diagram.

External access Pin is used to access external memory when it is connected to ground. Anyway, we are not going to use any external memory here. So, connect this pin to Vcc via a 10K resistor.

Hence, connect the 8 IR transmitters with corresponding 8 current limiting resistors of 470 ohms with a power supply.

An LED along with a series current limiting resistor of 100 ohms is connected to the each of the collector terminal of the transistor.

At the beginning, when there is no obstacle, the IR receiver continuously detects IR light transmitted by the IR Transmitter. When a car or any other vehicle blocks any of the IR sensor, the microcontroller will turn ON the immediate three LEDs.