The circuit employed here is an uncomplicated light/dark activated switch and contains a relay at its output, which simply turns ON/OFF a street light and further can be extended to control any electrical appliance in a household. 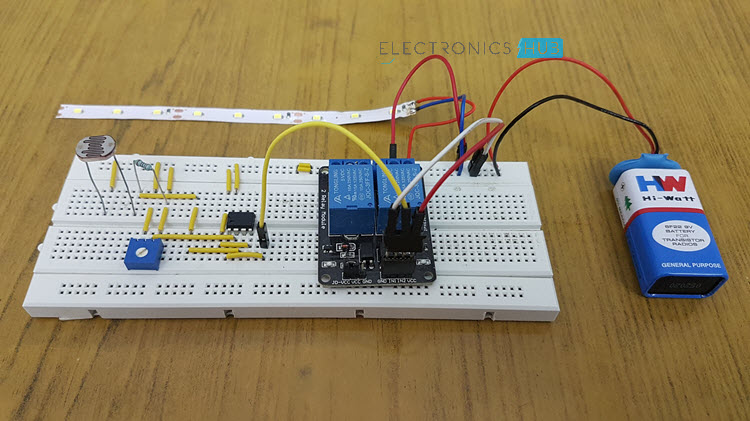 Many people have a phobia of darkness, so to assist them in such situations, we have explained a simple circuit that will automatically turn on the street light consisting of LEDs or bulb coupled with relay. It is lit well enough to see the objects nearby.

The whole circuit is based on IC LM358, which is basically an operational amplifier that is configured in a voltage comparator. LDR (Light depending resistor), whose resistance is based upon the quantity of the light falling on it, is the main component for sensing the light. Along with these, a few more components are also used.

Components used in this Circuit

It is an Operational Amplifier IC. It is available ib 8-pin DIP Package and can be used in several configurations like Amplifier, oscillator, comparator etc.

In the time of darkness or when there is no light, the resistance of LDR is in the range of mega ohms, while in the presence of light or in brightness in decrease by few hundred ohms.

Before mounting any component in the circuit it is a good practice to check whether a component works properly or not so that you can avoid consumption of time in troubleshooting. For testing LDR set the range of multimeter in resistance measurement.

It is a passive component having two terminals that is used to manage the current flow in the circuit. A current that flows via a resistor is directly proportional to the voltage that appears across the resistor.

Resistors are of two types –

Value of resistance can be calculated with the help of multimeter or with the color code that is visible on the resistor.

It provides isolation between the controller and the device because as we know devices may work on AC as well as on DC but they receive signals from microcontroller which works on DC hence we require a relay to bridge the gap. The relay is extremely useful when you need to control a large amount of current or voltage with the small electrical signal.

Factors for Selecting an appropriate Relay

NOTE: The Relay module used in this project is an active LOW Relay.

The working of circuit is very much easy to understand. In this circuit, we used  IC LM358, which is basically an operational amplifier. Pins 2 and 3 of these IC are used to compare the voltage and give us an output as high or low depending on the voltages at the input pins. 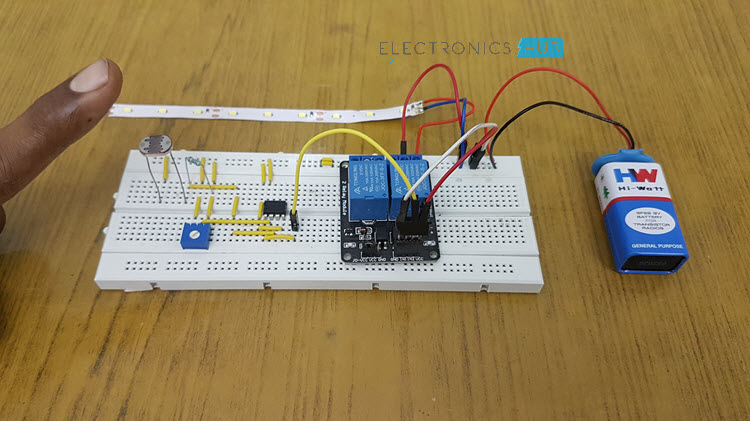 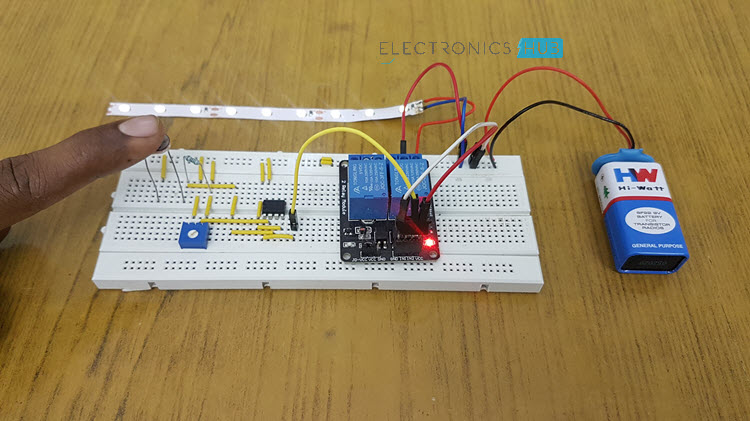 But in dimness or at night time, we know that resistance of LDR is high. Hence, the voltage at  non-inverting input pin 3 of the IC LM358 decreases than the inverting input pin 2. As a result, the output pin 1 moves to low state, which further makes the relay to activate and the LED or bulb associated to it will glow.