Auto Night Lamp Using High Power LEDs is a circuit which turns ON the LED lights interfaced to it at night time and it turns OFF the lights automatically when it is day. Usage of LEDs is growing day by day due to the advantages they provide compared to the conventional filament bulbs or fluorescent lamps. They provide good quality of white light with a better intensity compared to others. They also consume less power compared to their alternatives.

Do you know about How a Light Activated Switch Circuit Works? 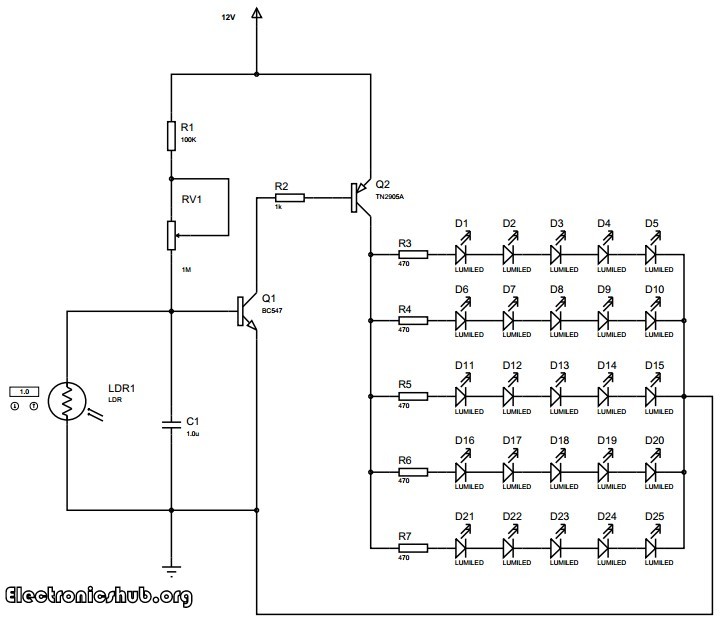 The LEDs used in the circuit are high powered white LEDs. The intensity of light produced by these LEDs equals an ordinary fluorescent bulb. The lighting produced is sufficient for reading or to do any other daily activity. The circuit can be assembled on a printed circuit board with all the components neatly arranged and the LEDs placed in order. Try to place the LEDs maintaining a distance of about 1 cm between the LEDs so that the the lighting will be well distributed in your room.

While making a night lamp switcher, there are many aspects which needs to be taken into consideration without which there is a possibility of destroying the home appliances and lights. In this circuit, strict measures are taken to ensure that the lights to be operated are not damaged because of switching. In general, if we make a simple automatic night lamp switcher, it may turn ON the lights when it is dark. But here comes a problem. When the level of darkness is approaching, the circuit may get successive signals of dark and light with little time intervals. This may cause the circuit to repeatedly turn ON and OFF the lights at a high frequency which can possibly damage our lights within a few minutes or hours. This happens every time at evening as well as in the morning when the light intensity crosses a value for which our circuit is sensitive and toggles the switch.

In this circuit, it is not only a simple automatic light switching circuit, but also that it avoids repeated frequent switching of the devices which is usually ignored in most similar circuits but may have a detrimental effect on our operating devices. In this case, the lights. This is why the circuit is named as intelligent unambiguous night lamp as it intelligently switches the lights by avoiding repeated switching caused by unambiguity.

How to Operate this Night Lamp Switcher Circuit?

The two light detecting modules are arranged in such a way that when the first light intensity (dark point 1) is detected, the circuit turns On the relay and hence the lights will turn On. The circuit will turn Off the relay back again when both the light detecting modules detect light. This makes it eliminate ambiguities. There may be simpler circuits which detect darkness and turn On the lights but most of them fail to eliminate undesired repetitive switching. This circuit does a wonderful job by eliminating undesired switching effects.