Inductor consists of wire wound around a core of ferrite material that includes an air gap. Inductor stores the energy in the form of the magnetic field. Inductor has many electrical properties when subjected to a magnetic field.

Before going to Lenz’s Law first we have to know about Faraday’s Law of induction. It states that the magnitude of emf induced in the coil is equal to the rate of change of flux that links with the coil. This is equated as below

Whereas the product of number of turns in the coil and flux related with the coil gives us the flux linkage.

Lenz’s Law states that an emf is generated by change in magnetic flux as stated in faraday’s law. The polarity of this induced emf is such that it produces a current such that magnetic field opposes the change which produces it.

Where ∂ΦB = change in the magnetic flux

A = Area of the coil

u = permeability of the core.

L = Length of the coil

di/dt = Rate of change of current in the coil.

When the wire is coiled as a series of continuous loops , it is called as solenoid. In this type , the magnetic field strength will increase or decrease with the increasing and decreasing currents respectively. It is similar to effect of bar magnet but with the variable field strength.

The symbol of Air core

The symbol for Iron core

The symbol for Ferrite core

The symbol for Variable core

L – Inductance of the coil.

µ – Permeability of the core.

N-Number of tuns in the coil

l -Length of the inductor.

When ‘n’ number of inductors are connected in series the total inductance value is the sum of all the individual inductances.

If we observe these two equations these are very similar to the resistors connected in series and parallel.

The SI unit of inductance is Henry. It is named after the American physicist Joseph Henry. This is denoted by ‘H’.

One Henry is nothing but the rate of change of current in a circuit is one ampere per second , then the resultant emf is one volt. This is equated as

1.Material of the core

2.Number of turns of the inductor

3.Length of the coil

If the coil length increases the inductance decreases. If the length is decreased, inductance is increased. For any amount of given current , for longer length of coil the generated magnetic flux results in more opposition to the generation of that flux.

4.Area of the coil

Let us consider a solenoid wound with a single layer of turns with some diameter of the wire and the turns are placed evenly then the typical formula for approximating the inductance value is given as follows.

d = diameter of the coil in meters.

l = length of the wire in meters.

The work done by the source in order to remain the current flowing through the coil against the induce emf is power. It is given as

This is given as

The magnetic flux which is measured in webers, equal to magnetic flux density B (t), multiplied by the cross-sectional area of the core ‘Ac’.

This is given as

The energy stored in an inductor is equal to the amount of work done to establish the current flow through the inductor and to generate magnetic flux.

I = current flow through the inductor and

Let us consider the following circuit with current flowing through the coil is 5 A. 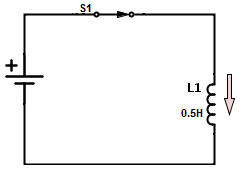 Back EMF generated in an inductor: The EMF produced in the inductor will depends on the source currents that is either the current is AC or DC.

The self-induced emf VL = – L di/dt is applicable only for the AC current because there will be rate of change of current that is di/dt is not equal to zero. If the flow of the inductor current is constant , that is at DC current the di/dt is zero. At this stage the inductor acts like a piece of wire.

Time constant of an inductor: Let us consider the circuit as shown below with an inductor and an open switch. 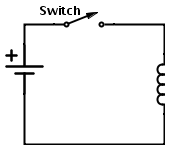 When we close the switch the current will flow through the circuit and slowly rise to its maximum value at the rate determined by the inductance of the inductor. The rate of current which flows through the inductor multiplied by the inductance gives us VL. Thus there will be self-induced emf (VL) in the circuit and this value depends on the inductance value of the inductor in the circuit VL= L di/dt .This VL will fights against the applied voltage until the current reaches its maximum value and reaches the steady state. At this stage only the coils D.C resistance will exists to oppose the current flow. Because in DC inductor the variation of current take place only during the transition state that is from zero to maximum and maximum to zero. Since DC is zero frequency component there is no reactance offered by the circuit in steady state condition.