16 Types of Computer Ports and Their Functions

A Computer Port is an interface or a point of connection between the computer and its peripheral devices. Some of the common peripherals are mouse, keyboard, monitor or display unit, printer, speaker, flash drive etc.

The main function of a computer port is to act as a point of attachment, where the cable from the peripheral can be plugged in and allows data to flow from and to the device. 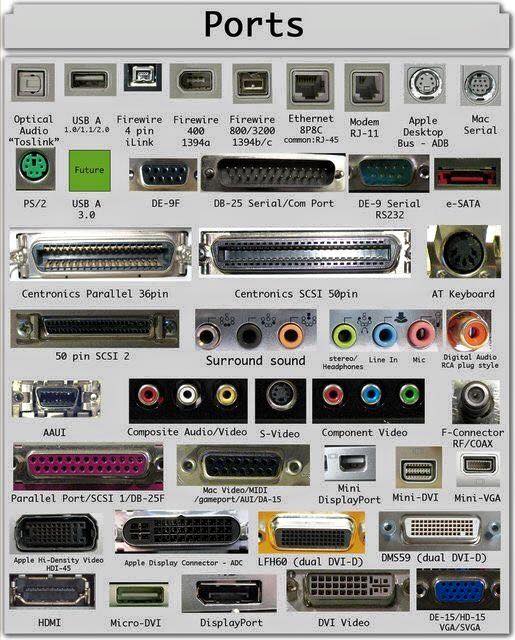 A computer port is also called as a Communication Port as it is responsible for communication between the computer and its peripheral device. Generally, the female end of the connector is referred to as a port and it usually sits on the motherboard.

In Computers, communication ports can be divided into two types based on the type or protocol used for communication. They are Serial Ports and Parallel Ports.

A serial port is an interface through which peripherals can be connected using a serial protocol which involves the transmission of data one bit at a time over a single communication line. The most common type of serial port is a D-Subminiature or a D-sub connector that carry RS-232 signals.

A parallel port, on the other hand, is an interface through which the communication between a computer and its peripheral device is in a parallel manner i.e. data is transferred in or out in parallel using more than one communication line or wire. Printer port is an example of parallel port.

The article gives a brief introduction to different types of ports along with their applications.

PS/2 connector is developed by IBM for connecting mouse and keyboard. It was introduced with IBM’s Personal Systems/2 series of computers and hence the name PS/2 connector. PS/2 connectors are color coded as purple for keyboard and green for mouse.

PS/2 is a 6-pin DIN connector. The pin out diagram of a PS/2 female connector is shown below.

Even though the pinout of both mouse and keyboard PS/2 ports are same, computers do not recognize the devise when connected to wrong port.

PS/2 port is now considered a legacy port as USB port has superseded it and very few of the modern motherboards include it as a legacy port.

Even though the communication in PS/2 and USB is serial, technically, the term Serial Port is used to refer the interface that is compliant to RS-232 standard. There are two types of serial ports that are commonly found on a computer: DB-25 and DE-9.

DB-25 is a variant of D-sub connector and is the original port for RS-232 serial communication. They were developed as the main port for serial connections using RS-232 protocol but most of the applications did not require all the pins.

Hence, DE-9 was developed for RS-232 based serial communication while DB-25 was rarely used as a serial port and often used as a parallel printer port as a replacement of the Centronics Parallel 36 pin connector.

Some of the applications of DE-9 port are serial interface with mouse, keyboard, modem, uninterruptible power supplies (UPS) and other external RS-232 compatible devices.

The pinout diagram of DE-9 port is shown below.

The use of DB-25 and DE-9 ports for communication is in decline and are replaced by USBs or other ports.

Before the wide use of USB ports, parallel ports are very common in printers. The Centronics port was later replaced by DB-25 port with parallel interface.

Audio ports are used to connect speakers or other audio output devices with the computer. The audio signals can be either analogue or digital and depending on that the port and its corresponding connector differ.

It is the most commonly found audio port that can be used to connect stereo headphones or surround sound channels. A 6 connector system is included on majority of computers for audio out as well as a microphone connection.

The 6 connectors are color coded as Blue, Lime, Pink, Orange, Black and Grey. These 6 connectors can be used for a surround sound configuration of up to 8 channels. 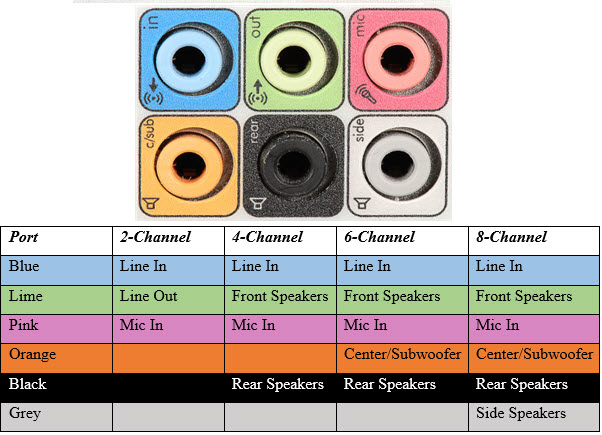 The Sony/Phillips Digital Interface Format (S/PDIF) is an audio interconnect used in home media. It supports digital audio and can be transmitted using a coaxial RCA Audio cable or an optical fiber TOSLINK connector.

Most computers home entertainment systems are equipped with S/PDIF over TOSLINK. TOSLINK (Toshiba Link) is most frequently used digital audio port that can support 7.1 channel surround sound with just one cable. In the following image, the port on the right is an S/PDIF port. 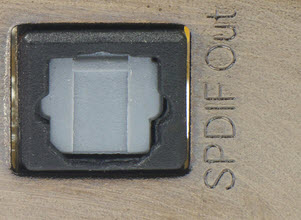 VGA port is found in many computers, projectors, video cards and High Definition TVs. It is a D-sub connector consisting of 15 pins in 3 rows. The connector is called as DE-15.

VGA port is the main interface between computers and older CRT monitors. Even the modern LCD and LED monitors support VGA ports but the picture quality is reduced. VGA carries analogue video signals up to a resolution of 648X480. 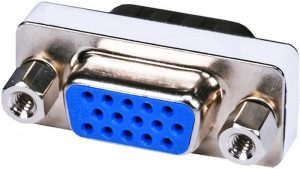 With the increase in use of digital video, VGA ports are gradually being replaced by HDMI and Display Ports. Some laptops are equipped with on-board VGA ports in order to connect to external monitors or projectors. The pinout of a VGA port is shown below. 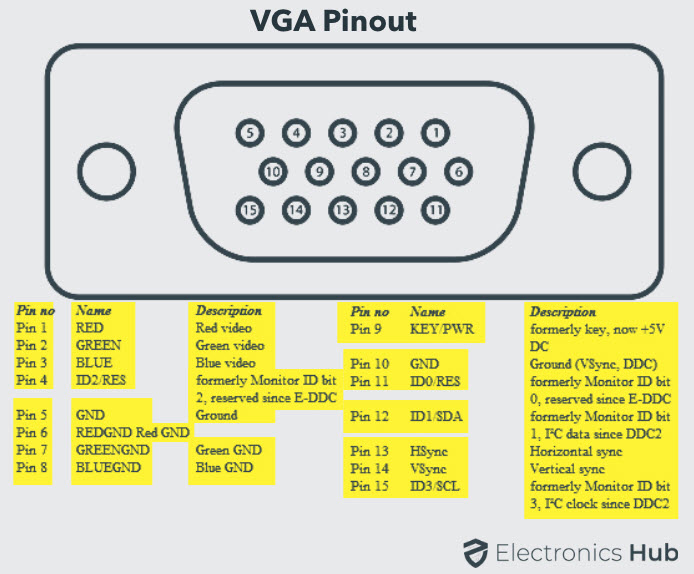 DVI is a high speed digital interface between a display controller like a computer and a display device like a monitor. It was developed with an aim of transmitting lossless digital video signals and replace the analogue VGA technology. 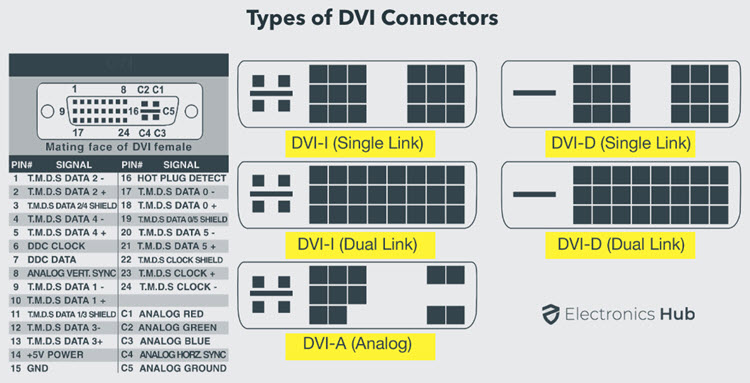 Mini-DVI port is developed by Apple as an alternative to Mini-VGA port and is physically similar to one. It is smaller than a regular DVI port.

It is a 32 pin port and is capable of transmitting DVI, composite, S-Video and VGA signals with respective adapters. The following image shows a Mini-DVI port and its compatible cable. 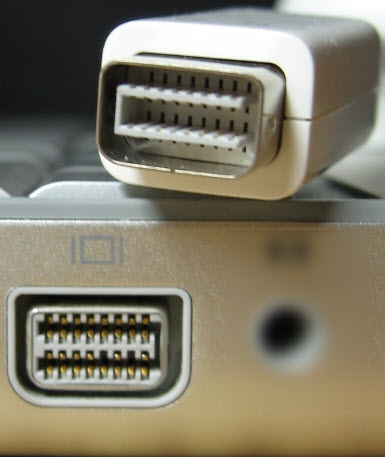 Micro-DVI port, as the name suggests is physically smaller than Mini-DVI and is capable of transmitting only digital signals.

This port can be connected to external devices with DVI and VGA interfaces and respective adapters are required. In the following image, a Micro-DVI port can be seen adjacent to headphone and USB ports.

Display Port is a digital display interface with optional multiple channel audio and other forms of data. Display Port is developed with an aim of replacing VGA and DVI ports as the main interface between a computer and monitor.

The Display Port has a 20 pin connector, which is a very less number when compared to DVI port and offers better resolution. The pin out diagram of a Display Port is shown below. 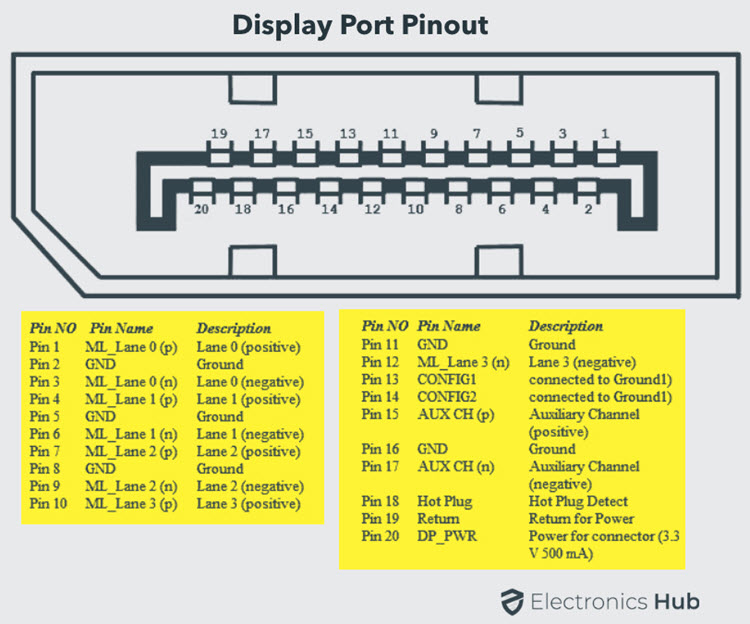 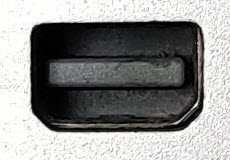 Most laptops provide Mini DisplayPort as an additional video out option in addition to HDMI.

The video signals are transmitted over a single channel along with the line and frame synchronization pulses at a maximum resolution of 576i (standard resolution).

The red and white connectors are used for stereo audio signals (red for right channel and white for left channel). 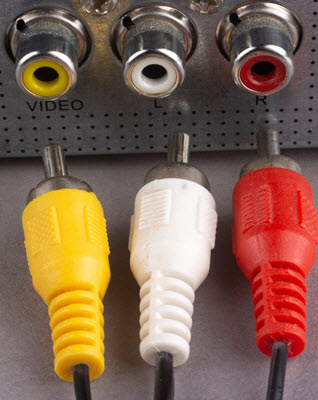 The ports of the commonly found Component video uses 3 connectors and are color coded as Green, Blue and Red.

S-Video or Separate Video connector is used for transmitting only video signals. The picture quality is better than that of Composite video but has a lesser resolution than Component video.

The S-Video port is generally black in color and is present on all TVs and most computers. S-Video port looks like a PS/2 port but consists of only 4 pins. 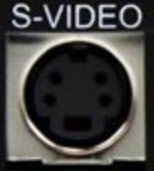 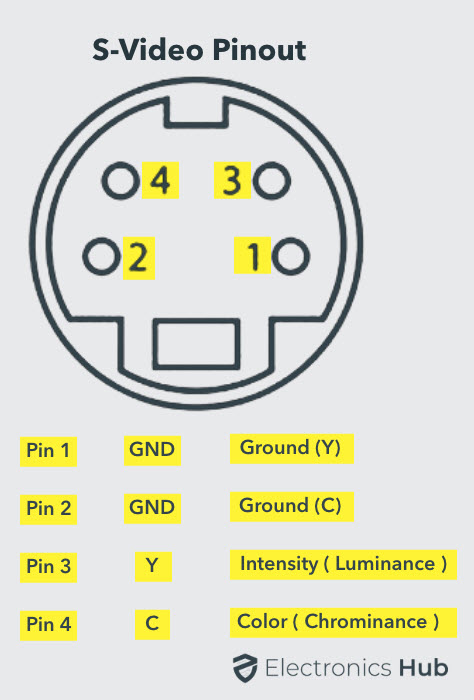 HDMI can be used to carry uncompressed video and compressed or uncompressed audio signals. The HDMI port of type A is shown below.

The HDMI connector consists of 19 pins and the latest version of HDMI i.e. HDMI 2.0 can carry digital video signal up to a resolution of 4096×2160 and 32 audio channels. The pinout diagram of an HDMI port is as follows. 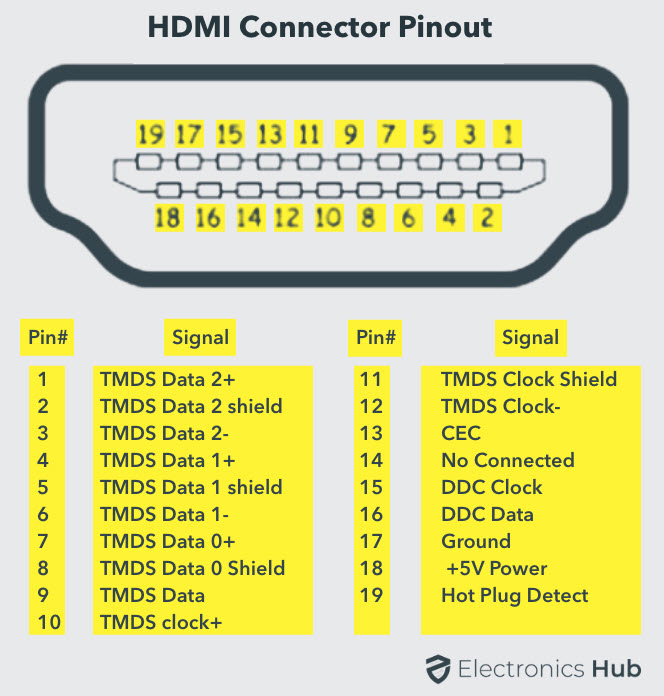 Update: The latest version of HDMI is 2.1 with much improved bandwidth, resolution and support from video card manufacturers. While HDMI 2.0 has a data bandwidth of 18 Gbps, the HDMI 2.1 has a staggering 48 Gbps of bandwidth. Coming to the display resolution, HDMI 2.1 supports 4K and 8K at 120 Hz refresh rate. Most modern (at least high end) graphics cards like Nvidia RTX 3090 provide at least a couple of HDMI 2.1 Ports to connect with monitors and TVs.

With HDMI 1.3 Version, a new HDMI Port and Connector combination is released called the Mini HDMI. Physically, it is smaller than a regular HDMI Port but has same 19 Pin. Intended for portable devices like laptops, cameras, camcorders, the Mini HDMI Port isn’t that popular.

Micro HDMI is often used in cameras, single board computers (like Raspberry Pi 4), etc. where physically it is difficult to include a regular HDMI port. 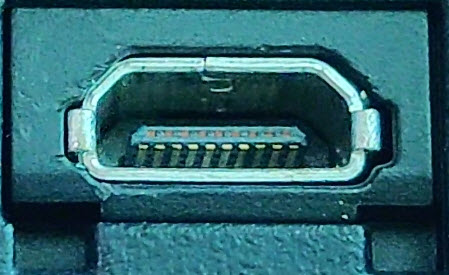 The size of Micro HDMI is significantly smaller than regular HDMI and has some resemblance to a micro–USB Port (sometimes people confuse among the two). The port on the left is a micro USB port and the one on the right is a micro HDMI Port.

USB port can be used to transfer data, act as an interface for peripherals and even act as power supply for devices connected to it. There are three kinds of USB ports: Type A, Type B or mini USB and Micro USB.

The pinout diagram of USB Type – A port is shown below. The pinout is common to all standards of Type – A. 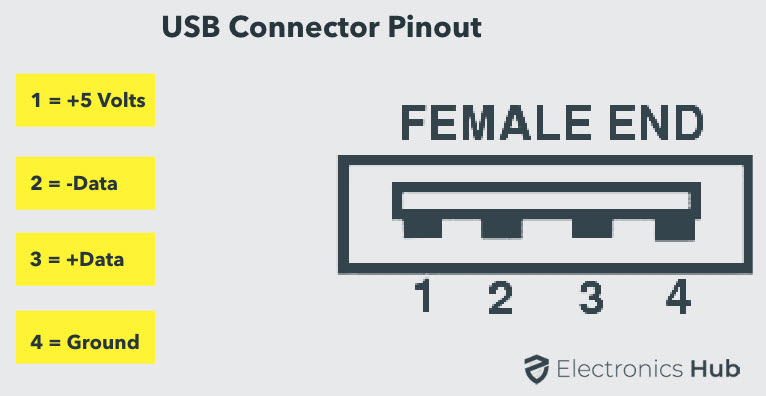 USB Type – C is the latest specification of the USB and is a reversible connector. USB Type – C is supposed to replace Types A and B and is considered future proof. 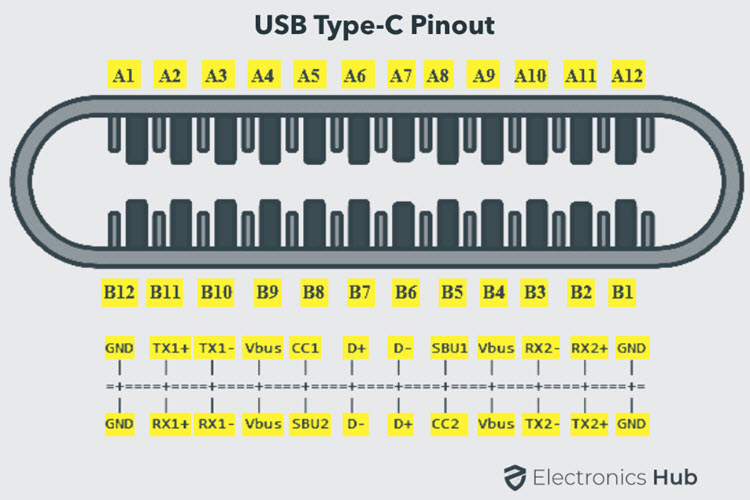 In the latest USB4 specification, USB Type C Devices can support speeds up to 40 Gbps.

This feature of handling high current is used in the latest Fast Charging Technology where a Smart Phone’s battery will reach its full charge is very less time. So, USB Type C Ports can provide up to 100W of power (which can be used for charging mobile phones and laptops).

Ethernet is a networking technology that is used to connect your computer to Internet and communicate with other computers or networking devices.

The interface that is used for computer networking and telecommunications is known as Registered Jack (RJ) and RJ – 45 port in particular is used for Ethernet over cable. RJ-45 connector is an 8 pin – 8 contact (8P – 8C) type modular connector.

The latest Ethernet technology is called Gigabit Ethernet and supports a data transfer rate of over 10Gigabits per second. The Ethernet or a LAN port with 8P – 8C type connector along with the male RJ-45 cable is shown below.

As mentioned earlier, an Ethernet RJ-45 port has 8 pins and the following picture depicts the pinout of one. 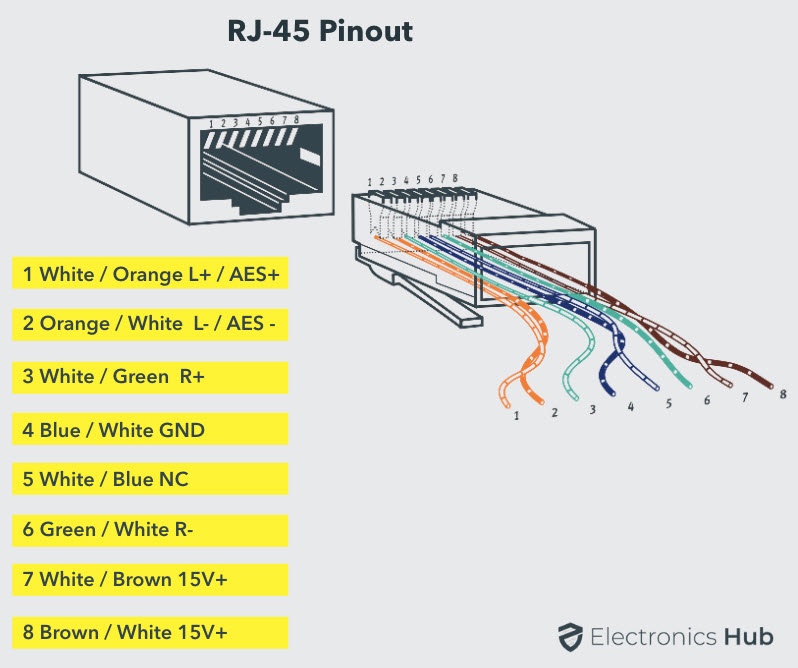 RJ-11 is another type of Registered Jack that is used as an interface for telephone, modem or ADSL connections. Even though computers are almost never equipped with an RJ-11 port, they are the main interface in all telecommunication networks. 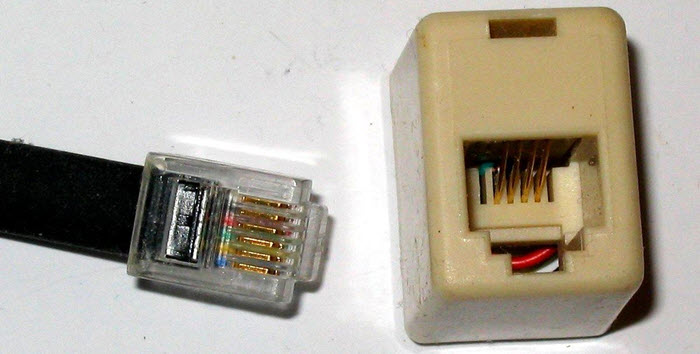 The following image can be used to compare RJ-45 and RJ-11 ports.

e-SATA is an external Serial AT Attachment connector that is used as an interface for connecting external mass storage devices. Modern e-SATA connector are called e-SATAp and stands for Power e-SATA ports.

They are hybrid ports capable of supporting both e-SATA and USB. Neither the SATA organization nor the USB organization has officially approved the e-SATAp port and must be used at user’s risk.

The above image is of an e-SATAp port. It shows that both e-SATA and USB devices can be connected.