What are the Different Types of Batteries?

In this tutorial, we will learn about one of the important components in Electrical and Electronic Systems: A Battery. We will see some basic information about a battery, take a look at different types of Batteries and also a guide on what Battery Type is suitable for your application.

Whether you are an Electrical Engineer or not, you might have come across at least a couple of different types of batteries in your life. Some of the common places where you use batteries are a wall clocks, alarms or smoke detectors, which uses small disposable batteries or cars, trucks or motor cycles, which uses relatively large rechargeable batteries.

Batteries have become a very important source of energy in the last decade or so. Even before that, they were an integral part of our lives in powering several portable devices like transistor radios, Walkman, handheld games, cameras etc.

But with the development in advanced smart phones, tablets, laptops, solar energy and electric vehicles, the research into powerful batteries that can last longer and can deliver the necessary energy has been at its peak.

As a matter of fact, the 2019 Nobel Prize in Chemistry has been awarded to three scientists John B. Goodenough, M. Stanley Whittingham and Akira Yoshino for the development of lithium-ion batteries.

What is a Battery?

A Battery is a chemical device that stores electrical energy in the form of chemicals and by means of electrochemical reaction, it converts the stored chemical energy into direct current (DC) electric energy. Alessandro Volta, an Italian Physicist, invented the first battery in 1800.

The electrochemical reaction in a battery involves transfer of electrons from one material to another (called electrodes) through an electric current.

In its basic form, a cell typically contains three main components: two electrodes and electrolyte and also consists of terminals, separator and a container. Speaking of electrodes, there are two types of electrodes called the Anode and the Cathode.

The Anode is the negative electrode (also called the Fuel Electrode or the Reducing Electrode). It loses electrons to the external circuit and in the electrochemical reaction, it gets oxidized.

Cathode on the other hand, is the positive electrode (also called the Oxidizing Electrode). It accepts electrons from the eternal circuit and in the electrochemical reaction, it gets reduced. Hence, the energy conversion in a battery is due to electrochemical oxidation-reduction reaction.

A battery often consists of one or more “cells” that are electrically connected in either a series or parallel configuration to provide the necessary voltage and current levels.

Basically, all the electrochemical cells and batteries are classified into two types:

A Primary Battery is one of the simple and convenient sources of power for several portable electronic and electrical devices like lights, cameras, watches, toys, radios etc. As they cannot be recharged electrically, they are of “use it and when discharged, discard it” type.

Usually, primary batteries are inexpensive, light weight, small and very convenient to use with relatively no or less maintenance. Majority of the primary batteries that are used in domestic applications are single cell type and usually come in cylindrical configuration (although, it is very easy to produce them in different shapes and sizes).

Up until the 1970’s, Zinc anode-based batteries were the predominant primary battery types. During the 1940’s, the World War II and after the war, Zinc – Carbon based batteries and they have an average capacity of 50 Wh / kg.

Most significant development in the battery technology took place during the 1970 – 1990 period. It is during this time, the famous Zinc / Alkaline Manganese Dioxide batteries were developed and they slowly replaced the older Zinc – Carbon types as the main primary battery. 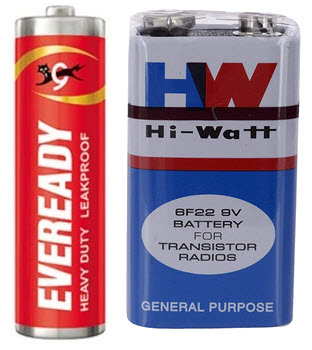 Zinc – Mercuric Oxide and Cadmium – Mercuric Oxide batteries were also used during this period but due to the environmental concerns with respect to the usage of Mercury, these battery types slowly phased out.

It is during this period, where the development of batteries with Lithium as active anode material has been started and is considered a major accomplishment due to the high specific energy and longer shelf life of Lithium batteries over traditional Zinc batteries.

Lithium batteries are manufactured as button and coin cell for a specific range of applications (like watches, memory backup, etc.) while larger cylindrical type batteries are also available.

The following table shows different types of primary batteries along with their characteristics and applications.

A Secondary Battery is also called as Rechargeable Battery as they can be electrically recharged after discharge. The chemical status of the electrochemical cells can be “recharged” to their original status by passing a current through the cells in the opposite direction of their discharge.

Basically, secondary batteries can be used in two ways:

The first and the most commonly used rechargeable batteries are called Lead – Acid Batteries. They are based on the Lead – Lead Dioxide (Pb – PbO2) electrochemical couple. The electrolyte used in these types of batteries is the very common Sulfuric Acid.

The second type of the rechargeable batteries are called Nickel – Cadmium Batteries. They are based on Nickel Oxyhydroxide (Nickel Oxide) as the positive electrode and Cadmium metal based negative electrode. Coming to the electrolyte, an alkaline solution of Potassium Hydroxide is used.

In the recent decades, two new types of rechargeable batteries have emerged. They are the Nickel – Metal Hydride Battery and the Lithium – Ion Battery. Of these two, the lithium – ion battery came out to be a game changer and became commercially superior with its high specific energy and energy density figures (150 Wh / kg and 400 Wh / L).

There are some other types of Secondary Batteries but the four major types are:

Let us now briefly see about these battery types individually.

One of the major applications od lead-acid batteries are in the automotive industry as they are primarily used as SLI Batteries (Starting, Lighting and Ignition).

Electrical efficiency of lead-acid batteries is between 75 to 80%. This efficiency value them suitable for energy storage (Uninterrupted Power Supplies – UPS) and electric vehicles.

The Nickel – Cadmium Batteries or simply Ni-Cd Batteries are one of the oldest battery types available today along with the lead-acid batteries. They have a very long life and are very reliable and sturdy. 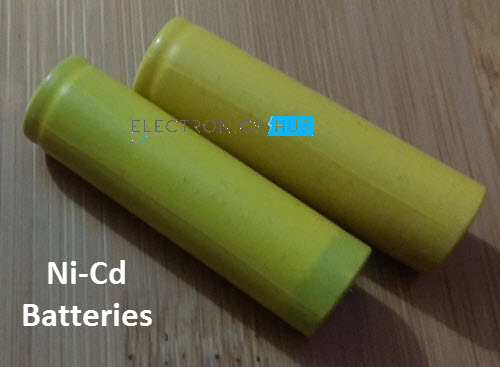 One of the main advantages of Ni-Cd Batteries is that they can be subjected to high discharge rates and they can be operated over a wide range of temperatures. Also, the shelf life of Ni-Cd batteries is very long. The cost of these batteries is higher that lead-acid batteries on per Watt-hour basic but it is less that other type of alkaline batteries.

Unfortunately, there is one major characteristic of Ni-Cd batteries called the “memory effect”, which is their only disadvantage. When Ni-Cd cells are discharged partially and then recharged, they lose their capacity progressively i.e., cycle-by-cycle. “Conditioning” is the process where the lost capacity of the batteries can be restored.

In this process, the cells are completely discharged to zero volts and then fully recharged.

These are relatively new type of batteries are an extended version of Nickel – Hydrogen Electrode Batteries, which were exclusively used in aerospace applications (satellites). The positive electrode is the Nickel Oxyhydroxide (NiOOH) while the negative electrode of the cell is a metal alloy, where hydrogen is stored reversibly. 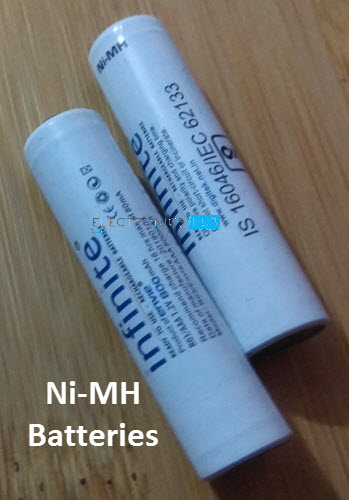 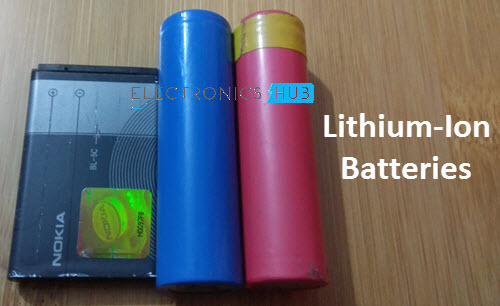 In the last few decades, the usage of small sealed batteries in consumer applications has been exponential. Primary or rechargeable batteries in small form factor are being used in a huge number of appliances. Some of them are mentioned below.

How to Choose a Battery?

This was a brief introduction to Battery, Different Types of Batteries, Primary and Secondary Batteries, Rechargeable and Non-Rechargeable Batteries and also few common applications of each type of battery.