In this tutorial, we will learn about one of the important circuits in analog circuit design: A Differential Amplifier. It is essentially an electronic amplifier, which has two inputs and amplifies the difference between those two inputs. We will see the working of a Differential Amplifier, calculate its gain and CMRR, list out some important characteristics and also see an example and an application.

The Differential Pair or Differential Amplifier configuration is one of the most widely used building blocks in analog integrated-circuit design. It is the input stage of every Operational Amplifier.

So, a practical differential amplifier uses a negative feedback to control the voltage gain of the amplifier. 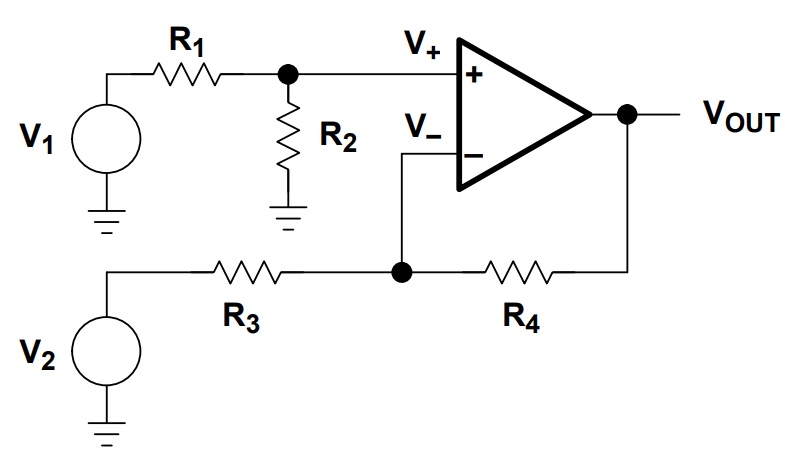 Resistors R1 and R2 form a Voltage Divider Network with V1 as the Input Voltage and V+ as the output voltage and this V+ is applied at the non-inverting terminal. So,

If V+ is the input to the non-inverting terminal and G+ is the gain of the Non-Inverting Amplifier, then non-inverting output VOUT+ is given by:

From the above circuit, we can calculate the Non-Inverting Gain G+ as:

Using the values of V+ and G+ in the equation of VOUT+, we get

From the above circuit, we can calculate the Inverting Gain G– as:

We have both VOUT+ and VOUT– values. To get the final VOUT value, we have to add these values.

This is the output voltage of a Differential Amplifier. The above equation looks complex. So, to reduce the complexity and simply the equation, let us take a special case where R3 = R1 and R4 = R2.

If we apply these values in the above equation, we the output voltage as:

Now, from this equation, it is clear that the differential voltage (V1 – V2) is multiplied by the gain R2 / R1. Hence, it is Differential Amplifier.

Let us now calculate the output voltage by determining the current at the Inverting Input of the Op Amp. Let us assume the following circuit for a Differential Amplifier. This circuit is similar to the previous one, except this a special case of R3 = R1 and R4 = R2 of the previous circuit. 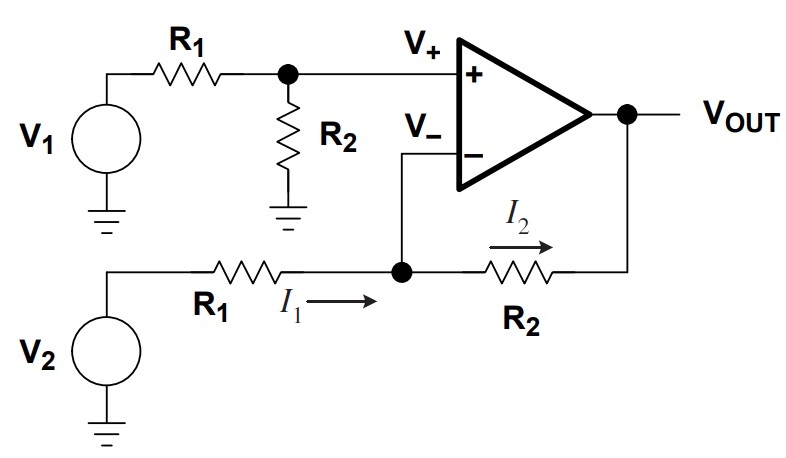 First, we have to determine the voltage at the Non-Inverting terminal (V+). We already calculated this in the previous derivation using the voltage divider rule. The value is given by:

Now, from the basic understanding of the Operational Amplifier, we can say that no current flows in or out of the Op Amp input terminals.  So, the current entering the Inverting Terminal I1 is same as the current leaving the terminal I2.

Using this rule as a reference, we can apply Kirchhoff’s Current Law at the Inverting Input Terminal and we get:

Another important rule about Operational Amplifier is that it tries to keep the Input Terminals at same voltage. So, V+ = V–. Using this rule, we can replace V– in the above equation with the previously calculated V+ value.

After replacing and performing some calculations, we arrive at:

NOTE: In all the previous calculations, we took a special as R3 = R1 and R4 = R2. Actually, instead of this we have to consider the ratios i.e.,

If this condition is used, then the resistances are said to be in a Balanced Bridge.

Let us now see some of the important parameters of a Difference Amplifier. They are:

The gain of a difference amplifier is the ratio of the output signal and the difference of the input signals applied. From the previous calculations, we have the output voltage VOUT as

So, Differential Amplifier Gain AD is given by

In all the previous calculations, we assumed the Balanced Bridge condition i.e., R3 / R4 = R1 / R2. To understand a unique characteristic of the Differential Amplifier or Difference Amplifier, we have to take a look at the Differential Mode Input and Common Mode Input Components.

Rearranging the above two equations, we get 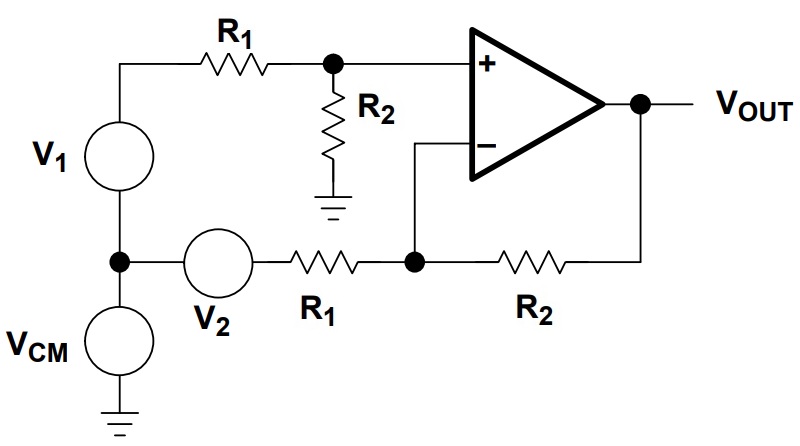 As the Difference Amplifier amplifies only the Difference Mode component, it ignores the Common Mode Component. If we tie the inputs together, the VDM becomes 0 and the VCM is a non-zero value.

All these calculations are true if and only if the Resistances form the Balanced Bridge Condition. Since the output of a practical difference amplifier depends upon the ratio of the input resistances, if these resistor ratios are not exactly equal, the common mode voltage VCM will not be completely cancelled. Because it is practically impossible to match resistor ratios perfectly, there is likely to be some common mode voltage.

With the common mode input voltage present, the output voltage of the differential amplifier is given as,

Where VDM is the difference voltage V1 – V2

In terms of decibels (dB), the CMRR is expressed as

For an ideal Difference Amplifier, the common mode voltage gain is zero. Hence, the CMRR is infinite.

Characteristics of a Differential Amplifier

A Differential Amplifier circuit is a very useful Op Amp circuit, since it can be configured to either “add” or “subtract” the input voltages, by suitably adding more resistors in parallel with the input resistors.

A Wheatstone Bridge Differential Amplifier circuit design is as shown in the following image. This circuit behaves like a Differential Voltage Comparator.

By connecting one input to a fixed voltage and the other to a thermistor (or a light-dependent resistor), the differential amplifier circuit detects high or low levels of temperature (or intensity of light) as the output voltage becomes a linear function of the changes in the active leg of the resistive bridge network.

A Wheatstone Bridge Differential Amplifier can also be used to find the unknown resistance in the resistive bridge network, by comparing the input voltages across the resistors.

The circuit shown in the following image acts as a light-dependent switch, which turns the output relay either “ON” or “OFF” as the intensity of the light falling upon the light-dependent resistor (LDR) exceeds or falls below a pre-set value at the non-inverting input terminal V2. 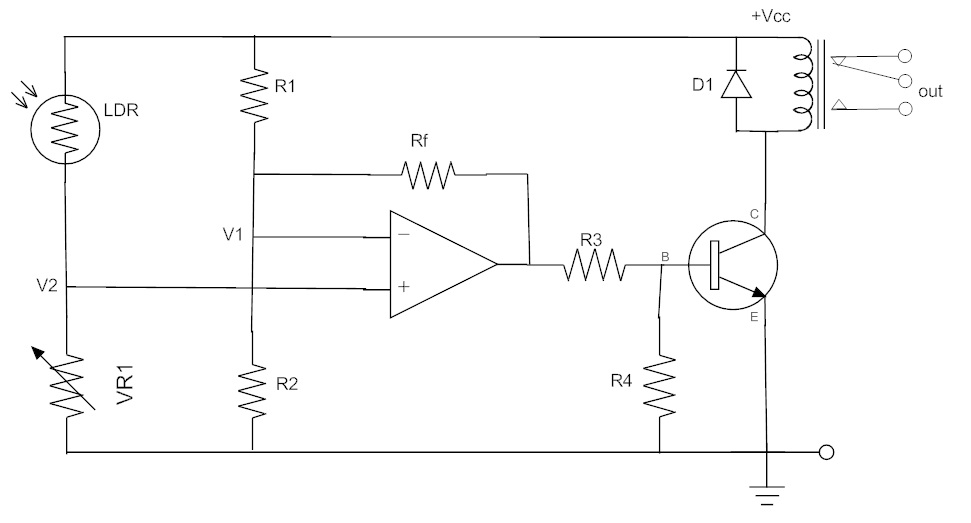 The voltage V2 is determined by the variable resistor VR1. The resistors R1 and R2 act as a potential divider network. A fixed reference voltage is applied to the inverting input, through R1 and R2.

The same circuit can be modified to detect variations in temperature, simply by replacing the LDR with a Thermistor. By interchanging the positions of LDR and VR1, the circuit can be made to detect dark or light (or heat or cold in case of a thermistor).

The differential amplifier for the given data is represented as shown in the figure. 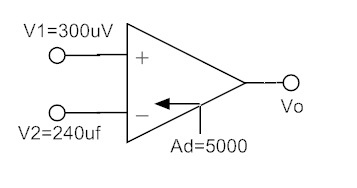