Operational Amplifier or simply Op-amp is one of the most frequently and widely used electronic component. They are the main building blocks in Analog Circuits and are used in a wide range of consumer electronics, industrial equipment and scientific devices.

The operational amplifier is called so because it has its origins in analog computers, and was mainly used to perform mathematical operations.

Depending on its feedback circuit and biasing, an op-amp can be made to add, subtract, multiply, divide, negate, and interestingly even perform calculus operations like differentiation and integration.

Today, op-amps are very popular building blocks in electronic circuits. Op-amps are used for a variety of applications such as AC and DC signal amplification, filters, oscillators, voltage regulators, comparators and in most of the consumer and industrial devices. 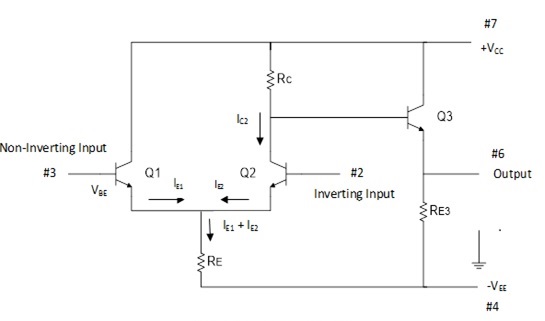 The basic circuit of an operational amplifier is as shown in the figure above. An op-amp has a differential amplifier input stage and emitter follower output stage. Practical op-amp circuits are much more complicated than the above shown basic op-amp circuit.

Transistors Q1 and Q2 forms a differential amplifier, where the difference input voltage is applied to the base terminals of Q1 and Q2. Transistor Q3 operates as an emitter follower and provides low output impedance.

The output of the basic op-amp circuit VOUT is given as,

Where, VRC is the voltage across the resistor RC and VBE3  is the base-emitter voltage of transistor Q3.

If both Q1 and Q2 bases connected to ground,

The base of Q2 is grounded, so the positive voltage at its emitter causes a reduction in its base-emitter voltage VBE2 . The reduction in VBE2  causes the emitter current IE2 to decrease and consequently IC2 also reduced.

It can be noted that a positive input at pin #3 gives a positive output, hence the name non-inverting input terminal. 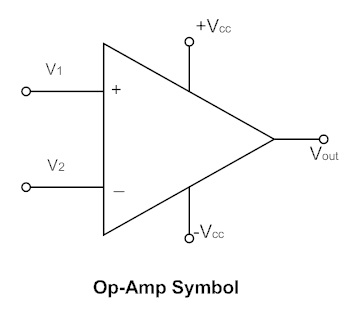 All op-amps consist of a differential amplifier at their input stage. If two different voltage signals are applied to the two input terminals of the op-amp, the resulting output signal is proportional to the “difference” between the two signals. 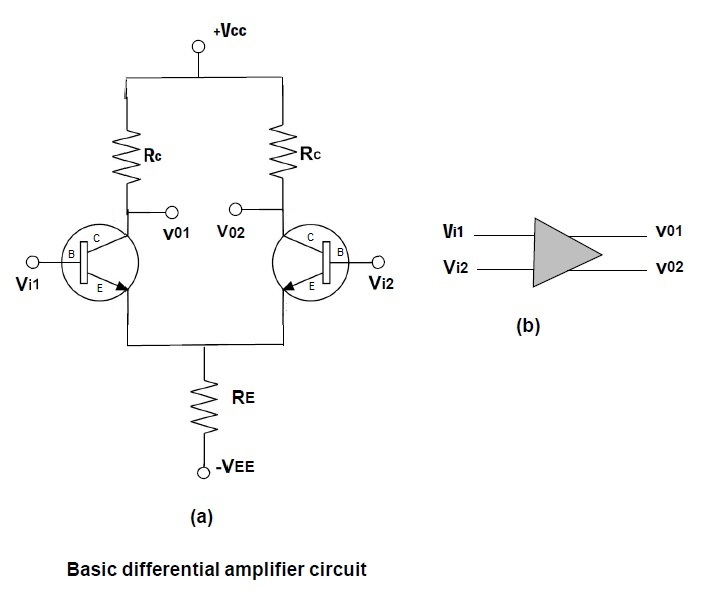 The two transistors Q1 and Q2 have identical characteristics. The two input signals Vi1 and Vi2 are applied to the base terminals of Q1 and Q2 respectively. Note that the differential amplifier has two output terminals VO1 and VO2 .

The output VO is given by,

Where  AD  is the differential gain.

A differential amplifier can be configured in four different ways:

When the same input voltage signal is applied to both the input terminals, the operation is referred to as “common-mode” operation. The common mode signal is usually an interference or static signal.

While a differential amplifier provides large amplification of the difference voltage applied to both the inputs, it discriminates against common mode input signals i.e. it refuses to amplify common mode signals.

The ability of a differential amplifier to reject a common mode signal is expressed in terms of its common mode rejection ratio (CMRR).

Higher value of CMRR represents its better ability to reject common mode signals. Thus any undesired signal such as noise or an interference pickup would appear as common to both the input terminals and the effect of this signal on the output would be zero.

Equivalent Circuit of an Ideal Op-Amp 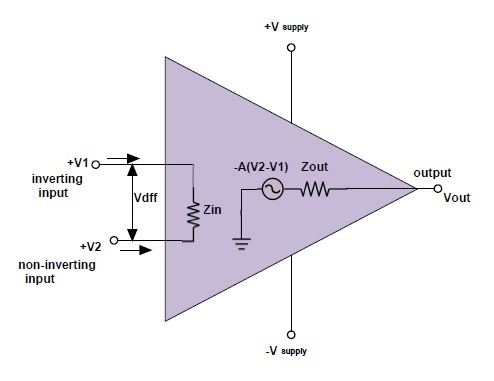 The equivalent circuit of an ideal op-amp is shown above. The input voltage VDIFF is the difference voltage (V1-V2). Zin is the input impedance and Zout is the output impedance.

The gain parameter A is called the open loop gain. If an op-amp does not have any feedback from the output to either of the inputs, it is said to be operating in open-loop configuration.

Where, Zin  is the input impedance without feedback

AOL  is the open-loop gain

β is the feedback factor (1 for voltage follower)

The impedance of the signal sources connected to the input of an op-amp must be very much smaller than the amplifier input impedance to avoid signal loss.

An ideal op-amp has zero output impedance. This means that the output voltage is independent of output current. Thus an ideal op-amp can act as a perfect internal voltage source with zero internal resistance, so that maximum current can be driven to the load.

Practically, the output impedance of the op-amp is affected by the negative feedback and is given by,

Zo is the output impedance of op-amp without feedback

AOL is the open-loop gain

β is the feedback factor

Load impedances connected at the output of the op-amp must be much larger than the circuit output impedance, to avoid any significant loss of output as a voltage drop across Zout.

Open-loop gain of an op-amp is defined as the gain of the op-amp when there is no feedback from the output to either of its inputs. For an ideal op-amp, the gain will be infinite theoretically, but practical value range from 20,000 to 200,000.

An ideal op-amp can amplify any frequency signal from DC to highest AC frequencies, thus it has an infinite frequency response. Therefore, the bandwidth of an ideal op-amp should be infinite.

In practical circuits, the bandwidth of the op-amp is limited by the gain-bandwidth product (GB).

CMRR is defined as the ability of an op-amp to reject the common mode input signal. CMRR is an important measure of an op-amp. An ideal op-amp will have infinite CMRR. In practical circuits, CMRR is given by

Where, AD is the differential gain and AC is the common mode gain of the op-amp.

The input offset voltage defines the differential DC voltage required between the input terminals to make the output zero volts with respect to ground. An Ideal op-amp will have zero offset voltage, whereas practical op-amps show some small offset.

Slew rate is defined as the maximum change of output voltage per unit time and is expressed as volts per second.

An ideal op-amp will have an infinite slew rate. In practical op-amps, the slew rate is inherently limited by the small internal drive currents of the op-amp and also by the internal capacitance designed to compensate for high frequency oscillations.

The open loop gain AOL is not constant for all frequencies. Real op-amps have a frequency-dependent open-loop gain. The frequency response curve of a practical op-amp is as shown below. 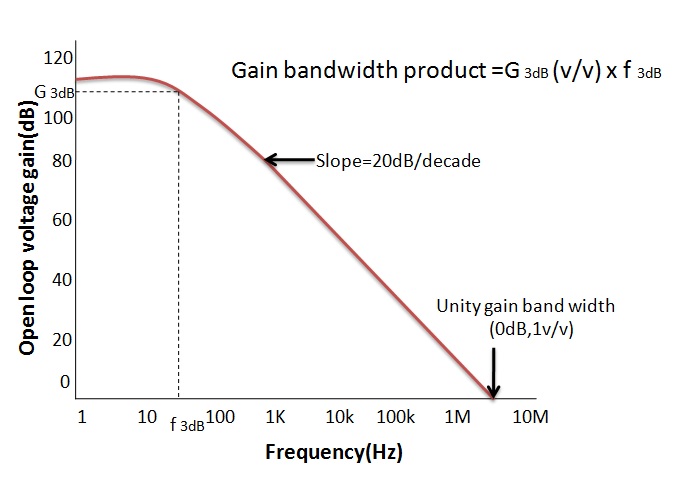 The bandwidth of the operational amplifier is defined as the frequency range over which the voltage gain of the amplifier is above -3dB (maximum is 0dB) of its maximum output value. 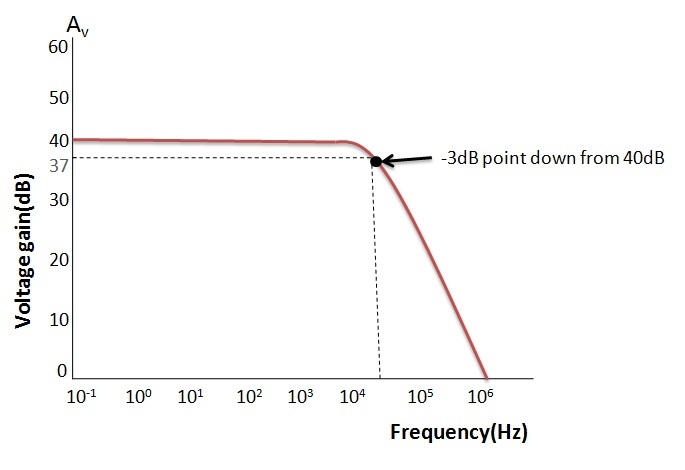 In the above figure, the -3dB of the AV(max) is shown as 37dB. The 37dB line intersects with the curve at just over 10 kHz frequencies. This frequency can be more accurately calculated if the GB product of the amplifier is known.

The rate of fall of the gain in op amp is known to be 20 dB per decade.