Operational amplifiers can be configured to work as a variety of functional circuits such as amplifiers, oscillators, voltage regulators, filters, rectifiers etc. Most of these circuit configurations require the op-amp output to be connected back to its input. 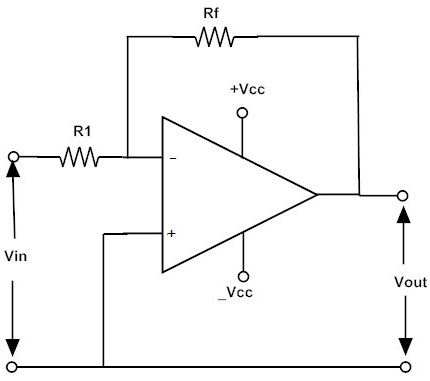 When a positive-going voltage is applied at the inverting input (base of transistor Q2), the current at the collector terminal of Q2 is increased and the voltage drop across RC is also increased. This effect drives the output voltage low because the non-inverting input terminal (base of Q1) is grounded. The base of Q2 will be pulled down to ground level by negative feedback, irrespective of the input voltage applied. Thus, when Vin is applied, the output Vout changes to a level that keeps the inverting input terminal at the ground level. For this reason, the inverting input terminal in this circuit configuration is referred to as Virtual Ground. The junction of resistors R1 and Rf always remain at ground level due to the virtual ground. Ignoring the small bias current that flows into the op-amp circuit, the current I flows through both the resistors R1 and Rf. The input and output voltages can be calculated as,

The negative sign of the closed-loop gain equation indicates that the output is inverted with respect to the input applied.

In a practical inverting amplifier, the non-inverting input is not connected to ground directly. It should be grounded by a resistor with the same value as R1 to keep the input currents equal. This gives a better chance of the output voltage being zero (or close to 0) volts when the input is zero volts. 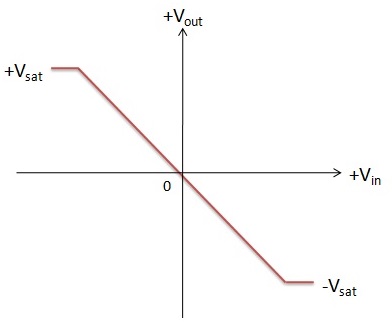 The voltage characteristics, or the transfer curve, of an op-amp is as shown in the figure above. It can be noted that when the input signal VIN is positive, the output VOUT is negative and vice versa. Also, the output changes linearly with respect to input applied. The characteristic curve saturates, or in other words the output becomes a constant, when the input signal amplitude goes beyond the positive and negative power supplies applied to the operational amplifier.

1. Design an inverting amplifier with a gain of -10 and input resistance equal to 10kΩ.

Given are the values of amplifier gain and input resistance.

We know that for an inverting amplifier​, ACL = – Rf/R1 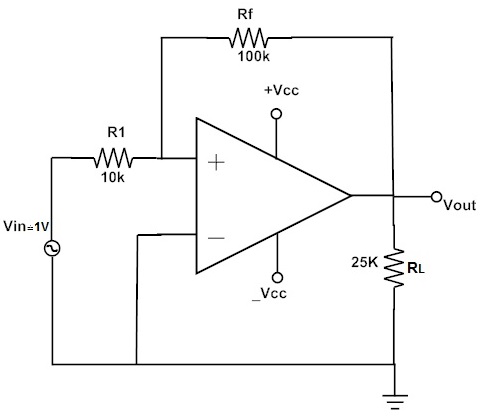 (i) Input Current i1

A simplest trans-impedance amplifier will have a feedback resistor whose value is very large. The gain of the amplifier is dependent on this resistor. Depending on the application, trans-impedance amplifiers can be configured in various ways. All these different configurations convert the low-level current of a sensor to a significant voltage level. The gain, bandwidth and voltage/current offset values change with different types of sensors. 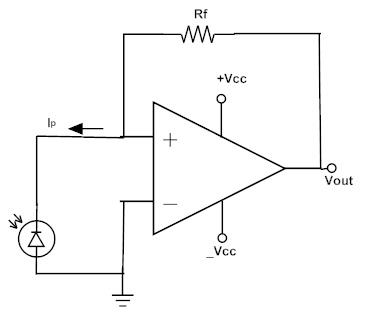 It can be noted that

When the effect of this low pass filter is considered, the circuit’s response equation becomes

Where, AOL is the open-loop gain of the op-amp.