Fire Alarm Circuit is a simple circuit that detects the fire and activates the Siren Sound or Buzzer. Fire Alarm Circuits are very important devices to detect fire in the right time and prevent any damage to people or property.

Fire Alarm Circuits and Smoke Sensors are a part of the security systems which help in detecting or preventing damage. Installing Fire Alarm Systems and Smoke Sensors in commercial buildings like offices, movie theatres, shopping malls and other public places is compulsory.

There are many expensive and sophisticated Fire Alarm Circuit in the form of stand-alone devices, but we have designed five very simple Fire Alarm Circuits using common components like Thermistor, LM358, Germanium Diode, LM341 and NE555.

We will see all these circuit, their circuit diagrams, components required for each circuit and the working of the individual circuit in the following sections. 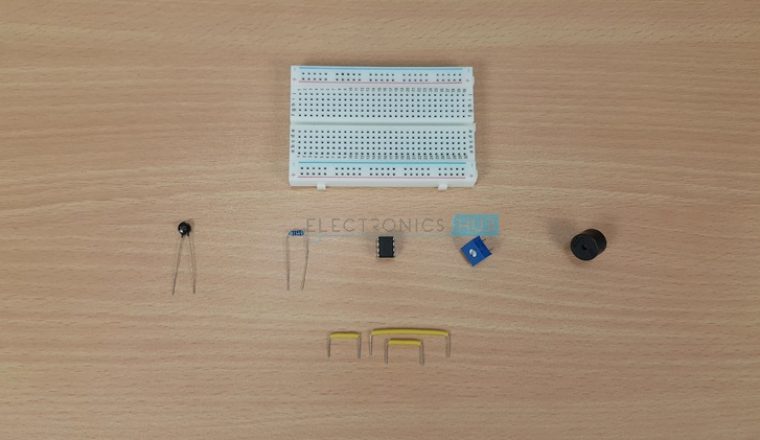 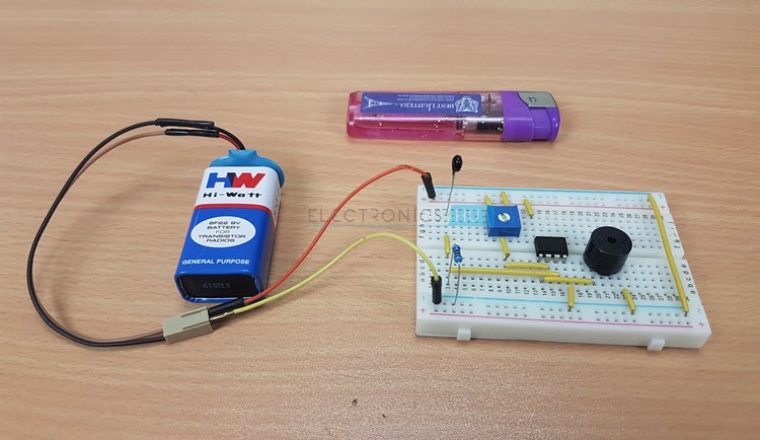 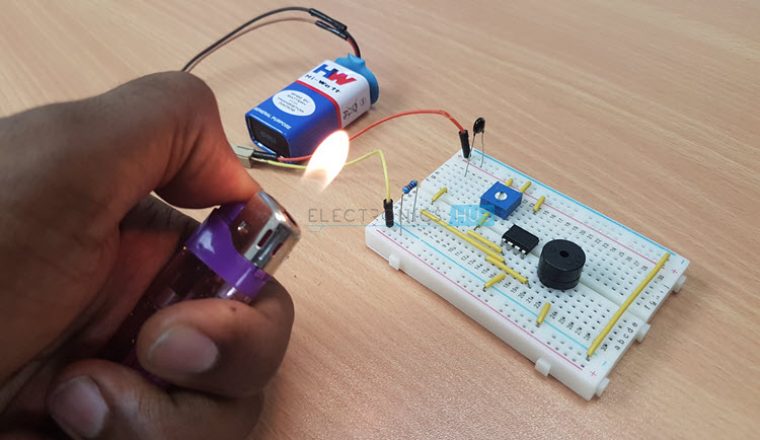 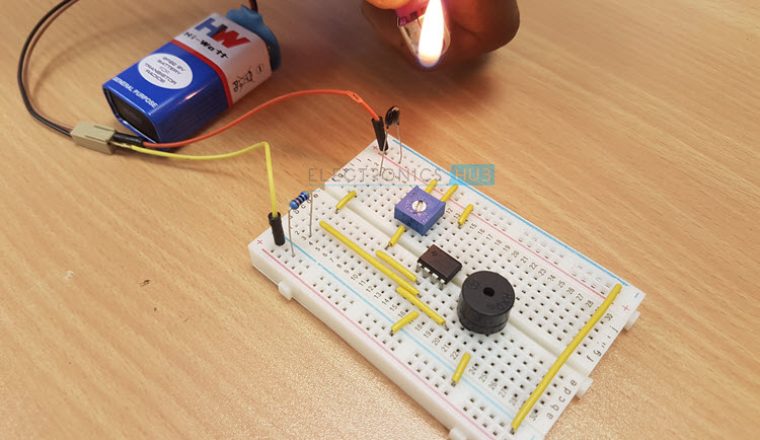 This is a very simple alarm circuit using Thermistor, LM358 Operational – Amplifier and a Buzzer.

The circuit diagram of this simple Fire Alarm Project is shown in the following image. 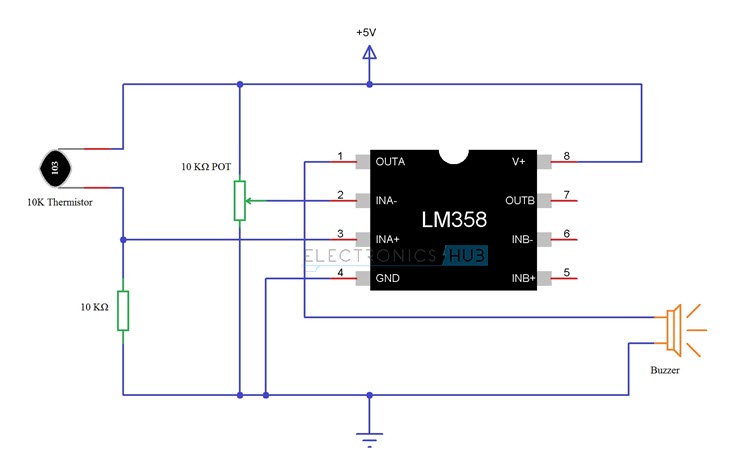 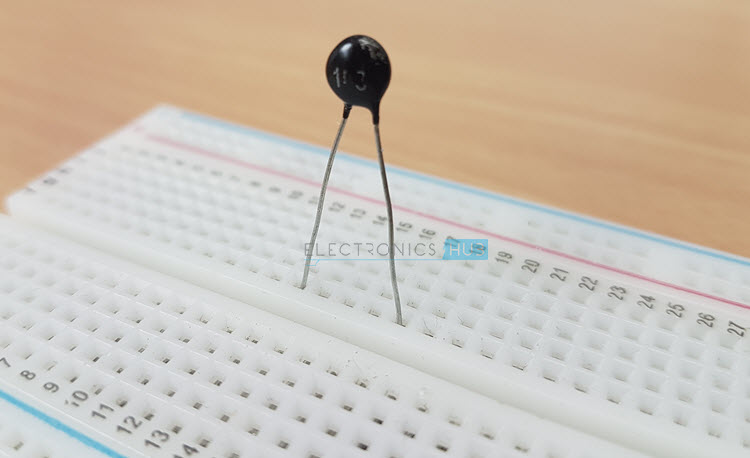 LM358 is a Dual Operational Amplifier (Op – Amp) IC. All the functional modes of the typical operational amplifier can be implemented using LM358 IC. In this project though, we will be using the LM358 Operational Amplifier in the Comparator Mode where the input signals on inverting and non – inverting terminals are compared and corresponding output is produced.

We will now make a potential divider using 10 K Thermistor and 10 KΩ Resistor. The output of this potential divider i.e. the junction point is connected to the non – inverting input of the LM358 Operational Amplifier.

We have chosen a small, 5V buzzer in this project to make the alarm or siren sound. So, connect the output of the LM358 Op – amp to the 5V Buzzer directly. 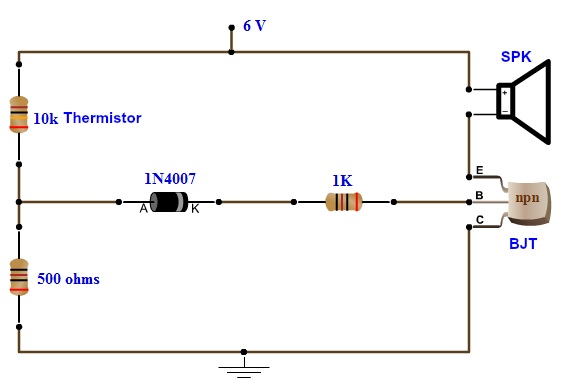 This circuit alerts us when there is a fire accident at home by ringing a siren sound. You might have seen fire alarms earlier but this is quite different as it generates a siren sound instead of a buzzer and also it uses basic components to generate that siren sound.

We are aware that there are many integrated circuits which can be used to generate the siren effect but we preferred to use basic electronics components like resistors, capacitors and transistors to generate it so that you will clearly understand the internal working of it and it will be much useful for you as you will gain more knowledge by analyzing it instead of simply going for pre designed integrated circuits.

This circuit uses a thermistor to sense the temperature. When it senses that the temperature of the environment is increasing above a given threshold, then it gives a signal. The temperature at which the circuit detects fire can be adjusted by using the potentiometer arrangement at VR1.

Get an idea about Thermistor Temperature Sensing Alarm if you are interested.

When the temperature increases above the set value, the potentiometer arrangement produces a high voltage. This voltage is then given to BC547 transistor in common emitter mode. It is an NPN general purpose transistor. When the base is given a high input, it gets turned on. When the transistor is turned on, its collector voltage is reduced to low as the collector to emitter voltage decreases. The collector output voltage of the first transistor is given to the base as an input to the second BC 547 NPN transistor. This transistor too is in common emitter mode and as the input is low when the temperature threshold is reached, the output at the collector will rise high. In this state, it will turn on the next transistor, i.e. BC107. This transistor will now act as a switch for the siren circuit. This transistor can bear power quite larger than the BC547 and it is also equipped with a heat sink for that purpose.

When the BC107 transistor turns on, it allows current to pass from power supply to ground through collector thereby acting as an electronically controlled switch. When the current is passing, the siren circuit which is assembled as the load to the circuit is turned ON. Then you can hear the siren sound through the buzzer. The capacitors used in the circuit are the main components in producing the siren effect. The principle involved in generating the siren effect is to make an oscillator with an envelope which periodically increases and decreases so as to generate that effect.

Here is another small project on fire alarm. When a fire accident is happened in home or office, it will detect the fire and give the alarm.

The thermistor is the main component which detects the fire by sudden change in the room temperature because of the heat generated by the fire. The thermistor will detect the heat and give the information to the LM741 OP-AMP. The op-amp will make the NE555 to generate pulse which has been given to a buzzer to buzz.

LM741: LM741 is an operational amplifier which will work according to the difference in the input voltages. LM741 has following features like high current driving, voltage gain, noise amplification and also provide low output impedance. LM741 can also use as a short circuit protection.

Here is the simple fire alarm circuit which costs less than 100 rupees. The key component in the circuit is DR25 (germanium diode) whose resistance will decrease with increase in temperature. The conduction of germanium diode will start at 70 degrees. So we may use germanium diode as a heat sensor. When the temperature is more than 70 degree, the germanium diode will conduct and trigger the NE555 timer through a transistor. The NE555 is configured in astable Multivibrator and make the buzzer to alarm when germanium diode conducts. So that we can get alert and act according to the alarm.