Home Security Systems are an important feature of modern residential and office setups. Home security systems must be affordable, reliable and effective. 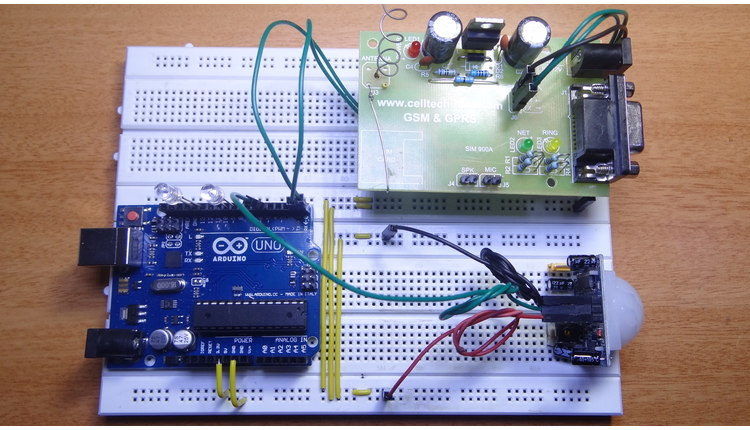 Such complex systems may be expensive and may not be affordable by everyone. There are individual security systems based on the requirement.

In this project, we designed a simple but very efficient home security that has a function of calling the homeowner on his/her mobile number in case of an intruder alert.

Help us in selecting the next DIY Arduino Project. : Select your Favourite Project»

The project is based on Arduino, PIR motion detection sensor and GSM Module. 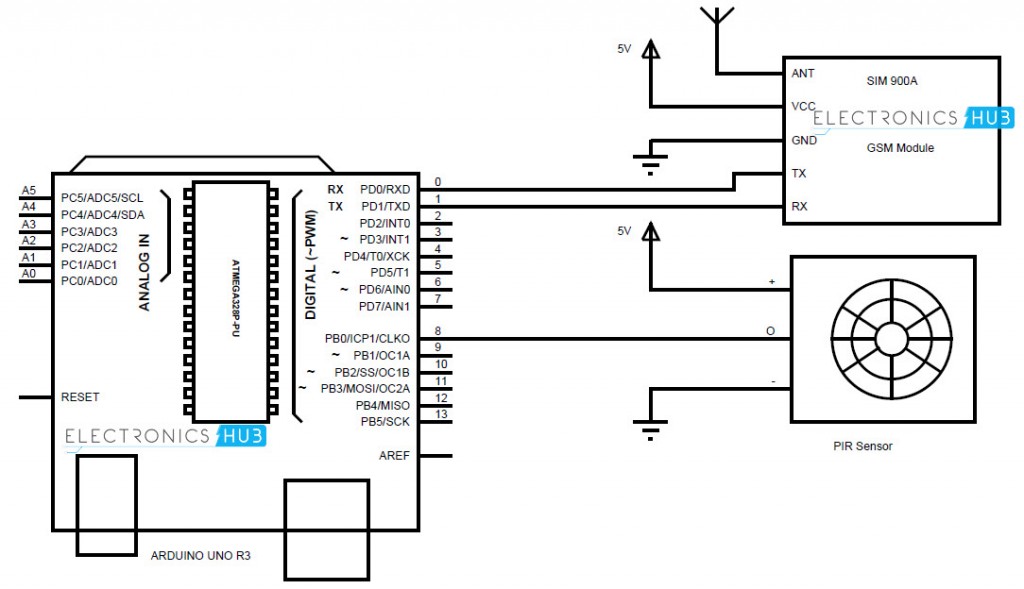 As the project is based on an Arduino, the connection is pretty simple. PIR motion detection sensor module has a digital output pin. This is connected to any of the digital I/O pins of the Arduino.

The GSM Module communicates with the microcontroller in a serial manner. It has an Rx and Tx pins on the board. These pins are connected to the Tx and Rx pins of the Arduino.

It is important to note that while uploading the program (sketch) to Arduino, the GSM module must be disconnected as it might interfere with the serial communication with the Arduino IDE.

Passive Infra-Red or PIR Sensor is a Pyroelectric device that detects motion. Hence, it is also called as motion detection sensor. It detects motion by sensing the changes in infrared levels emitted by nearby objects.

SIM 900A is the GSM/GPRS module with built in RS232 interface. It has dual band GSM/GPRS system that works on 900/1800MHz frequencies.

With the help of RS232, the modem can be connected to PC or microcontroller via serial cable. Voice calls, SMS and internet access are possible with this module.

There are on board connections for microphone and headphones with which we can make or receive calls.

Home Security Alarm Systems are very important in present day society, where crime is increasing. With the technological advancements we have achieved in the recent years, a homeowner doesn’t have to worry about home security while getting off his/her home.

The aim of this project is to implement a simple and affordable, but efficient home security alarm system. The project is designed for detecting intruders and informing the owner by making a phone call.

The working of the project is explained below.

PIR sensor detects motion by sensing the difference in infrared or radiant heat levels emitted by surrounding objects. The output of the PIR sensor goes high when it detects any motion. The range of a typical PIR sensor is around 6 meters or about 30 feet.

For proper operation of PIR sensor, it requires a warm up time of 20 to 60 seconds. This is required because, the PIR sensor has a settling time during which it calibrates its sensor according to the environment and stabilizes the infrared detector.

During this time, there should be very little to no motion in front of the sensor. If the sensor is not given enough calibrating time, the output of the PIR sensor may not be reliable.

When the PIR sensor detects any motion, the output of the sensor is high. This is detected by the Arduino. Arduino then communicates with the GSM module via serial communication to make a call to the pre programmed mobile number.

An important point to be noted about PIR sensors is that the output will be high when it detects motion. The output of the sensor goes low from time to time, even when there is motion which may mislead the microcontroller into considering that there is no motion.

This issue must be dealt with in the programming of Arduino by ignoring the low output signals that have a shorter duration than a predefined time. This is done by assuming that the motion in front of PIR sensor is present continuously.