This circuit is a temperature sensing as well as alarm circuit. The circuit raises an alarm whenever the temperature crosses a certain limit. Temperature monitoring is a very important and frequently used application in industries and in many other places where the temperature should be kept below a maximum allowable level. This circuit comes to our rescue when a situation of that sort arises.

The circuit is made to be low cost and reliable so that you can make it with less resources and without compromising on the performance. Although it is not an industry level calibrated circuit, it is quite sufficient where it is not a mission critical application. Another advantage of this circuit is that the circuit has a flexibility to adjust the temperature level to which it should be set. This means that you can set the temperature above which the circuit should activate the alarm.

Do you know how a High and Low Voltage Cutoff with Delay Alarm Circuit Works? 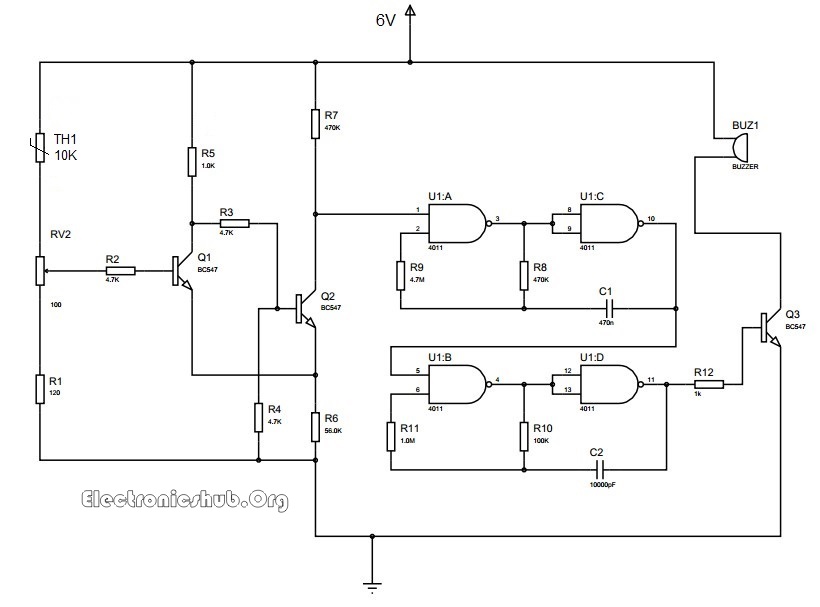 The circuit makes use of two BC547 NPN transistors to switch the alarm when the temperature above desired value is detected. The IC 4011 which is used in the circuit is a quad NAND gate integrated circuit. It has four NAND gates assembled in the single IC itself. This reduces the space and complexity of the circuit.

The combinational circuit which is built using the NAND gates is an oscillator circuit. As we know, any combinational circuit has an inherent time delay between the input and the output. This time delay is usually considered as undesirable but in this case we are making use of it to make it work like an oscillator. The circuit turns on and off repeatedly with a time delay operating as a square wave oscillator. The output of the oscillator is given to a buzzer which thereby operates at the audio frequency. The capacitors used in the circuit acts as filters to remove unwanted components of the signals and hence ensuring stability and proper operation.