In this simple DIY Project, I will show you how to design and implement a PIR Sensor based Security Alarm System. I have designed this circuit using Arduino as the main controller and of course the PIR Sensor itself. Additionally, I have used UM3561 IC, which is a Siren Generator IC, to produce the necessary Alarm sound through a Speaker. 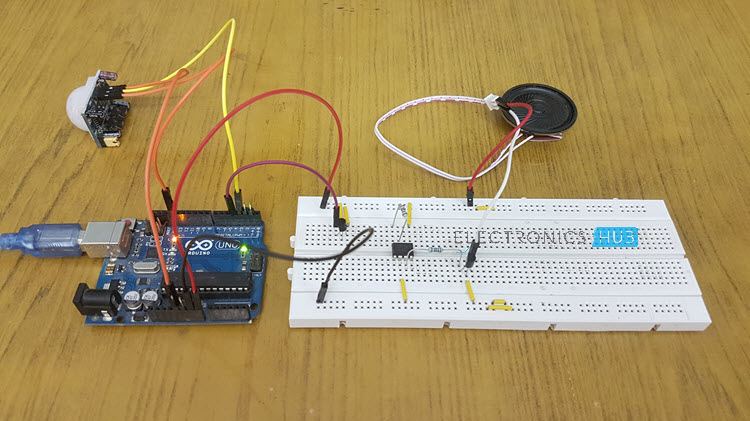 Generally, in security systems that are used in homes, shops, offices, etc., infrared or laser transmitters and receivers are used for accuracy and reliability. But these methods require a lot of monetary investment and infrastructure support.

A simple cost effective solution for Security Systems is implemented in this project where I will explain about a PIR based Security Alarm System, in which a PIR sensor is used instead of transmitter or receiver. This saves power consumption as well as it is a low cost implementation. PIR sensor is the short form of Passive Infrared Sensor.

The main idea of the circuit is to provide security. This is based on PIR sensor with an IC that produces siren. The PIR sensor detects the IR radiations emitted from the humans and it produces a digital output. This digital output is applied to the Arduino UNO.

Based on the digital signal from the PIR Sensor, Arduino UNO then triggers the UM 3561 siren IC. Thus it produces the sound when any human is detected.

The designed system consists of Arduino UNO, PIR sensor, UM3561 IC, Speaker, transistor and a couple of resistors. The UM3516 IC is a Siren generator IC. It has 8 pins. First and sixth pins are the Sound effect selection Pins. Based on how they are connected, you can choose between 4 different types of sounds.

In this project, I have left open both the Pin 1 and Pin 6 to produce a Police Siren. Pin 5 is connected to +5V through an NPN Transistor (which is activated by Arduino UNO’s Pin 4).

Coming to the PIR Sensor, its output is connected to Pin 3 of Arduino. 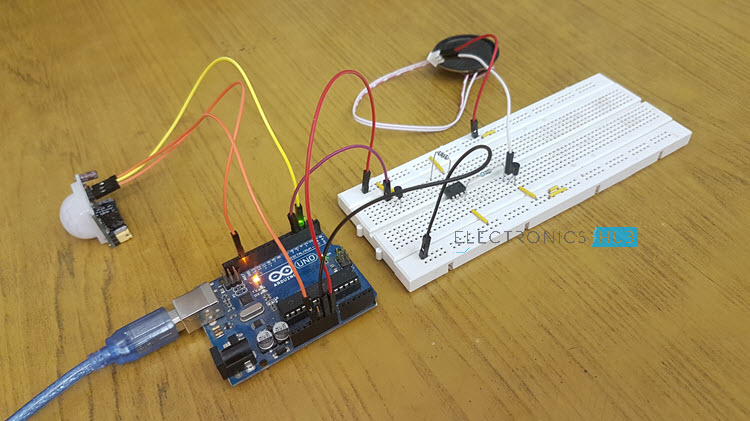