A comparator, in electronics, is a circuit configuration that compares two voltages (or currents) and indicates which one is larger. Thus, the inputs to a comparator should be different in nature. Comparators can be easily configured using op-amps, since the op-amps have high gain and balanced difference inputs. 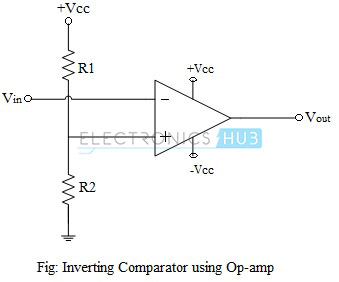 The input and output waveforms of an op-amp inverting comparator is shown in the figure below. 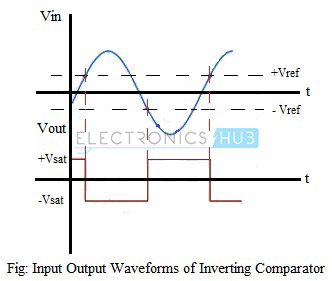 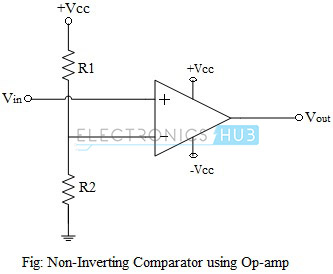 An operational amplifier can be configured to function as a Logarithmic amplifier, or simply Log amplifier. Log amplifier is a non-linear circuit configuration, where the output is K times the logarithmic value of the input voltage applied. Log amplifiers find the applications in computations such as multiplication and division of signals, computation of powers and roots, signal compression and decompression, as well as in process control in industrial applications. A log amplifier can be constructed using a bipolar junction transistor in the feedback to the op-amp, since the collector current of a BJT is logarithmically related to its base-emitter voltage.

The circuit of a fundamental log amplifier using op-amp is shown in the figure above. The necessary condition of the log amplifier to work is that the input voltage always must be positive. It can be seen that Vout = – Vbe.

Since the collector terminal of the transistor is held at virtual ground and the base terminal is also grounded, the voltage-current relationship becomes that of a diode and is given by,

IS = the saturation current,

Since IE = IC for grounded base transistor,

Taking natural log on both sides of the above equation, we get

The output of the circuit is, thus, proportional to the log of the input voltage. However, the output is dependent on the saturation current which varies from transistor to transistor and also with temperature. Compensation circuits can be added to stabilize the output against these variations.

For a grounded base transistor, IE = IC. Therefore,

Where, IS = saturation current of the transistor,

Also, for the above circuit Vin = -Vbe. Therefore,

Antilog amplifiers also suffer from unstable outputs, due to the variations in IS for different transistors and temperature dependence. Compensating circuits can be added to stabilize the output against such variations.

An operational amplifier current-to-voltage converter, also known as a Trans-Impedance amplifier, is a circuit which converts the change in the input current to a corresponding output voltage. The current to voltage converter circuit is most commonly used to amplify the current output of photodiodes, photo-detectors, accelerometers and other sensor devices to a noticeable and usable voltage level.

A simple current-to-voltage converter circuit will have a feedback resistor, with a large value of resistance. The gain of the amplifier is dependent on this resistor. Depending on the application, a current-to-voltage converter can be constructed in different ways. All the configurations convert the low-level current output of a sensor device to a significant voltage level. The gain and the bandwidth of the circuit changes with different types of sensors. 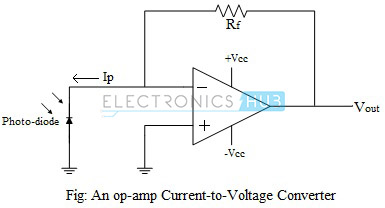 The output voltage of the above circuit can be given as, 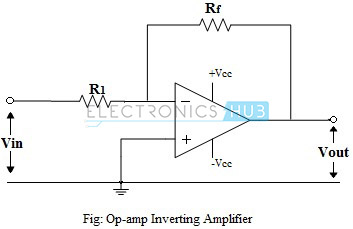 Since the input current to the op-amp is ideally zero, the current I due to the input voltage flows through resistors R1 and Rf. The input and output voltages can be calculated as,

Therefore, the closed-loop gain of the circuit, ACL, is

The input voltage Vin is thus amplified by -Rf/R1 times at the output. It can be noted that if the resistances of both the resistors, R1 and Rf, are equal then the output voltage is,

Such a circuit is known as an inverting buffer, or simply an Inverter. 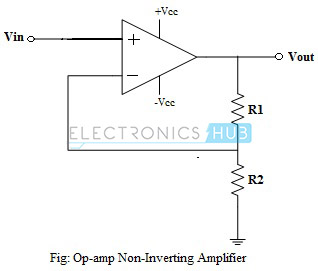 Where, I2 is the current flowing at the junction of resistors R1 and R2.

From the above equations of VIN and VOUT, the closed-loop voltage gain of the non-inverting amplifier can be calculated as,

The above gain equation is positive, indicating that the output will be in-phase with the applied input signal. The closed-loop voltage gain of a non-inverting amplifier is determined by the ratio of the resistors R1 and R2 used in the circuit.

Practical non-inverting amplifiers will have a resistor in series with the input voltage source, to keep the input current equal in both input terminals.

This article presents an overview of the wide range of applications of an operational amplifier. An op-amp can be used to perform various mathematical operations such as addition, subtraction, multiplication along with calculus operations like differentiation and integration. Op-amps are used for a variety of applications such as AC and DC signal amplification, filters, oscillators, voltage regulators, comparators in most of the consumer and industrial devices. Today, op-amps are very popular building blocks in analogue electronic circuits.