Data comparison is needed in digital systems while performing arithmetic or logical operations. This comparison determines whether one number is greater than, equal, or less than the other number. A digital comparator is widely used in combinational system and is specially designed to compare the relative magnitudes of binary numbers.

These are also available in IC form with different bit comparing configurations such as 4-bit, 8-bit, etc. More than one comparator can also be connected in cascade arrangement to perform comparison of numbers of longer lengths.Whenever we want to compare the two binary numbers, first we have to compare the most significant bits.

If these MSBs are equal, then only we need to compare the next significant bits. But if the MSBs are not equal, then it would be clear that either A is greater than or less than B and the process of comparison ceases.

If the MSBs are equal, i.e., A1=B1 only then we need to compare the next significant bits A0 and B0 and decide whether the number is greater than, less than or equal. So, the comparator produces three outputs as L, E and G corresponds to less than, equal and greater than comparisons.

Digital comparators can be of two types

Comparators that have only one output terminal and produces the output either low or high are identity comparators.

Comparators with three output terminals and checks for three conditions i.e greater than or less than or equal to is magnitude comparator.

A magnitude digital comparator is a combinational circuit that compares two digital or binary numbers (consider A and B) and determines their relative magnitudes in order to find out whether one number is equal, less than or greater than the other digital number.

Three binary variables are used to indicate the outcome of the comparison as A>B, A<B, or A=B. The below figure shows the block diagram of a n-bit comparator which compares the two numbers of n-bit length and generates their relation between themselves. 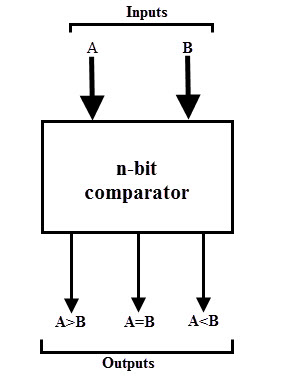 A comparator used to compare two bits, i.e., two numbers each of single bit is called a single bit comparator. It consists of two inputs for allowing two single bit numbers and three outputs to generate less than, equal and greater than comparison outputs.

The figure below shows the block diagram of a single bit magnitude comparator. This comparator compares the two bits and produces one of the 3 outputs as L (A<B), E (A=B) and G (A>B). 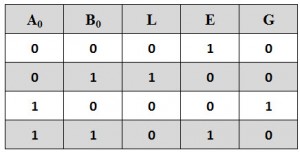 A 2-bit comparator compares two binary numbers, each of two bits and produces their relation such as one number is equal or greater than or less than the other. The figure below shows the block diagram of a two-bit comparator which has four inputs and three outputs.

The truth table of this comparator is shown below which depicting various input and output states. 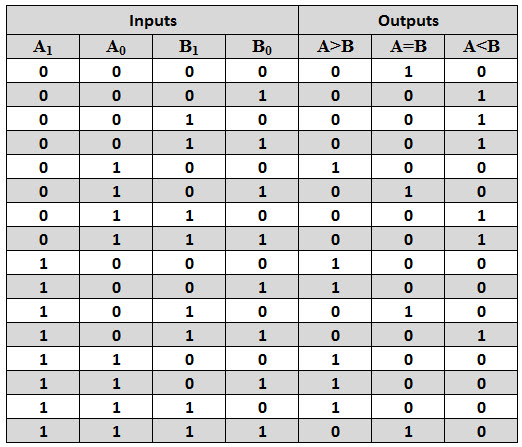 The k-map simplification for the above truth table is as follows.

From the above k-map simplification, each output can be expressed as

By using above obtained Boolean equation for each output, the logic diagram can be implemented by using four NOT gates, seven AND gates, two OR gates and two Ex-NOR gates.

The figure below shows the logic diagram of a 2-bit comparator using basic logic gates. It is also possible to construct this comparator by cascading of two 1-bit comparators. 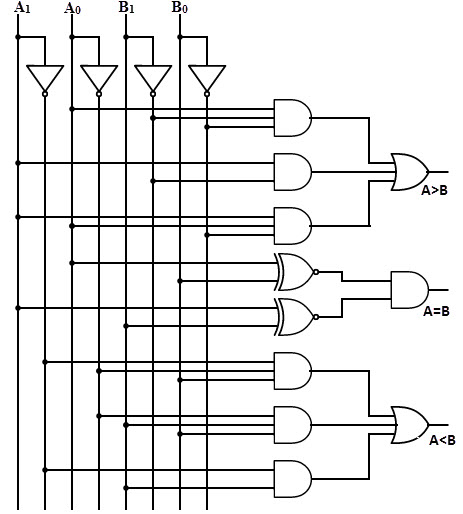 It compares each of these bits in one number with bits in that of other number and produces one of the following outputs as A = B, A < B and A>B. The output logic statements of this converter are

From the above statements, the output A > B logic expression can be written as

The equal output is produced when all the individual bits of one number are exactly coincides with corresponding bits of another number. Then the logical expression for A=B output can be written as

From the above output Boolean expressions, the logic circuit for this comparator can be implemented by using logic gates as given below. In this the four outputs from Ex-NOR gates are applied to AND gate to give the binary variable E or A = B. The other two outputs are also use Ex-NOR outputs to generate the Boolean functions as shown figure. 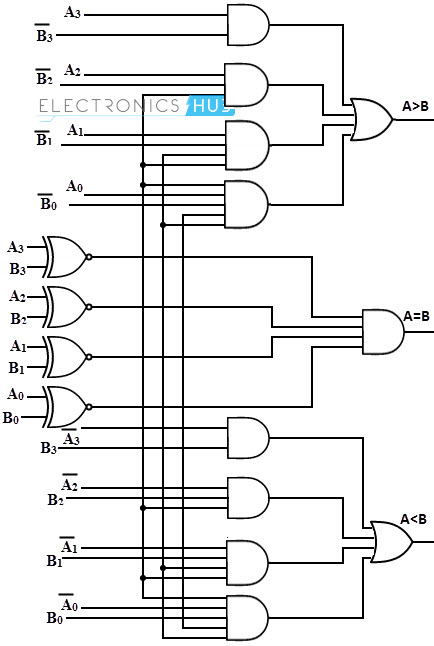 The 4-bit comparator is mostly available in IC form and common type of this IC is 7485. This IC can be used to compare two 4-bit binary words by grounding I (A>B), I (A<B) and I (A=B) connector inputs to Vcc terminal. The figure below shows the pin diagram of IC7485 comparator. 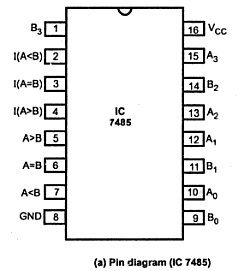