In this tutorial, we will learn about one of the basic concepts that is essential for beginners in Electronics i.e. an LED Resistor Calculator. You will see why choosing an appropriate Resistor for LED is crucial for its operation and also the factors that are to be considered in selecting a particular resistor so that the LED doesn’t burn.

If you just began with electronics like some DIY stuff or Arduino, then probably the first project or circuit you might have built would be to blink an LED.

The good thing about Arduino is that it has an on-board LED connected to Digital IO Pin 13 and all you need to do is to just plug-in the Arduino UNO board to a computer and upload the Blink Sketch. The LED starts blinking.

But if you stop there, then you will not understand the “hardware” part of the project. If you take a look at the schematic of Arduino Uno Rev 3, then you will notice that the LED is not directly connected to the IO pin of the ATmega328P Microcontroller (Port B Pin 5 to be exact). But rather it is connected through a 1 KΩ Resistor in series with it.

This resistor is the interesting thing for the further discussion of this tutorial. But for some basic information on Light Emitting Diodes (LEDs), you can refer to the following post.

What is the need for LED Resistor?

If you read the LED tutorial mentioned above, then you might have grabbed that any LED has two major characteristics that define the operation of an LED. They are the Forward Current and the Forward Voltage.

All LEDs, irrespective of the shape, size or form factor, have a pre-defined amount of operating current that they can allow. This current is usually defined in datasheets as Continuous Forward Current.

So, it is absolutely essential that you control the amount of current flowing through an LED and the simplest method to limit the current is to use a Series Resistor.

The other important characteristic of an LED is its Forward Voltage. We will see its impact while understanding the LED Resistor Calculator Equation and also in the selection of the Series Resistor.

Let us now proceed with important aspect of the tutorial i.e. the equation for the LED Resistor Calculator. For the sake of simplicity, let us consider a simple circuit consisting of a single LED, a single Series Resistor and a power supply.

The following image shows a simple LED circuit made up of an LED, a resistor RS and a power supply VS. 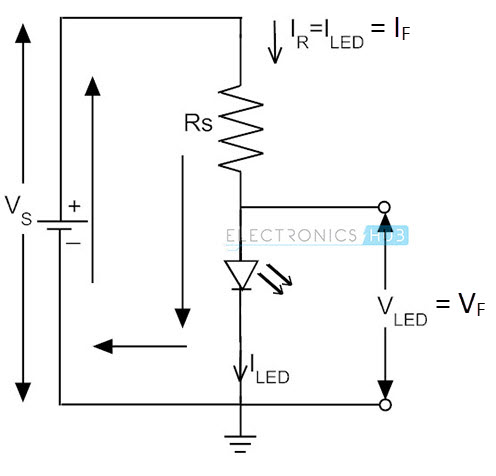 Using simple Circuit Theory, you get the following equation:

VS is the power supply voltage,

RS is the value of the series resistor,

IR is the current through the series resistor,

VLED is the forward voltage or voltage drop across the LED (usually represented as VF).

Since the Series Resistor RS and the LED are in series, the current flow through them will be the same and as per our previous discussions, this current should be the Forward Current of the LED (ILED or simply IF).

Thus, we can re-write the above equation as follows:

This is the LED Resistor Calculator Equation. The important thing to note here is that the value of the series resistor is dependent on both the Forward Current of the LED as well as the Forward Voltage of the LED. Hence, it is essential to keep an eye on both these value of an LED from its datasheet.

NOTE: The following values are specific to a manufacturer and cannot be generalized. For accurate values, you should definitely check out the datasheet provided by your manufacturer.

If there are two LEDs connected in series, then the equation to calculate the Series Resistor will be the following:

In fact, if there are ‘N’ number of similar LEDs connected in series, then the LED Resistor Calculator equation can be written as follows:

Let us now take a look at a simple example circuit and calculate the value of the series resistor for an LED to work properly without blowing up. 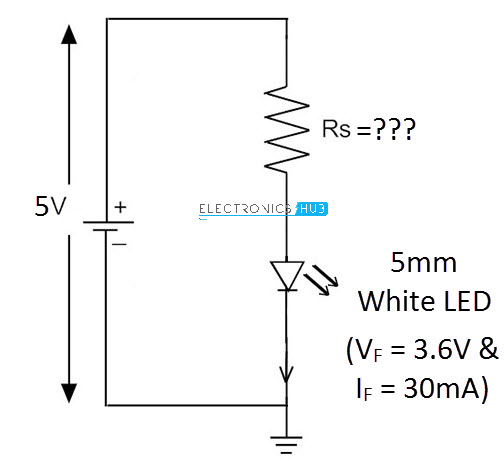 Forward Current IF = 30 mA and

Substituting these values in the above equation, we get the following:

The closest value is a 47 Ω Resistor. But if you want to be on the safe side, I would suggest you to use the next big value and, in this case, it would be a 56 Ω Resistor.

Power Dissipation of the Resistor

One important characteristic of the series resistor for an LED that is often neglected or ignored is the power dissipation of the Resistor.

If the voltage drop of the LED is VF, then the voltage drop across the Resistor is VS – VF. This means that in the process of limiting the current through the LED to the value of IF, the resistor has to dissipate the remaining power, which is (VS – V­F) * IF. If the power rating of the resistor doesn’t satisfy this value, then the resistor will burn and you will see the magic smoke.

If we consider the above example of 5V power supply with a 5mm White LED, we have calculated the value of the Resistor to be 47Ω. In this case, the actual power dissipated by the resistor is (5 V – 3.6 V) * 30 mA. This is equal to 42 mW. So, a ¼ W resistor would be sufficient.

This might seem a small number but this is just an example and it can get pretty hot while designing and building complex and high power LED circuits.