Some of the frequently used diode characteristics are given below.

Now, we will see a little bit more about these diode characteristics in brief.

The main reason for the flow of current is due to the generation or recombination of majority charge carriers in the structure of the PN junction diode.

The region of the quasi neutral N – type is the separation between the edge of the depletion region and the edge of the diode on the N – side. For assumption, this separation distance is infinity. There will be no variation in the concentration of charge carriers as we move towards the boundaries of the diode. The electric field will not present in the quasi neutral region.

The diode current in the forward bias is due to the recombination of majority charge carriers. The charge carrier recombination takes place either in the P – type or N – type quasi neutral regions, in the depletion region or at the ohmic contacts i.e., at the contact of metal and semiconductor.

The quasi Fermi level energies of the electrons and holes within the depletion region and that of in the N – type and P – type quasi neutral regions are assumed to be approximately equal in obtaining an analytical solution.

When there is no external voltage applied, thermal equilibrium state is reached at the above stated equations. The separation between the Fermi levels increases with the external applied voltage. This external voltage is multiplied by the charge of the electron.

The excess charge carriers present in either of the quasi region recombines straight away when they reach the metal – semiconductor contact. The process of recombination takes place rapidly at the ohmic contact and it further increases by the presence of metal. Therefore valid boundary conditions can be stated as follows,

Here A, B, C and D are the constant values to be determined. If the boundary conditions are applied to the above hyperbolic equations, then we will have

Static resistance or DC resistance of a PN junction diode defines the diode’s resistive nature when a DC source is connected to it. If an external DC voltage is given to the circuit in which the semiconductor diode is a part of it, results in a Q-point or operating point on the PN junction diode characteristic curve that does not alter with time.

The static resistance at the knee of the curve and below of it will be much greater than the resistance values of the vertical rise section of the characteristic curve. Minimum is the current passing through a diode maximum is the level of DC resistance. 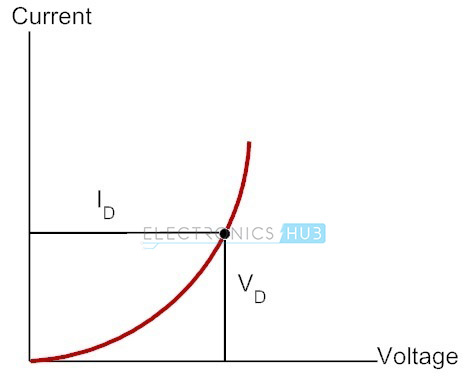 Dynamic resistance is derived from Shockley’s Diode Equation. It defines the diode resistive nature when an AC source which depends on the DC polarisation of the PN junction diode is connected to it.

If an external sinusoidal signal is given to the circuit consisting of a diode, the altering input will shift the instantaneous Q – point slightly from the current position in the characteristics and therefore it defines a definite change in voltage and current.

When no external alternating signal is applied, the operating point will be the Q – point (or quiescent point) which is determined by the applied DC signal levels. The AC resistance of the diode is increased by lowering the Q-point of operation. In short, it is equivalent to slope of voltage – current of the PN diode. 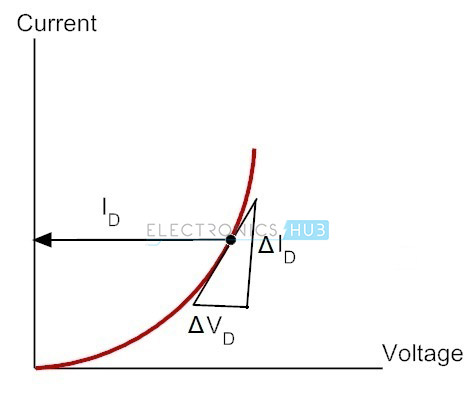 If the input signal is sufficient enough to produce a large swing, then the resistance related to the diode for this region is called as AC average resistance. It is determined by the straight line that is drawn linking the intersection of the minimum and maximum values of external input voltage. 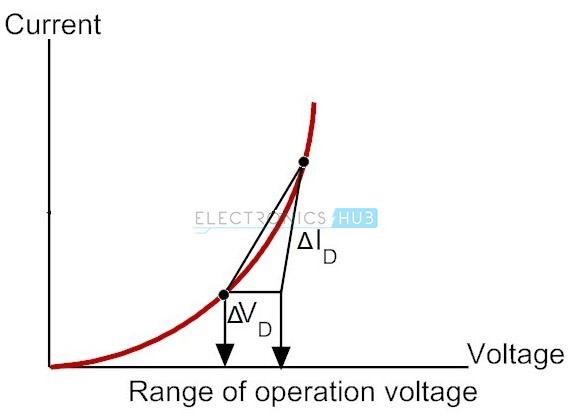 The increased levels in current will result in reduced levels of associated resistance and also the time constant, that is important in very high-speed applications. The diffusion capacitance value is much greater than the value of transition capacitance and it is directly proportional to the value of direct current.

The PN junction diode acts like a perfect conductor in forward biased configuration and acts like a perfect insulator in reverse biased configuration. During the switching time from forward to reverse biased condition the current flow switches and remains constant at the same level. This time duration over which the current reverses and maintains constant level is called as storage time (Ts).

The time for the current to decrease to a reverse leakage current value after it remains at a constant level is called as a transition time. It is denoted as  the transition time value is determined by the geometry of the PN junction and concentration of doping levels of the P – type and N – type materials.

The sum of the storage time and transition time is termed as reverse recovery time. It is the time taken by the diode to raise the applied current signal to 10% of the constant state value from the reverse leakage current. The reverse recovery time value for PN junction diode is usually of the order of microseconds.

Its value for a widely used small signal diode rectifier 1N4148 is usually 4 ns and for general purpose rectifier diode it is 2 μs. The fast switching speeds can be achieved by the high value of reverse leakage currents and high forward voltage drops. It is denoted by Trr.

A brief view on different Diode Characteristics is presented here.

NEXT – TYPES OF DIODES