In the previous tutorials, we have seen the basics of Electric Charge and Coulomb’s Law. In this tutorial, we will continue exploring the concepts of electrostatics by understanding Electric Field.

An interesting question may arise as how the electric charge q1 “knows” the presence of charge q2 when separated by a distance and do not touch each other? How q2 can push (or pull) q1 by exerting the force?

The answer to all these questions is Electric Field. Similar to Gravity, the electric field is simply the presence of the charge which represents the “region of its influence”.

What is Electric Field? 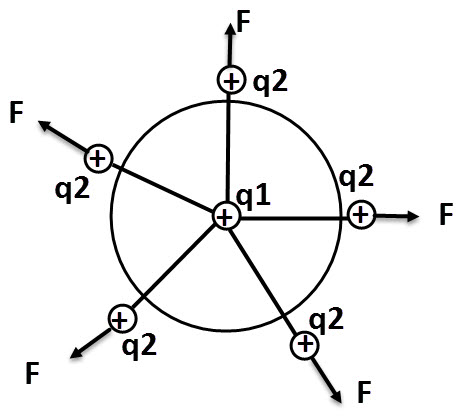 According to Coulomb’s Law, the force experienced by charge q2 due to charge q1 is given below:

If we write the above equation as force per unit charge, then we get the following equation:

This is Electric Field (or electric field intensity) and is equal to force exerted per unit charge. It is a vector quantity denoted by . The direction of this vector is line joining q1 and q2.

The electric field around a charged object is represented using imaginary lines of forces called Electric Field Lines. For a positive charge, these lines emanate radially outward from the charge. In contrast, for a negative charge, the lines are directed inwards, towards the charge.

Consider a point charge whose electric field is E. Now, if we place a charge q (also called as the test charge) at a distance r from the point charge, it experiences an electric force as per the following equation.

Using Coulomb’s Law, we can calculate the force exerted by the point charge Q on a test charge q as follows:

Using the above equation in the earlier equation we get:

Further, we can calculate E using the above equation as follows:

As per the above discussion, electric field is defined as electric force per unit charge. Hence,

From Coulomb’s Law, the electric force acting on the test charge is given by the following equation:

The following image shows a setup of two charges that are equal in magnitude and are opposite in sign. This configuration is often called as Electric Dipole. 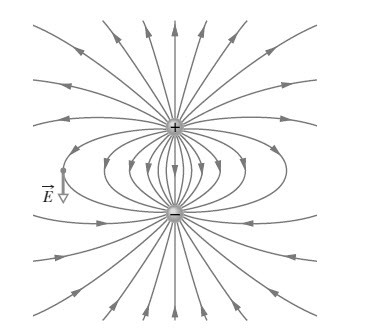 Let us now find the E due to an electric dipole. The following image shows two charged particles of same magnitude q but of opposite sign. They are separated by a distance d. the axis through the charged particles is called Dipole Axis and we will find the E at point P, which is at a distance z from the mid-point of the dipole axis.

Using superposition principle for electric fields, the magnitude of E at P is given by the following equation: 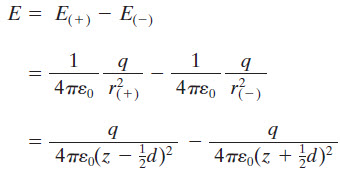 Using a little algebra in the above equation and also assuming that distance z is much greater than d (z >> d), we get the following equation.

The charge distribution discussed so far are considered to b discrete. But some charge distributions consist of many tightly placed point charges (in the number of millions or billions) that are spread along a line or over a surface or within a volume.

Such distributions are considered to be continuous and, in this case, it is easy to express the charge of the object as charge density instead of total charge. In case of a line of charges, we use the linear charge density, represented by λ (units C / m).

Now consider an insulator ring of radius R. Around its circumference, there is uniform positive charge density λ. We will now calculate E at a point P which is at a distance z from the plane of the ring along its central axis.

Since the charge is differential, the E at point P is also differential and is given by the following equation.

Using a little trigonometry, we can write the above equation as follows:

Now, after adding the parallel component, integrating for the entire circumference and substituting for λ, we get E as:

Consider an insulated circular disk of radius R with a positive surface charge density of σ (charge per unit area). We will now calculate E at a point P, which is at a distance z from the disk along its central axis.

Similar to the previous line of charge calculation, we will divide the disk into concentric rings and calculate the E by integrating. Let one of concentric rings have a radius of r and radial width of dr.

From the previous ring of charge calculation, dE due to flat ring is given by

Integrating this over the surface of the disk and rearranging, we get E of a charged disk as follows: