In this tutorial, we will learn about PN Junction Diodes and in particular the characteristics and working of PN Junction Diode. This understanding will lay a better foundation for exploring further into different aspects of semiconductor electronics. 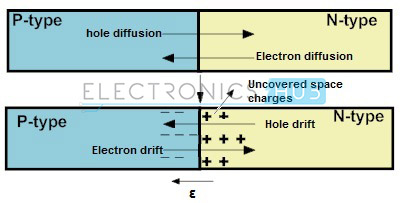 The diode can be observed as a straightforward bipolar semiconductor device. The characteristics of diode look to be a graph of current that a diode produces when the voltage applied to it. A perfect diode can be absolutely distinguished by its current and voltage curve.

It permits the current to flow solely in forward direction and effectively blocks the current in the reverse direction. It is vital to recognize that the semiconductor is entirely a single-crystal material, made from two separate blocks of semiconductor opposite kind.

The boundary splitting the n and p region is referred to as the metaphysical junction. The concentration of doping is same all over in every block and there will be an abrupt modification in doping at the junction. When the two blocks are placed nearer to each other, the electrons and holes diffuse towards the region of lower concentration from the region of higher concentration.

The net positively and negatively charged ions within the N and P regions induce an electric field in the space near to the metaphysical junction. Merging these two regions wherever the electric field is small and wherever the free carrier density is equivalent to the net doping density can be named as the space charge region.

It can also be referred as a quasi neutral region. Fundamentally, all electrons and holes are swept out of the free space charge region by the electric field. The tapered region in which depletion of free mobile charge carriers takes place is called as Depletion Region.

Depletion region contains preset positive ions on the N-side and preset negative ions on the P-side. The width of the depletion layer is inversely proportional to the concentration of dopants present in each region.

The electric field within the depletion region creates an opposing force that opposes the electrons and holes from diffusing attributable to the impact of charged ions within the depletion region. This opposing force can be often cited as potential barrier voltage. The typical value of potential barrier for silicon is 0.72V and for germanium is 0.3V.

When the electric field and barrier potential are balanced with one another, then the state of equilibrium is reached that result in potential difference Vo connecting the two sides of the depletion layer. The net contact potential difference depends on the type of material and it is high for n-type than the p-type.

In the state of thermal equilibrium, barrier potential provides low potential energy for the electrons on N-side than P-side. Energy bands bend in the free space charge region, since conduction and valence band positions with respect to the Fermi energy levels changes between P and N regions.

The built-in potential barrier can also be estimated as the distinction between the intrinsic Fermi energy levels in P and N regions. 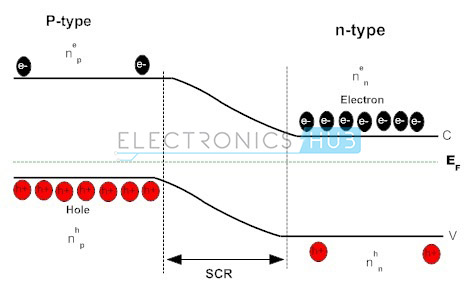 PN junction diode is a diode which can be used as a rectifier, logic gate, voltage stabiliser, switching device, voltage dependent capacitor and in optoelectronics as a photodiode, light-emitting diode (LED), laser diode, photo detector, or solar cell in electronics. 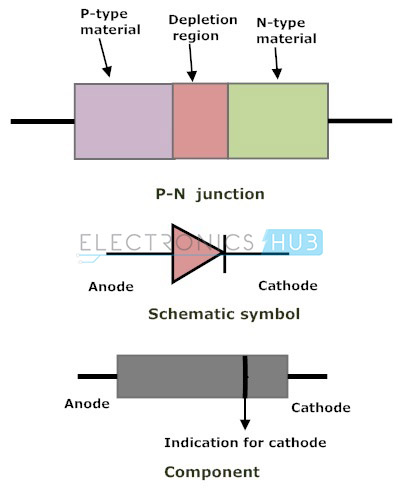 If an external potential is applied to the terminals of PN junction, it will alter the potential between the P and N-regions. This potential difference can alter the flow of majority carriers, so that the PN junction can be used as an opportunity for the diffusion of electrons and holes.

PN Junction Diode When No External Voltage is Applied

In zero bias or thermal equilibrium state junction potential provides higher potential energy to the holes on the P-side than the N-side. If the terminals of junction diode are shorted, few majority charge carriers (holes) in the P side with sufficient energy to surmount the potential barrier travel across the depletion region.

Therefore, with the help of holes, current starts to flow in the diode and it is referred to as forward current. In the similar manner, holes in the N side move across the depletion region in reverse direction and the current generated in this fashion is referred to as reverse current.

A net zero current flows in the circuit and the junction is said to be in dynamic equilibrium. By increasing the temperature of semiconductors, minority charge carriers have been continuously generated and thereby leakage current starts to rise. In general no conduction of electric current takes place because no external source is connected to the PN junction. 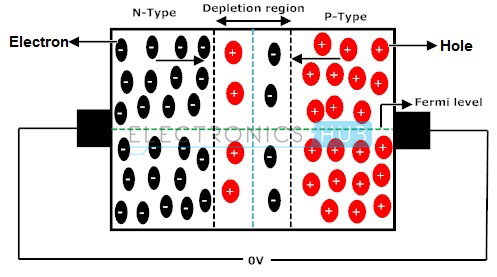 So an electric field is induced in a direction converse to that of the incorporated field. The presence of two different Fermi levels in the depletion layer represents a state of quasi-equilibrium. The amount of charge Q stored in the diode is proportional to the current I flowing in the diode.

With the increase in forward bias greater than the built in potential, at a particular value the depletion region becomes very much thinner so that a large number of majority charge carriers can cross the PN junction and conducts an electric current. The current flowing up to built in potential is called as ZERO current or KNEE current.

With the increase in applied external forward bias, the width of the depletion layer becomes thin and forward current in a PN junction diode starts to increase abruptly after the KNEE point of forward I-V characteristic curve.

The net result of applying forward bias is to reduce the height of the potential barrier by an amount of eV. The majority carrier current in the PN junction diode increases by an exponential factor of eV/kT. As result the total amount of current becomes I = Is * exp(eV/kT), where Is is constant.

Applying forward bias to the PN junction diode causes a low impedance path for the junction diode, allows for conducting a large amount of current known as infinite current. This large amount current starts to flow above the KNEE point in the forward characteristic with the application of a small amount of external potential.

The potential difference across the junction or at the two N and P regions is maintained constant by the action of depletion layer. The maximum amount of current to be conducted is kept limited by the load resistor, because when the diode conducts more current than the usual specifications of the diode, the excess current results in the dissipation of heat and also leads to severe damage of the device. 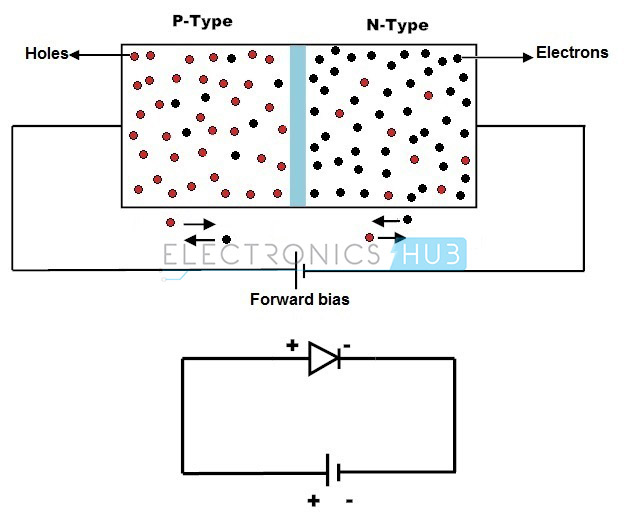 The Fermi level on N side is lower than the Fermi level on P side. Positive terminal attracts the electrons away from the junction in N side and negative terminal attracts the holes away from the junction in P side. As a result of it, the width of the potential barrier increases that impedes the flow of majority carriers in N side and P side.

As the reverse bias potential to the PN junction diode increases ultimately leads to PN junction reverse voltage breakdown and the diode current is controlled by external circuit. Reverse breakdown depends on the doping levels of the P and N regions. 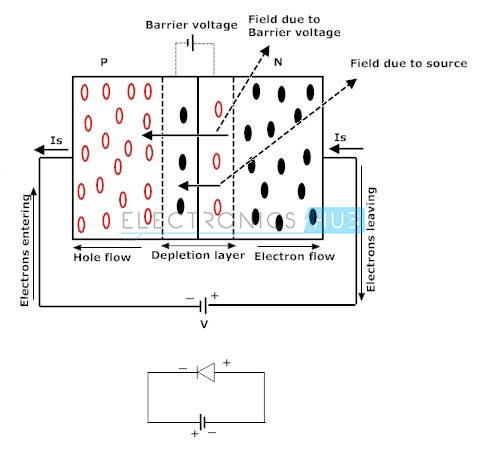 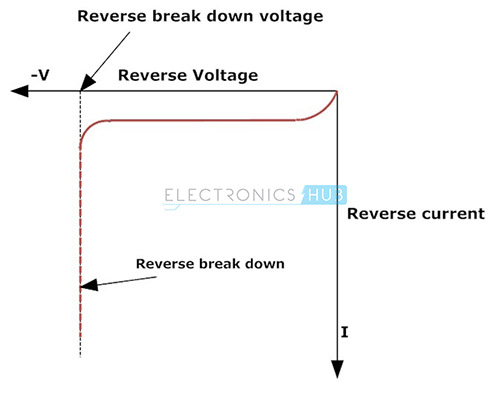 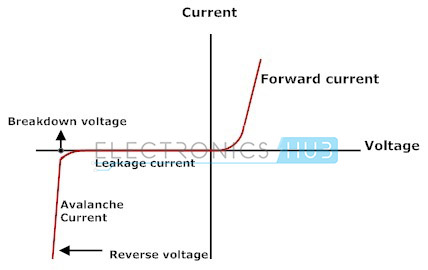 In the current–voltage characteristics of junction diode, from the first quadrant in the figure current in the forward bias is incredibly low if the input voltage applied to the diode is lower than the threshold voltage (Vr). The threshold voltage is additionally referred to as cut-in voltage.

Once the forward bias input voltage surpasses the cut-in voltage (0.3 V for germanium diode, 0.6-0.7 V for silicon diode), the current spectacularly increases, as a result the diode functions as short-circuit. 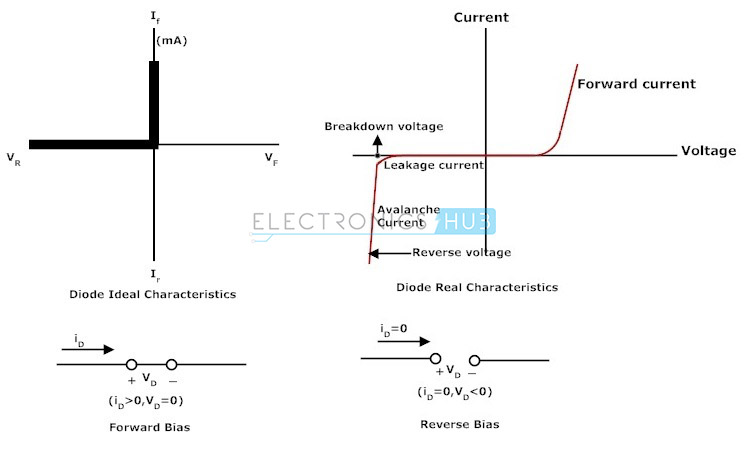