You are here: Home / Thyristors / PNPN Diode or Shockley Diode

In this tutorial, we will learn about Shockley Diode. Even though it is not available commercially (production stopped in 1950’s) and it is not particularly useful, the model technique of Shockley diode is very useful in creating other types of thyristors like SCR, DIAC and TRIAC etc.

It is the first member of thyristor family devices and it is named after the inventor William Bradford Shockley. Once we understand this basic operation of this diode, we will easily understand the next concepts covered in thyristors. Let us know about the Shockley diode working and applications.

The Shockley diode or PNPN diode is a four layer (P-N-P-N), two terminals (namely anode and cathode) semiconductor switching device. It is also called as four layer diode. It functions like a normal diode without any trigger inputs, in reverse biased condition, no current flows through it and in forward biased condition current flows through it when the voltage across it is more than the break over voltage of it.

These diodes have only two states, either ON or OFF that’s why these are classified as a thyristors. The basic construction, two transistor analogy and symbol of the shockley diode are shown in below figure. 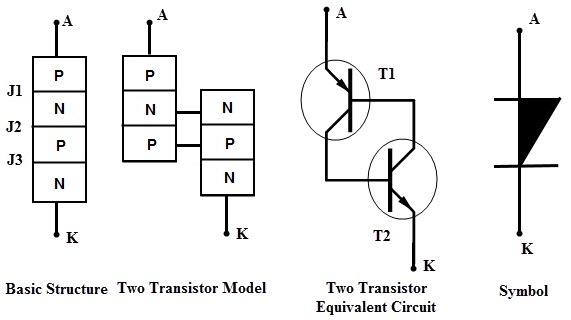 The construction of this diode is simple: it is constructed by joining the four layers to form PNPN junction. The equivalent circuit of this diode using two transistors is shown in above figure where in the collector of a transistor T1 is connected to the base of T2.

As discussed above, the these diodes consists of three junctions J1, J2 and J3. When the voltage is applied to the this diode in such a way that anode is made positive with respect to cathode, junctions J1 and J3 are forward biased and J2 is reverse biased.

Therefore, it acts like a short circuit and allows the current to flow until the current reaches to the holding current level of the diode. This forward current flow through the diode is depends on the voltage applied and the external load resistance. The below figure shows the VI characteristics of shockley diode for conducting and non conducting states where ON-state current flows only when the voltage is more than the break over voltage VBO. 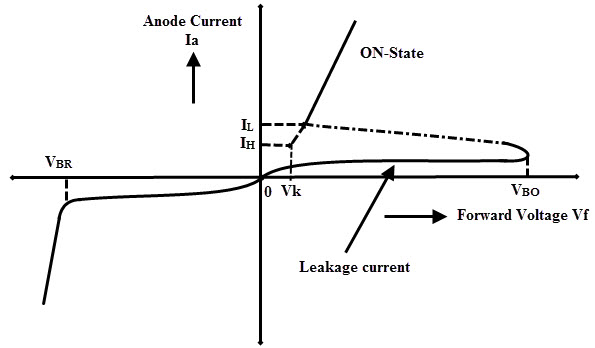 This reverse current produces the heat, further this could ruin the entire diode. Therefore, shockley diode should never be operated in reverse biased condition with a voltage equal to the reverse breakdown voltage.

Once the shockley diode is ON it acts like a closed switch offer a very low resistance to the current flow. To turn OFF the diode (or to act like an open switch), the applied voltage must be reduced to a value such that current flowing through the diode is less than the holding current IH of the diode. In this state, junction J2 comes from reverse breakdown state and restores its high resistance value.

Shockley diodes are used mainly for switching applications. The two main important applications of shockley diode as relaxation oscillator and trigger switch are discussed below.

The below figure shows the relaxation oscillator circuit using a shockley diode. In this the diode is connected across the capacitor power with a power supply battery. 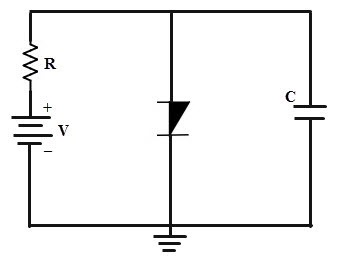 When the battery voltage is applied to the circuit, the capacitor charges through a resistance R. When the applied voltage or voltage across the capacitor is more than the break over voltage of shockley diode, it becomes turned ON and acts as a Switch. 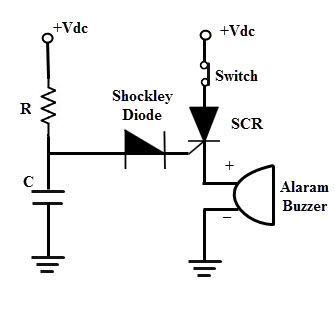 This conduction of shockley diode drives the SCR into turn ON state, then the buzzer gives an alarm. Once the SCR is turned ON it will remain in the latching or ON state until the power is removed or commutation techniques applied to SCR. So there is no effect of the gate or shockley diode circuit to make SCR OFF. However the triggering times of SCR is controlled by selecting proper values of capacitor and resistors.