The temperature value is analog. Hence, it is converted to digital value using an Analog-to-Digital Converter (ADC) and then it is displayed. This article describes the same, converting analog value to a digital value. 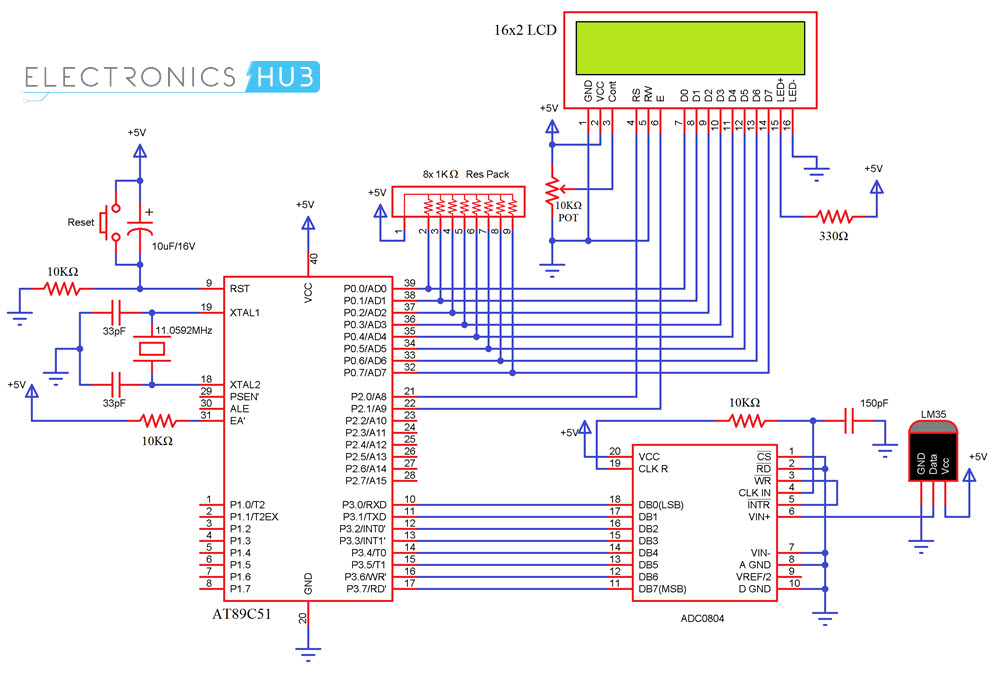 LM35 is connected to Analog In pin VIN+ (Pin 6) of ADC0804. Essential components like oscillator, reset etc. are not explained here.

After making all the connections and burning the code onto the 8051 Microcontroller, turn ON the power supply. The LM35 Temperature Sensor provides the Analog Temperature Data to ADC0804, which it converts into Digital Values and sends to 8051.

Upon receiving the digital values, the 8051 Microcontroller performs a small calculation and then displays the temperature on the LCD. 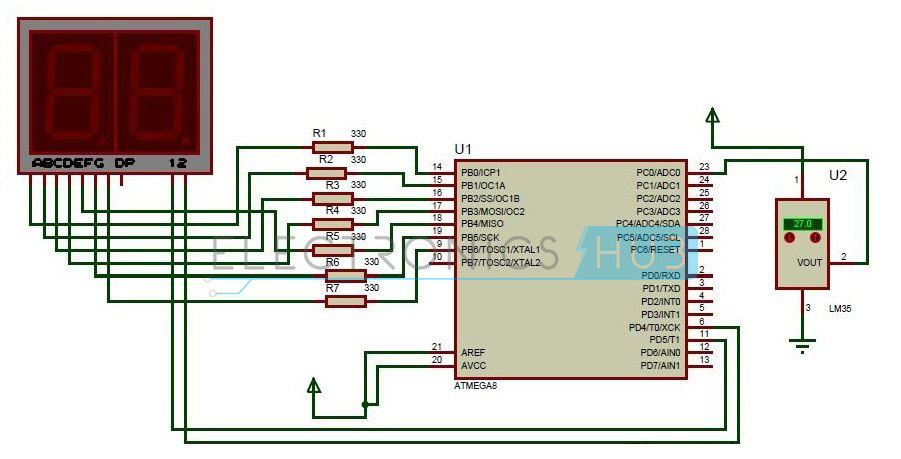 ATmega8 has six ADC channels at Port C. PC0-PC5 pins of Atmega8 act as ADC channels. This shows that one can interface six analog values. But only one conversion is done at a time depending on the priority of the input channels. The resolution of ADC is 10 bit. Remember that for conversion Vref and Avcc are externally connected as shown in circuit.

Generally, all the port pins of ATmega8 microcontroller act as normal input /output pins until their special functions are declared. ADC registers inside the controller have to be declared in order make Port C to act as ADC channel.

Lm35 temperature sensor has three terminals. Placing the flat surface towards you first pin is Vcc, Second pin is Output and the third pin is Ground. Output pin of temperature sensor is connected to the first ADC channel i.e. PC0 pin of microcontroller.

Initially power the circuit. The micro controller continuously checks for input at ADC channel. It converts the analog temperature to digital value and is displayed on the seven segments. Increment or decrement the temperature value by clicking on the arrow marks below the display in temperature sensor. Whenever there is a change, the ADC channel converts the input and displays on the seven segment. The temperature value displayed is twice the original value .This is because of variations in the step size. So, before displaying the value divide the value by 2 and subtract 1 from it to display accurate value.

Algorithm for Programming to Microcontroller

The following steps explain you to set the internal ADC registers of ATmega8 microcontroller and displaying value on seven segment display.

Ex: ADMUX=01000000.
If ADC0 is the channel selected and Avcc with external capacitor at Aref pin is selected