How to make an Arduino based Piano – Piezo Buzzer

In this fun DIY project, I will show you how to make an Arduino based Piano. It is a simple project made using Arduino UNO, few push buttons and a Piezo Buzzer. A special feature of this project is that Arduino will record the last played set of tones and repeat those tones like a one time record and repeat feature.

To keep things simple, I haven’t used any display (like 16×2 LCD Display). 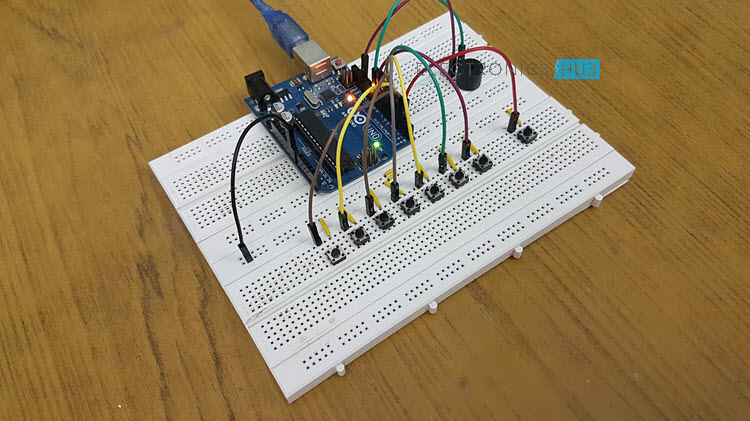 The Arduino based Piano project comes under the category of fun projects as you know, this project doesn’t have any real world applications (at least not directly) but can be used to understand certain features of Arduino (like its sound producing capabilities using the tone () function).

None the less, sounds and tones can provide a great audio feedback in our projects.

How to make Arduino based Piano?

Instead of asking how to make an Arduino based Piano, the correct question should be how to generate different tones using Arduino. We know that Arduino is capable of producing PWM signals.

Using tone () function, you can generate square waves of different frequencies but with fixed duty cycle (50%). Internally, the tone () function relies on the Timers of Arduino (or the ATmega328P Microcontroller, to be more accurate). 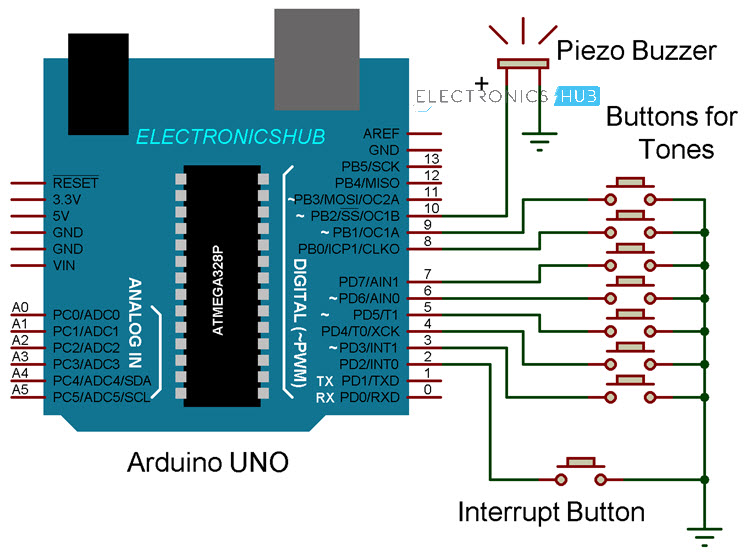 Now, connect 7 Push Buttons to digital I/O pins 3 through 9 of Arduino. These pins act as the tone input pins. I have used the INTERNAL PULL UP feature of Arduino and hence I haven’t connected any external pull-up resistors to these pins.

I have used the on-board LED (LED connected to Pin 13) to indicate between regular tone play and recorded tone play. 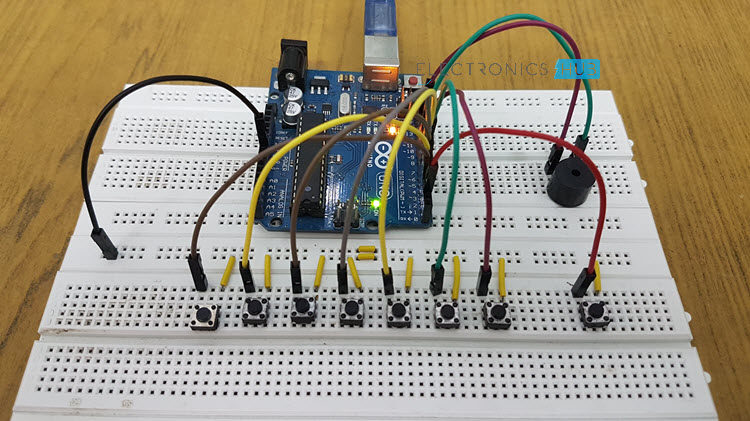 The code for the project How to make Arduino based Piano is given below.

Make the connections as per the circuit diagram and upload the code to Arduino. Once the power to the circuit is turned on, Arduino is ready to accept the input from the buttons.

Each button is associated with a PWM signal in the code. When a button is pushed, that particular PWM signal is generated through the Piezo Electric Buzzer.

Now for the record and repeat mode, play a few tones using different buttons. With each button pressed, Arduino starts recording i.e. makes note of the sequence of the buttons, its on time and off time.

Once you are done with the tone, you can push the Interrupt Button. As soon as the Arduino enters Interrupt Mode, all the previously pressed tones are played back through the Piezo Buzzer.

During normal tone playback i.e. when the buttons are being pressed, the LED on pin 13 stays ON. During repeat mode, it stays OFF.

An important point to understand here is that I did not use the tone() function of Arduino. You can try to generate sounds of different frequencies using that function.

A fun DIY Project called Arduino based Piano is implemented here. This project can be helpful in understanding the sound capabilities of Arduino. Although I haven’t used the tone () function, you can implement the same using that function for more accurate results.