What is a Switch? What are the Different Types of Switches?

In this tutorial, we will learn what is a switch, what are the different types of Switches, Mechanical Switches, Electronic Switches, their symbols and many more things about switches.

What is a Switch?

A Switch is a device which is designed to interrupt the current flow in a circuit. In simple words, a Switch can make or break an electrical circuit. Every electrical and electronics application uses at least one switch to perform ON and OFF operation of the device.

So, switches are a part of the control system and without it, control operation cannot be achieved. A switch can perform two functions, namely fully ON (by closing its contacts) or fully OFF (by opening its contacts).

Another important function of a Switch is to divert the flow of electric current in a circuit. Consider the following circuit. When the switch is in position A, the lamp 1 turns ON and while it is in position B, lamp 2 turns ON.

There are numerous applications of switch, found in wide variety of fields such as homes, automobiles, industrial, military, aerospace and so on. In home and office applications, we use simple rocker switches to turn ON and OFF appliances like lights, computers, fans etc. In some applications, multi way switching is employed (like building wiring), where two or more switches are connected to control an electrical load from more than one location, like a Two Way Switch, for example.

Characteristics of a Switch

Before proceeding further and looking at different types of switches, let us see some important points on the Characteristics of a Switch.

Basically, Switches can be of two types. They are:

Mechanical Switches are physical switches, which must be activated physically, by moving, pressing, releasing, or touching its contacts.

Electronic Switches, on the other hand, do not require any physical contact in order to control a circuit. These are activated by semiconductor action. 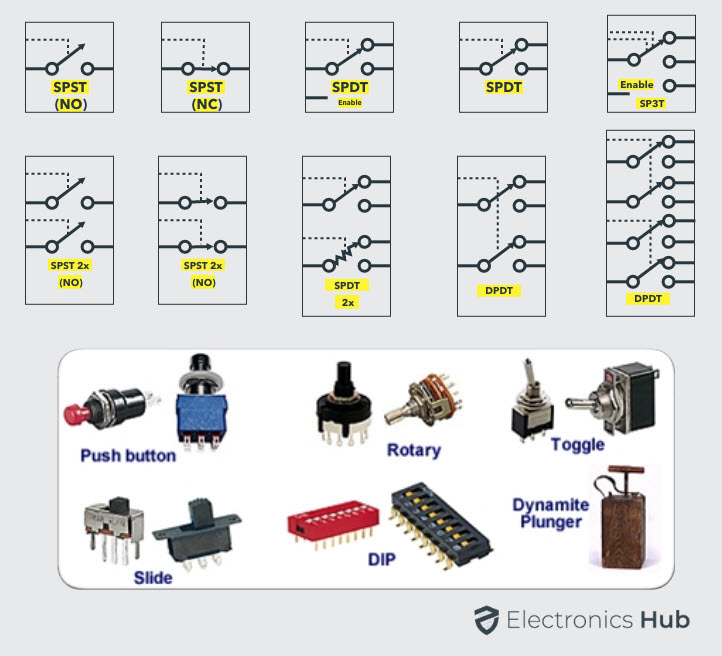 The number of throws represents the number of states to which current can pass through the switch. Most of the switches are designed to have either one or two throws, which are designated as single throw and double throw switches. 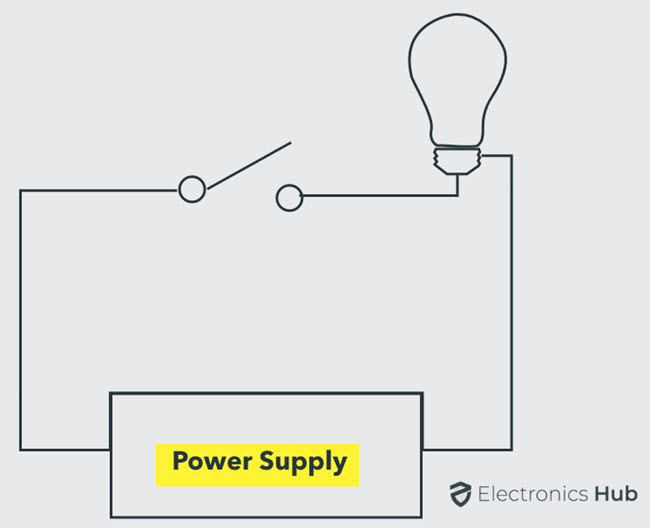 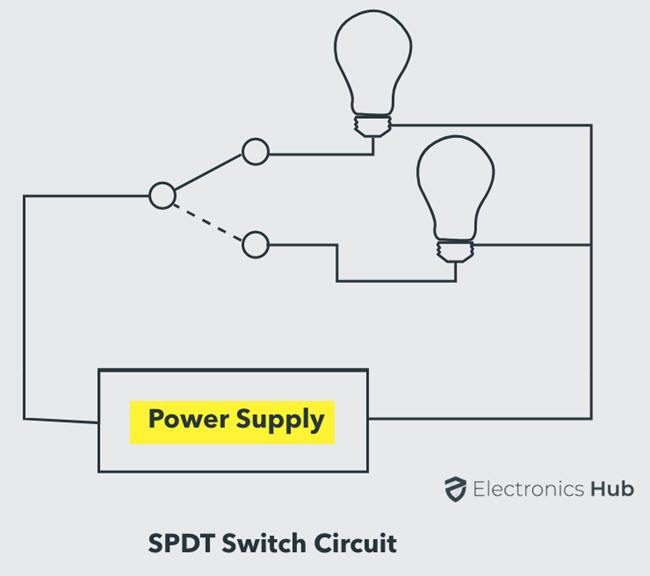 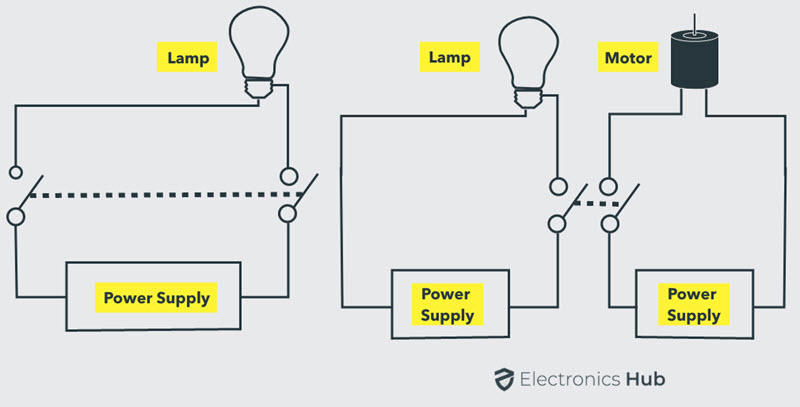 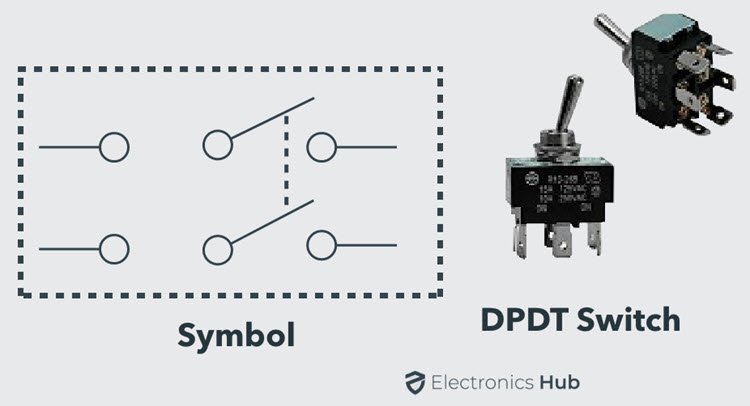 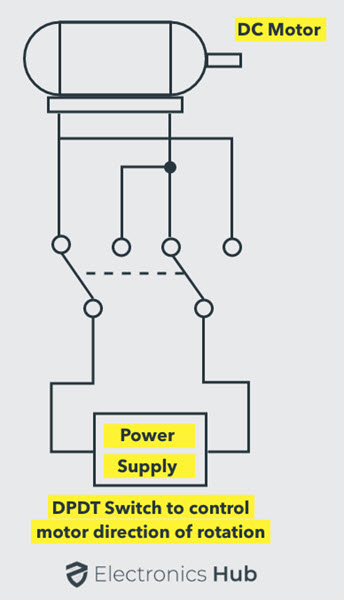 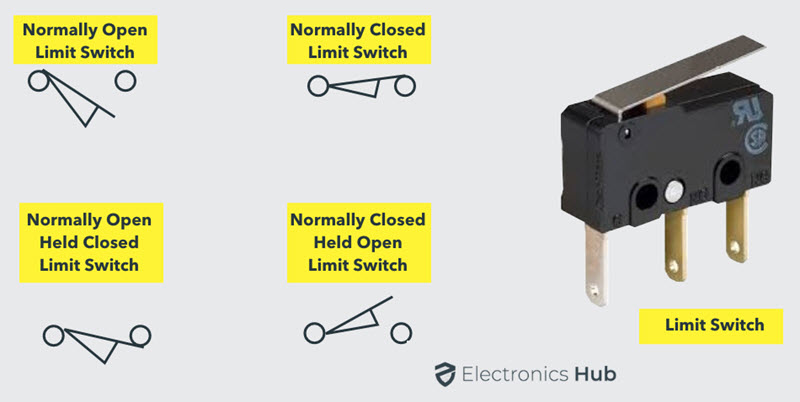 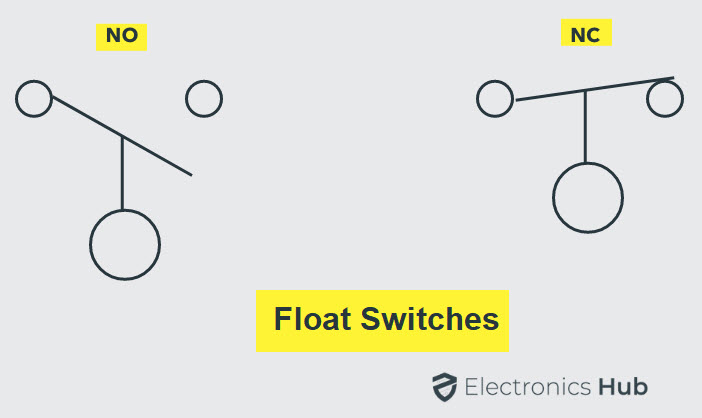 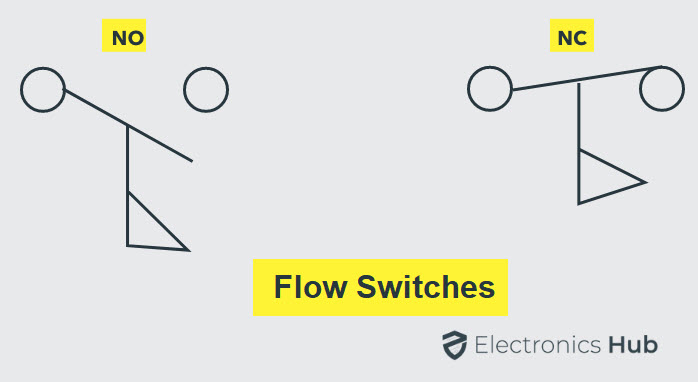 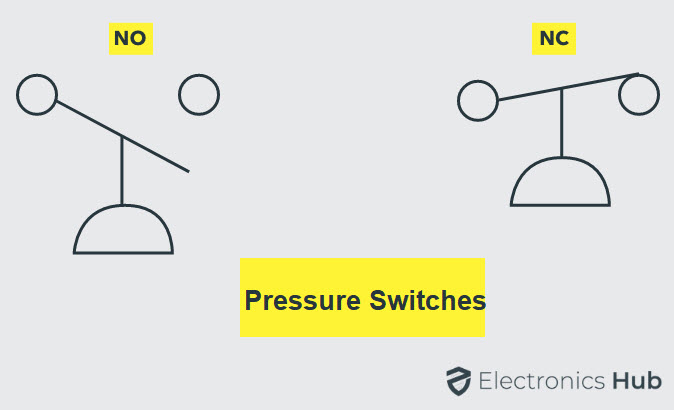 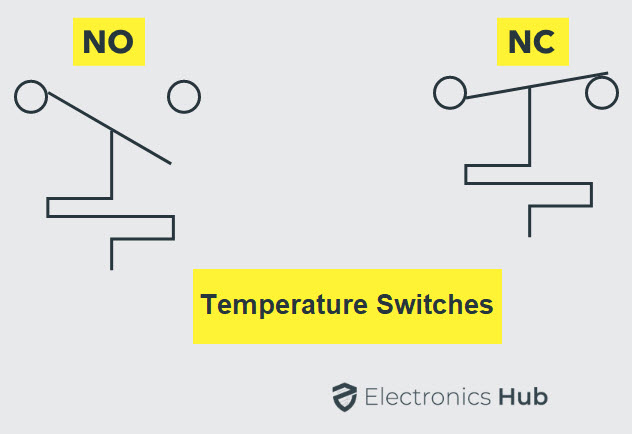 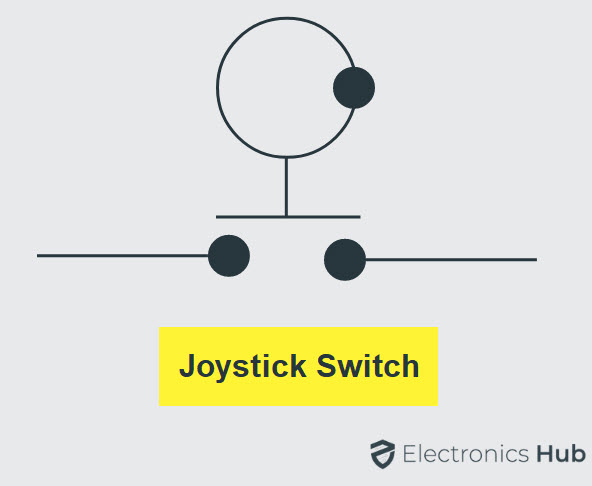 The electronic switches are generally called as Solid State switches because there are no physical moving parts and hence no physical contacts. Most of the appliances are controlled by semiconductor switches such as motor drives and HVAC equipment.

A transistor either allows the current to pass or it blocks the current as similar to working of normal switch.

In switching circuits, transistor operates in cut-off mode for OFF or current blocking condition and in saturation mode for ON condition. The active region of the transistor is not used for switching applications. 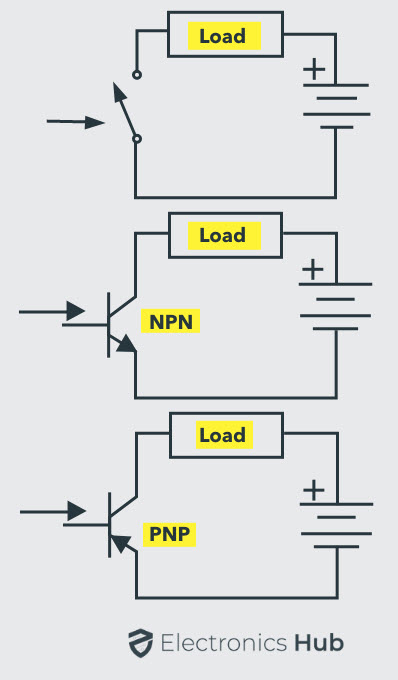 Both NPN and PNP transistors are operated or switched ON when a sufficient base current is supplied to it. When a small current flows though the base terminal supplied by a driving circuit (connected between the base and emitter), it causes the transistor to turn ON the collector-emitter path.

And it is turned OFF when the base current is removed and base voltage is reduced to a slight negative value. Even though it utilizes small base current, it is capable of carrying much higher currents through the collector- emitter path.

A diode can perform switching operations between its high and low state impedance states. Semiconductor materials like Silicon and Germanium are used for constructing the diodes.

Usually, Power Diodes are constructed using Silicon in order to operate the device at higher currents and higher junction temperatures. These are constructed by joining p and n type semiconductor materials together to form PN junction. It has two terminals namely anode and cathode. It is a voltage controlled device i.e., by controlling the input (gate to source) voltage, resistance between the drain and source is controlled, which further determines the ON and OFF state of the device. 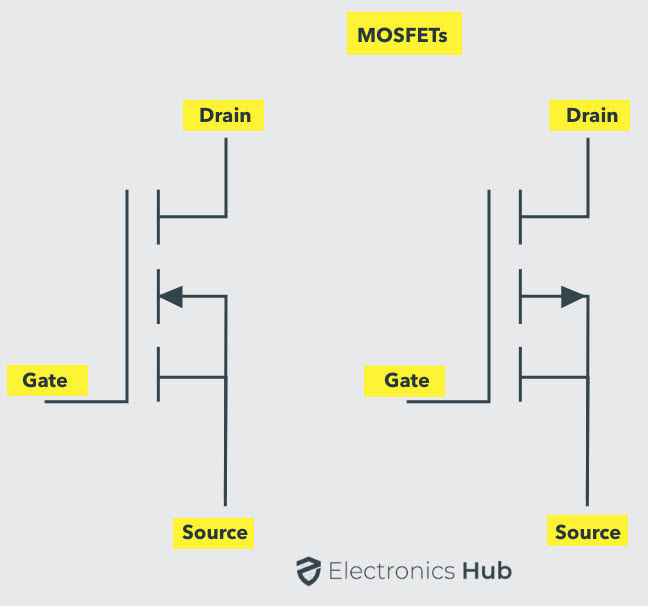 MOSFETs can be a P-Channel or N-Channel devices. The N-Channel MOSFET is tuned ON by applying a positive VGS with respect to the source (provided that VGS should be greater than threshold voltage).

IGBT (Insulated Gate Bipolar Transistor) combines the several advantages of bipolar junction power transistor and power MOSFET. Like a MOSFET, it is a voltage controlled device and has lower ON state voltage drop (less than that of MOSFET and closer to power transistor).

It is a three terminal semiconductor high speed switching device. These terminals are emitter, collector and gate. 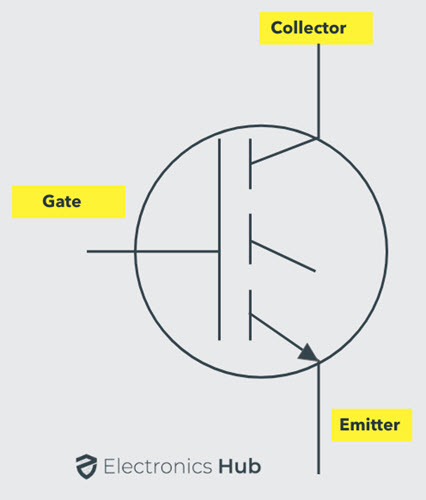 A Silicon Controlled Rectifier (SCR) is one of the most widely used high speed switching device for power control applications. It is a unidirectional device as a diode, consisting of three terminals, namely anode, cathode and gate.

An SCR is turned ON and OFF by controlling its gate input and biasing conditions of the anode and cathode terminals. SCR consists of four layers of alternate P and N layers such that boundaries of each layer forms junctions J1, J2 and J3. 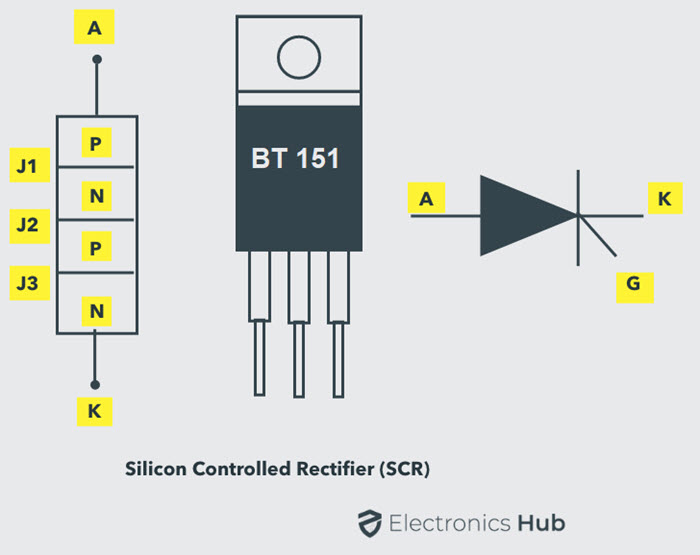 Triac (or TRIode AC) switch is a bidirectional switching device, which is an equivalent circuit of two back to back SCRs connection with one gate terminal.

Its capability to control AC power in both positive and negative peaks of the voltage waveform often makes these devices to be used in motor speed controllers, light dimmers, pressure control systems, motor drives and other AC control equipment. 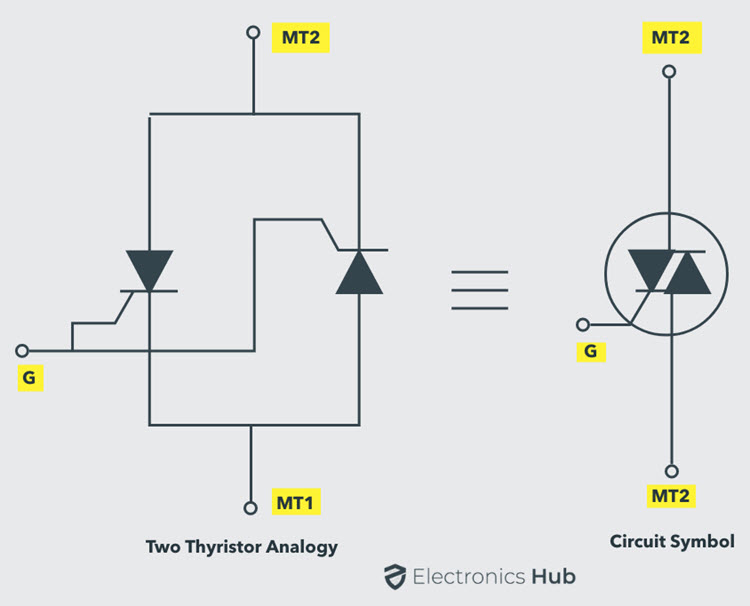 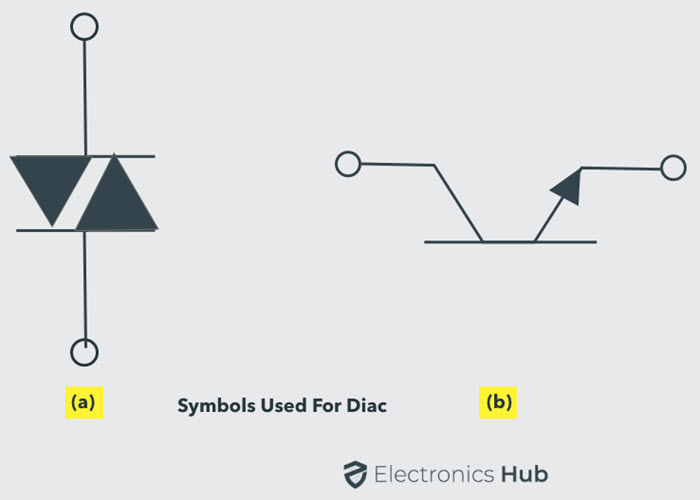 A GTO (Gate Turn off Thyristor) is a bipolar semiconductor switching device. It has three terminals: an anode, a cathode and a gate. As the name implies, this switching device is capable to turn OFF through gate terminal.

A GTO is turned ON by applying a small positive gate current, which triggers the conduction mode. It can be turned OFF by a negative pulse to the gate. GTO symbol consists of double arrows on the gate terminal, which represents the bidirectional flow of current through gate terminal. 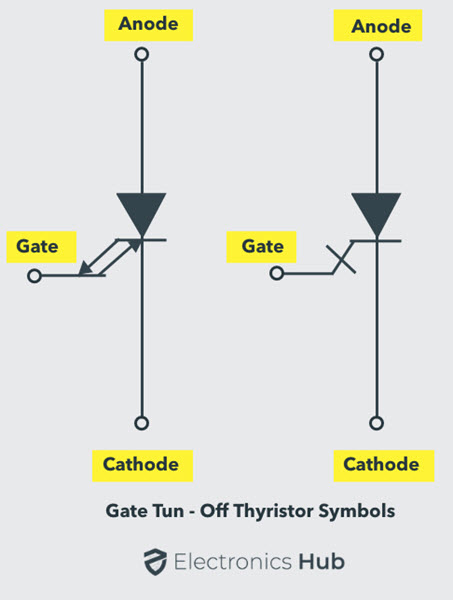 A simple tutorial on Switches, Different Types of Switches, Characteristics of a Switch, Mechanical Switches, Electronic Switches, circuit symbols of all the switches and also example circuits (or connections) for important switches.