What is a Laser Diode? Its Working, Construction, Different Types and Uses

What is a Laser Diode?

A Laser Diode is a semiconductor device similar to a light-emitting diode (LED). It uses p-n junction to emit coherent light in which all the waves are at the same frequency and phase. This coherent light is produced by the laser diode using a process termed as “Light Amplification by Stimulated Emission of Radiation”, which is abbreviated as LASER. And since a p-n junction is used to produce laser light, this device is named as a laser diode. Before we learn more about the working process of a laser diode, let’s look at how laser light is different from other types of light, and its advantages. 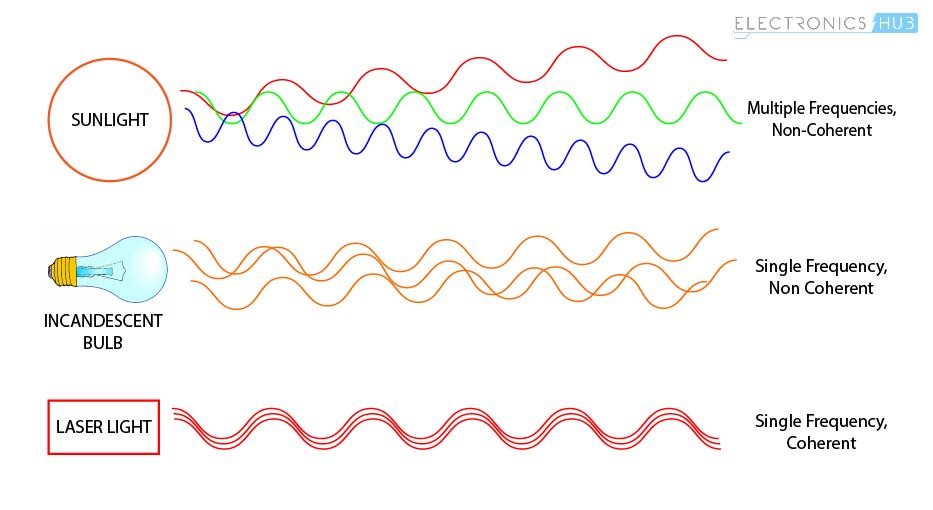 The light from sunlight or from most of the artificial light sources contains waves of multiple wavelengths and they are out of phase with each other. The light waves from monochromatic light sources like incandescent bulb also are not in phase with each other. In contrast to the previous light sources, laser diodes produce a narrow beam of laser light in which all the light waves have similar wavelengths and they travel together with their peaks lined up. This is why laser beams are very bright, and can be focused over a very tiny spot.

Of all the devices that produce laser light, laser diodes or semiconductor lasers are the most efficient and they come in smaller packages. So they are widely used in various devices like laser printers, barcode readers, security systems, Autonomous vehicles (LIDAR), Fiber optic communications etc.

How a Laser Diode Works?

The working of a laser diode takes place in three main steps:

The laser diode consists of a p-n junction where holes and electrons exist. (Here, a hole means the absence of an electron). When a certain voltage is applied at the p-n junction, the electrons absorb energy and they transition to a higher energy level. Holes are formed at the original position of the excited electron. The electrons stay in this excited state without recombining with holes for a very small duration of time, termed as “recombination time” or “upper-state lifetime”. The recombination time is about a nanosecond for most laser diodes. 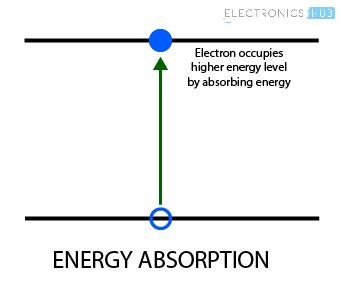 After the upper-state lifetime of excited electrons, they recombine with holes. As the electrons fall from higher energy level to a lower energy level, the difference in energy is converted into photons or electromagnetic radiation. This same process is used to produce light in LEDs. The energy of the emitted photon is given by the difference between the two energy levels. 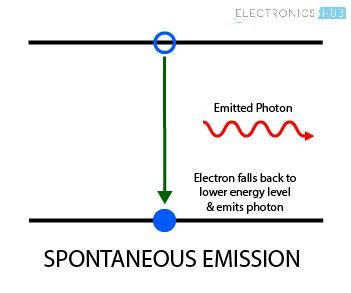 We need more coherent photons from the laser diode than the ones emitted through the process of spontaneous emission. A partially reflecting mirror is used on either side of the diode so that the photons released from spontaneous emission are trapped in the p-n junction until their concentration reaches a threshold value. These trapped photons stimulate the excited electrons to recombine with holes even before their recombination time. This results in the release of more photons that are in exact phase with the initial photons and so the output gets amplified. Once the photon concentration goes above a threshold, they escape from the partially reflecting mirrors, resulting in a bright monochromatic coherent light.

Construction of a Laser Diode

A simple semiconductor laser diode is made up of the following parts in order: 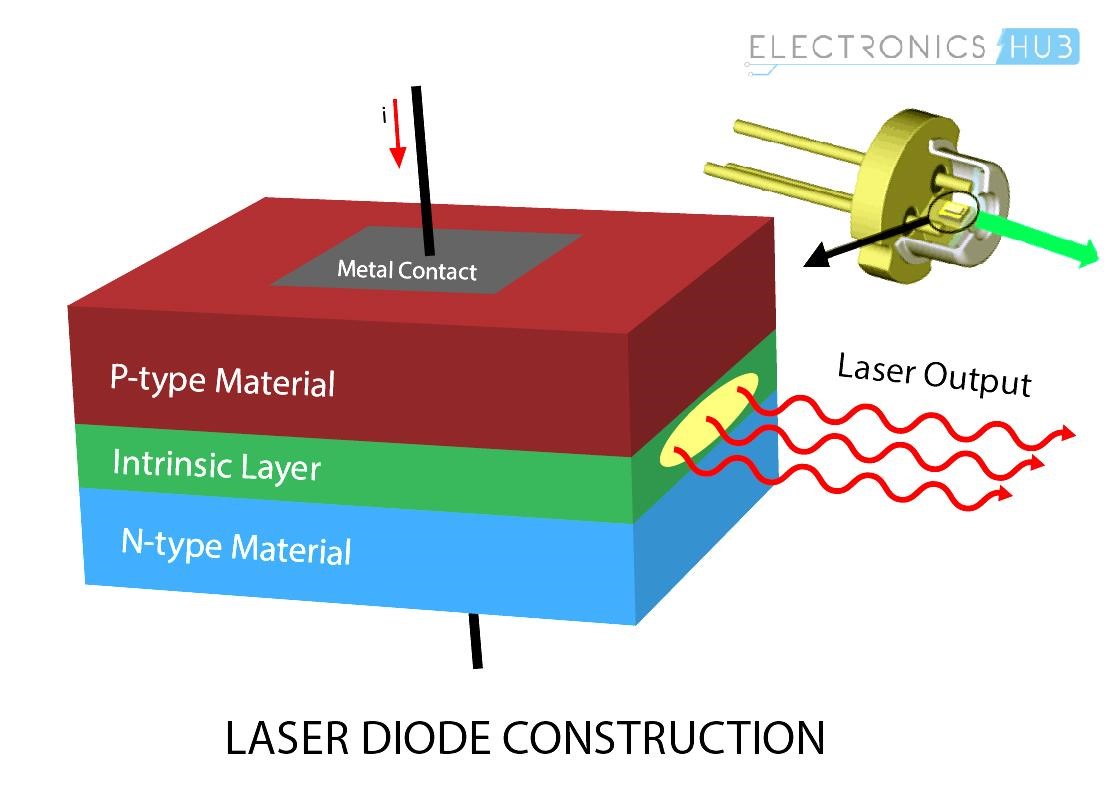 The input terminals are connected to a metal plates which are sandwiched to the n-type and p-type layers. This type of laser diode is also called as a “Homojunction Laser Diode”. The intrinsic region between the p-type and n-type material is used to increase the volume of active region, so that more number of holes and electrons can accumulate at the junction. This allows more number of electrons to recombine with holes at any instant of time, resulting in better output power. The laser light is emitted from the elliptical region. This beam from the laser diode can be further focused using an optical lens. This entire PIN diode (P-type, Intrinsic, N-Type) arrangement is enclosed normally in a metal casing.

The below diagram is a graphical plot between output optical power on y-axis and the current input to the laser diode on x-axis. 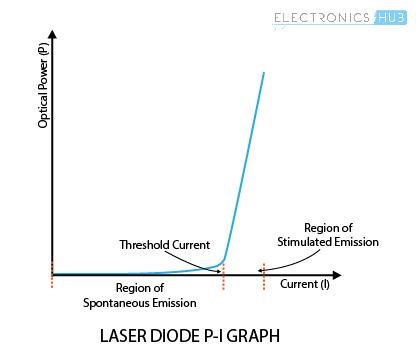 As we increase the current flow to the laser diode, the optical power of output light gradually increases up to a certain threshold. Until this point, most of the light emitted is due to spontaneous emission. Above this threshold current, the process of stimulated emission increases. This causes the power of output light to increase a lot even for smaller increases in input current. The output optical power also depends on temperature and it reduces with decrease in temperature.

How to make a Laser Diode Driver Circuit?

Laser diodes require complex drive circuitries that involve feedback loops by measuring output optical power, temperature, voltage and input current. But for controlling a laser diode used in applications where high accuracy is not required, a simple laser diode driver circuit can be constructed using LM317 voltage regulator IC. Below is the diagram. 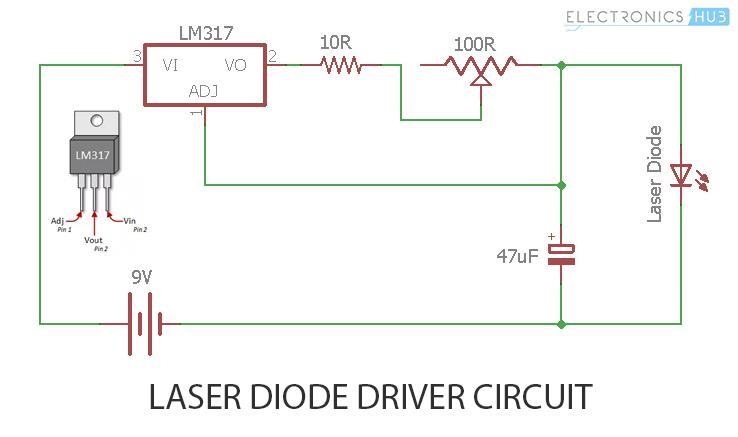 The LM317 is configured to function as a constant current source. The output current depends on the value of resistance between Vout and Vadj of LM317 (Pin2 & Pin1). So adjusting the 100R potentiometer will change the output current that flows into the laser diode. The 10R resistor is used to prevent large currents from flowing when the value of 100R potentiometer is at zero. The 47uF capacitor is used to absorb any battery voltage spikes.

Applications of a Laser Diode