LED (Light Emitting Diode) is a semiconductor light emitting diode. We know that diode allows the current in one direction and does not allow the reverse current which will affect the components in the circuit. LED also do the same function but will emit a small light when it allowed the current, which will give the sign or visual indication to the normal human that circuit is working. There are lots of applications using LEDs. They are mainly used for visual indication in any electronic devices, measuring and interacting with the process, displaying the pictures in TV or in any advertisement hoarding, etc.

Two LED blinking circuits are given below. First one is dancing bi-color LEDs (two different color LEDs) where the two color LED will run in sequence. In the second circuit, we will blink the LEDs in regular period of time.

Generally we use small voltage bulbs in the dancing bulbs. This circuit is mainly used in the occasions, decoration articles or in visual indication sign boards etc. In this project, we use bi-color LEDs for sequential running light.

Timer is used for setting the sequential flow rate for the bi-color LED panel. The CD4017 is a decade counter which provides the timing and will make the LED ON/OFF according to the time determined.


Main Components in this Circuit:

CD4017: CD4017 is a 16 pin decade counter and only 10 pins are used for output. The 4017 will get triggered by the clock pulses. Main operation of the decade counter is as follows: When a clock pulse is taken as an input, only one output is made high for first clock pulse and remaining all output pins will be made low. For the second clock pulse, another output pin is made high and remaining all pins are made low and so on. Time period of the output pin is high according to the width of the pulse. CD4017 is used in many applications where counter is needed. 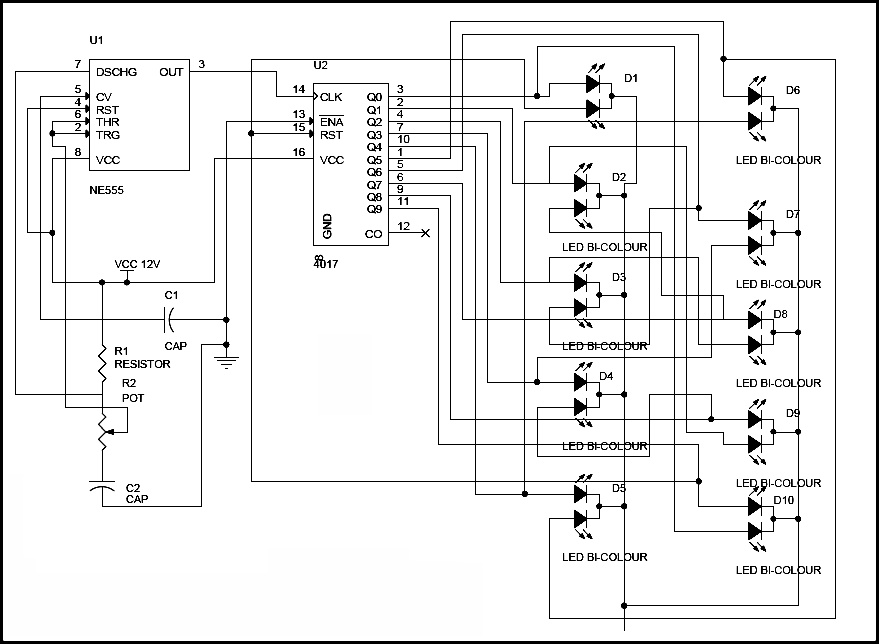 
LED Flasher is a simple circuit which will blink the LEDs in regular time period. This circuit can be used for decoration purpose or can be used for a signaling purpose and many more.

The 555 timer is used to generate the PWM signal which will cause the LEDs to blink. The speed of the blinking by LED is determined by the potentiometer connected to the 555 timer. The PNP transistor is used to flash or blinks the LEDs.