In this project, I will show you how to build a simple Mains Operated LED Light Circuit, which can light up LEDs directly from the mains supply.

WARNING: This project is not for beginners as it involves AC Mains supply. Make sure that you have an adult / expert supervision if you are planning to implement a similar project. 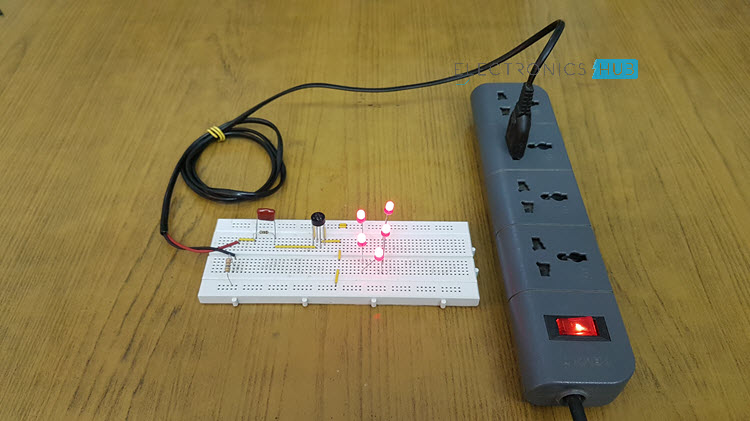 Here, we have described a simple circuit which you can easily made and install in your homes and will not only save resources but your energy and money will also be saved. 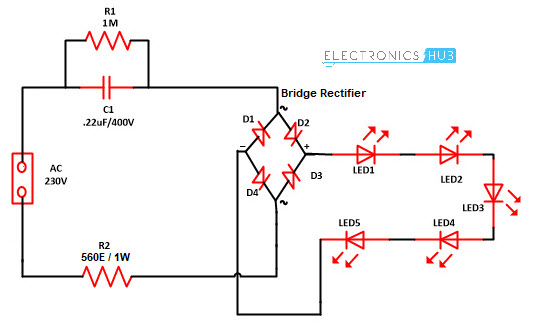 Components used in this Circuit

This simple circuit is based on simple components: Bridge rectifier, resistors, LEDs and capacitor. All the components used in this circuit are easily available in market. So you can make this circuit and install in your homes and offices. Before understanding the working of circuit first have a look on the component description.

A rectifier is an electronic circuit used for converting alternating current (AC) to direct current(DC). And the process of converting alternating current to direct current by allowing one way electron flow is called as rectification. In full wave rectifier four diodes are connected in a circuit to form a bridge. In this approach, we are utilizing both positive and negative cycles of AC.

Diode D1 and D3 are in series with the load resistance RL hence current flows through RL as shown in figure.

During negative half cycle of secondary voltage, the P end becomes negative and Q end become positive. Diode D2 and D4 are forward biased hence they start conducting . Whereas diode D1 and D3 are reversed biased.

Diode D2 and D4 are in series with the load resistor RL hence current flows through RL  as shown in figure. It may be seen that again current flows from A to B through the load i.e. in the same direction as for the positive half cycle. Thus DC voltage is obtained across load RL  . Output waveform of a bridge rectifier is shown in figure below. The advantage of Bridge rectifier is that its output is higher than of full wave and half wave rectifier.

All material have some type of opposition to the current flow. This opposition is called resistance. The resistance of a material is determine by the number of free electrons in the material. There are various type of resistor available such as carbon film, carbon composition, filament resistor and many more which can be used in an electronics or electrical circuit to determine the resistance.

Resistance of circuit depends upon p, L and A with the following equation. 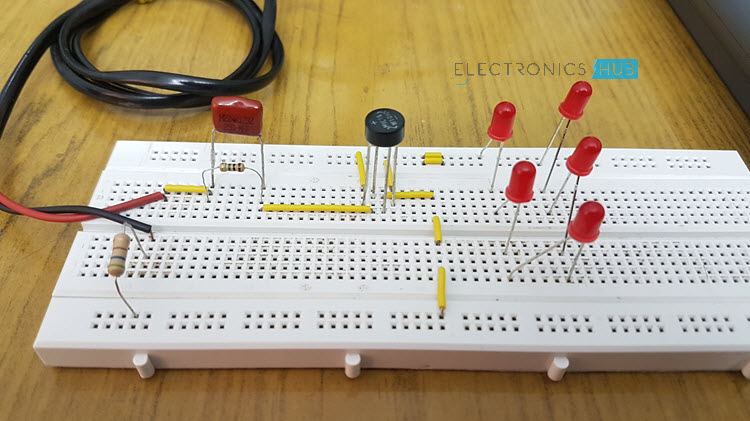 Working of circuit is very simple. Assemble the circuit properly as shown in circuit diagram. Now apply AC mains. Resistor R2 is used as current limiting component and resistor R1 is used with capacitor C1 so that it will discharge the capacitor which prevents lethal shock.

Now this power supply is provided to the bridge rectifier circuit which will convert the AC to DC and also reduces the voltage with the help of current limiting components. Now this power supply is passed to LEDs and the LED connected at the output start glowing. You can use bridge rectifier available in market or you can make your own with the help of four diodes. Maximum you can use up to 20 LEDs.