To the each node in a given circuit, we apply the KCL except for the referenced node. Suppose if the given circuit has N nodes, then we get N-1 simultaneous equations to find the N-1 unknown node voltages.

1) Check the possibility to transform voltage sources in the given circuit to the current sources and transform them.

2) Identify the nodes present in the given circuit and assign one node as reference node and with respect to this ground or reference node , label other nodes as unknown node voltages.

3) Assign the current direction in each branch in the given circuit (it is an arbitrary decision).

Consider below DC circuit, in which branch currents are to be determined  using the nodal analysis. 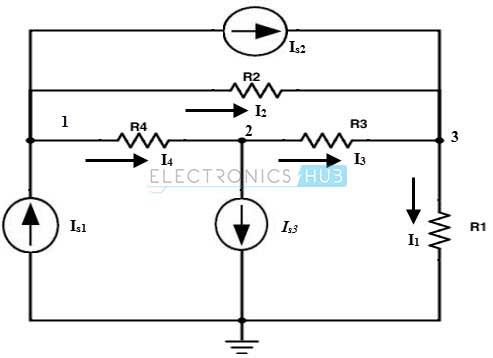 As a first step in nodal analysis, we have to select the reference node which is to be connected to the zero or ground potential as indicated below.

Secondly, we apply Kirchoff’s Current Law (KCL) to each node in the circuit except the reference node. By applying KCL at node 1 we get,

By applying KCL at node 2 we get

Applying KCL at node 3 we get

Likewise, we can write the KCL equations for i th node. And hence

Gii = The sum of conductance connected to the i th node.

Gij = The sum of conductance connected between i and j nodes.

By solving the above three equations we get the branch voltages at respective nodes and thereby we can calculate branch currents.

Determine the node voltages   and  currents in each branch using nodal analysis method in the given circuit.

By applying KCL at node 1, we get

By applying KCL at node 2, we get

By solving above two equations, we get

The currents in each branch is given as

Consider the above example in which a voltage source is connected between the 2 and 3 nodes. The calculations become more difficult if we analyse the circuit with voltage source. The analysis of this circuit becomes easier if we create a super node by shorting 2 and 3 nodes.

By applying kirchoff’s current law at the node 1 we get,

And also voltage in the voltage source is given as

From the above three equations, we can easily find out the three unknown voltages in the circuit.

Consider the below circuit and  find the three unknown node voltages V1, V2 and V3 by using super node technique. 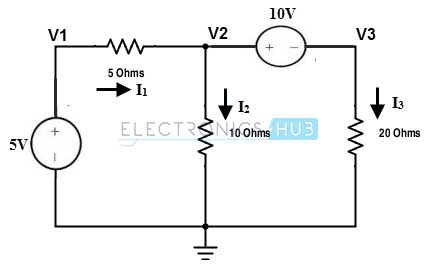 At node 1, source is connected to the reference node and hence V1 becomes 5v

A super node is formed by enclosing the nodes 2 and 3. By applying KCL at this super node we get 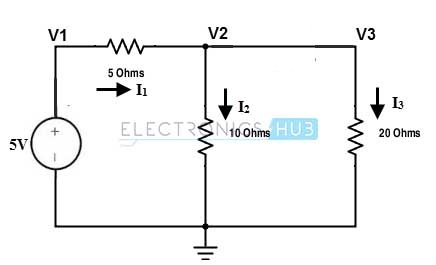