In this tutorial, we will learn about Kirchhoff’s Laws. Kirchhoff’s Current Law or KCL and Kirchhoff’s Voltage Law or KVL are two very important mathematical equalities in electrical circuit analysis.

Many of the electrical circuits are complex in nature and the computations required to find the unknown quantities in such circuits, using simple ohm’s law and series/parallel combination simplifying methods is not possible. Therefore, in order to simplify these circuits Kirchhoff’s laws are used.

Before going to know more about Kirchhoff’s law, we have to consider some of the terms related to electric circuits.

Node: Node or junction is a point in the circuit where two or more electrical elements are connected. This specifies a voltage level with a reference node in a circuit.

Branch: The continuous conducting path between two junctions which contains electrical element in a circuit is referred as branch.

Loop: In an electrical circuit a loop is an independent closed path in a circuit that follows the sequence of branches in such a way that it must start and ends with same node and it shouldn’t touch any other junction or node more than once.

Mesh: In an electrical circuit mesh is a loop that doesn’t contain any other loop in its interior. 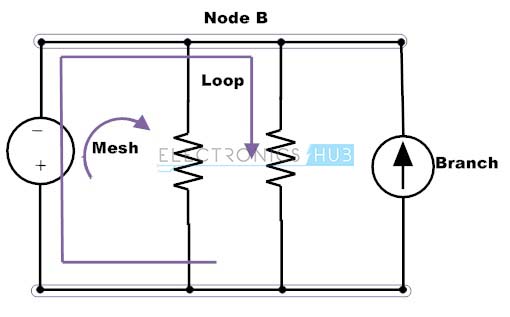 In 1847, Gustav Robert Kirchhoff, a German physicist was developed these laws to describe the voltage and current relationship in an electric circuit. These laws are: Kirchhoff’s Voltage Law (KVL) and Kirchhoff’s Current Law (KCL).

This is also called as the law of conservation of charge because charge or current cannot be created or destroyed at the junction or node. It states that the algebraic sum of currents at any node is zero. Thus the current entering at a node must be equal to sum of current out of the node.

Consider the below figure where we have to determine the currents IAB and Ix by using KCL . 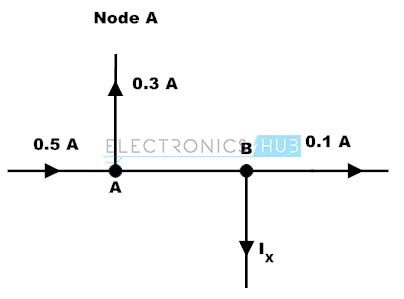 By applying Kirchhoff’s Current Law at point A, we get

Similarly by applying KCL at point B, we get

If the current flows from lower potential to higher potential, then we consider it as a voltage rise. Thus, the energy dissipated by the current must be equal to the energy given by the power supply in an electric circuit. 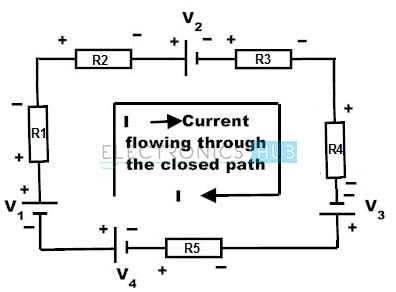 1. Let us consider the single loop circuit which is shown below and assume the current flow direction as DEABCD closed path. In this circuit, by using KVL we have to find the voltage V1. 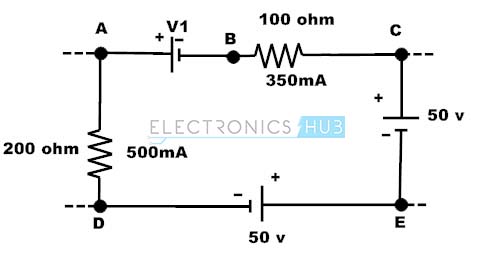 By applying KVL to this closed loop, we can write as

Voltage of point A with respect to point E. VAE = I * R

Consider voltage at point A with respect to point B, VAB = V1

Then by using KVL

2. Consider the below typical two loop circuit where we have to find the currents I1 and I2 by applying the Kirchhoff’s laws.

There are two loops inside the circuit and consider the loop paths as shown in figure.

By applying KVL to these loops we get

By solving the above 1 and 2 equations we get, 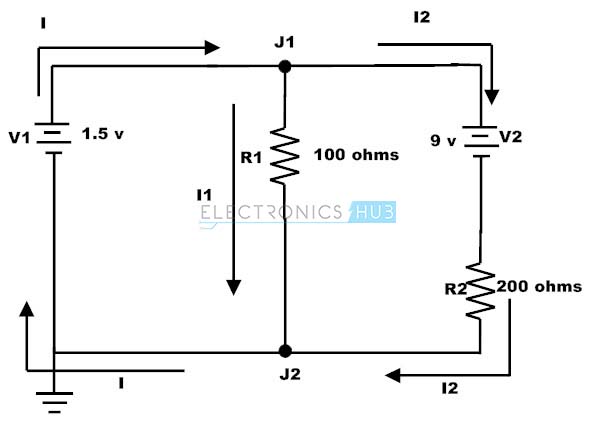 Apply Kirchhoff’s current law at both junctions, then we get

Apply Kirchhoff’s voltage law to the both loops, then we get

Substituting I1 value in the above equation then