An LED matrix is a two dimensional array of LEDs that can be used to display symbols, characters or even images. Based on the orientation of the LEDs in the matrix, there can be two types of LED matrices.They are Common Row Anode and Common Row Cathode.

LED matrix modules are one of the commonly used display devices and are used in major applications like electronic display panels and notification systems.
Select the Next Set of Arduino Projects You Want to Learn in Electronicshub: Arduino Projects» 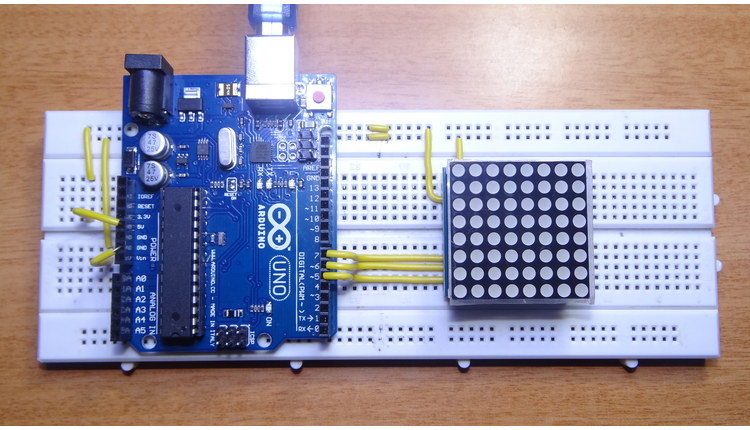 One pin provides the clock signal to the LED display driver IC (MAX 7219) while another pin is used to transmit the serial data to the IC for displaying on the LED matrix. The corresponding pins must be appropriately mentioned in the program.

An 8 x 8 LED matrix display is used in this project to display the information. LED matrices are available in different styles like single color, dual color, multi-color or RGB LED matrix.

They are also available in different dimensions like 5 x 7, 8 x 8, 16 x 16, 32 x 32 etc. Based on the arrangement of the LEDs in the matrix, an LED matrix can be either common row anode or common row cathode. 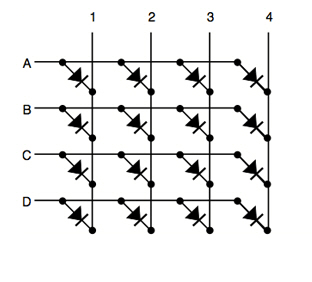 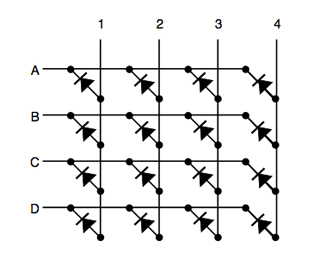 The LED matrix used in this project is a common row cathode type LED matrix. While developing the project, the type of LED matrix must be known and the program must be written accordingly.

The LED matrix can be driven in two ways. They are parallel (where each row or column are sent with parallel data) and serial (where the data is sent serially and an IC is used to convert this serial data into parallel data).

MAX 7219 is a common cathode display driver with serial input and parallel output. It is used to interface microprocessors and microcontrollers with 64 individual LEDs (8 x 8 LED matrix for example has 64 LEDs), seven segment LED displays up to 8 digits or bar graph displays.

Pre-wired MAX 7219 and 8 x 8 LED matrix modules are available in the market. They can be used for convenience. 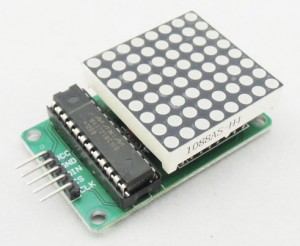 The aim of the project is to interface an Arduino Uno board with an 8 x 8 LED matrix to display information.

Even though a single 8 x 8 LED matrix with corresponding MAX 7219 IC is used in this project, multiple LED matrices can be connected in series for long scrolling display. Connect the components as shown in the circuit diagram. The working of the system is as follows.

3 of the 14 available digital input / output pins are used to control the display driver IC MAX 7219. The 3 pins on the MAX7219 IC are clock, data in and load (or cs in case of MAX 7221 IC). A maximum clock frequency of 10MHz can be applied. DIN (Data in) accepts the serial data from the microcontroller or Arduino board.

The load pin (or CS or chip select pin in case of Max 7221 IC) latches the serial input data on its rising edge.

Another important pin on MAX 7219 is the ISET, which sets the peak current to the segment to drive all the LEDs. It is connected via a resistor (R1), which is called RSET. The capacitors filters out any noise in the supply.

When the serial data in is sent using the Arduino (through the program), the serial data is converted into segments and digits to drive columns and rows of the LED matrix. According to the data sent, the corresponding LEDs on the matrix light up and display the message.

The program written here is for scrolling text display. It might be difficult to view long scrolling data on a single 8 x 8 LED matrix. Hence, multiple LED matrices can be chained to form a long matrix.

(The positioning of the LED Matrix in the chain is important. The first LED matrix must be placed at the right of the chain.)

We have already seen in the previous project as how the 8×8 LED Matrix and the MAX7219 IC are connected. So, I’ll skip that part of the connection and proceed with how MAX7219 IC is interfaced with Arduino.

But I haven’t mentioned the Pin Diagram of a typical 8×8 LED Matrix in the previous circuit. So, to have a fulfilment, the following image shows the pin out of an 8×8 LED Matrix. 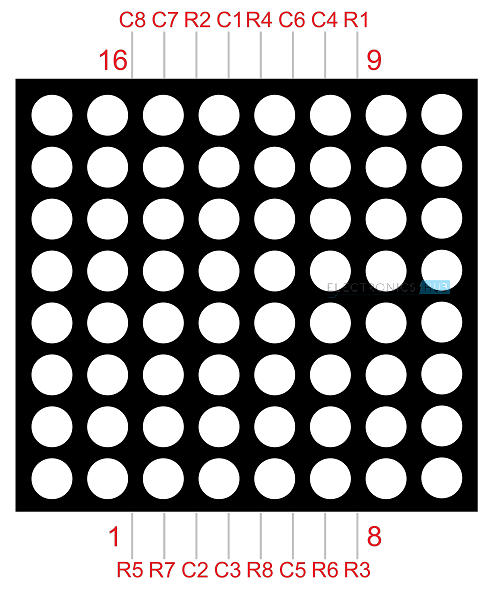 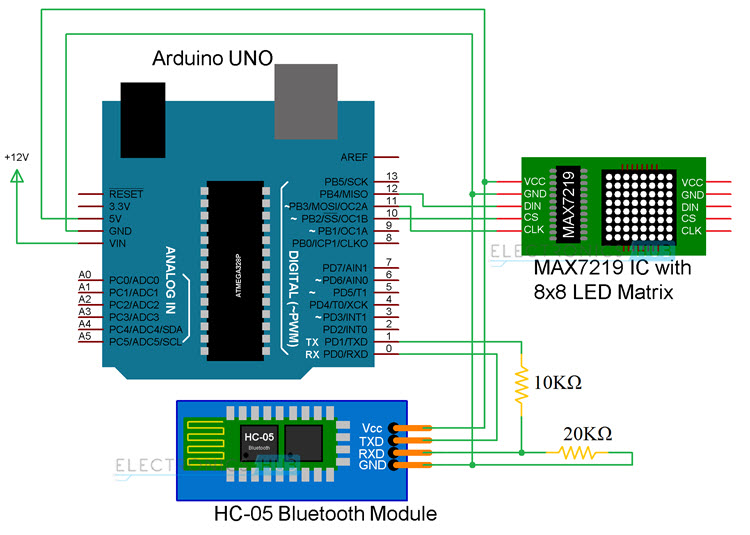 Since the communication between Arduino and MAX7219 is based on SPI Communication Protocol, all we need is three pins from Arduino (Data, Clock and Chip Select). The CS, CLK and DIN pins of the MAX7219 IC Board are connected to pins 10, 11 and 12 of the Arduino.

As we are using the Bluetooth connection between Arduino and Android device, the RX and TX pins of the HC-05 Bluetooth Module are connected to TX and RX pins of the Arduino (Pins 1 and 0).

A dedicated app for Android based devices is designed for this project. The layout of the app which is already installed on a mobile phone is shown in the following image. 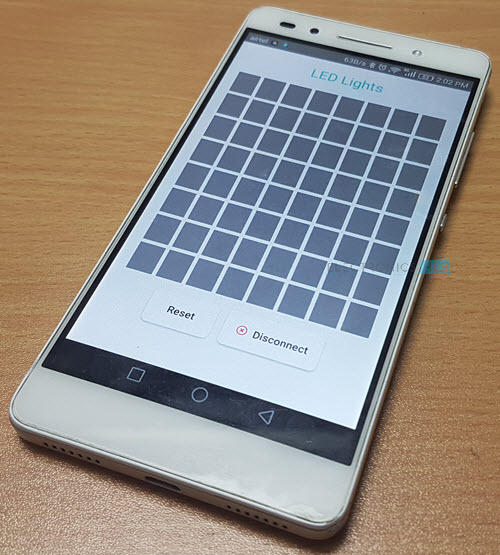 A Reset button is given at the bottom, using which you can reset the 8×8 LED Matrix i.e. all the LEDs will be turned OFF. The disconnect button will get disconnected from the Bluetooth.

NOTE: The app utilizes the Bluetooth feature of the phone. Hence, necessary permissions must be given. Also, the HC-05 Bluetooth Module must be paired with the device (Phone). 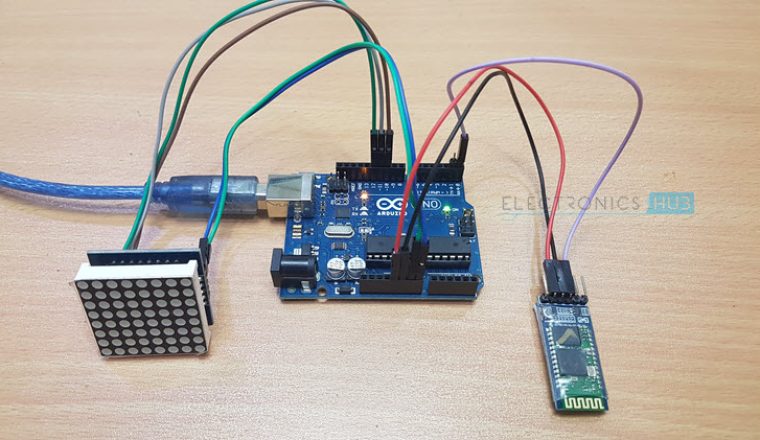 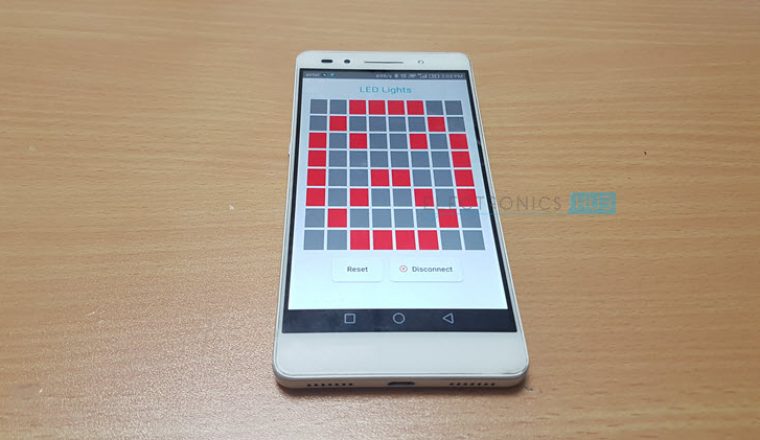 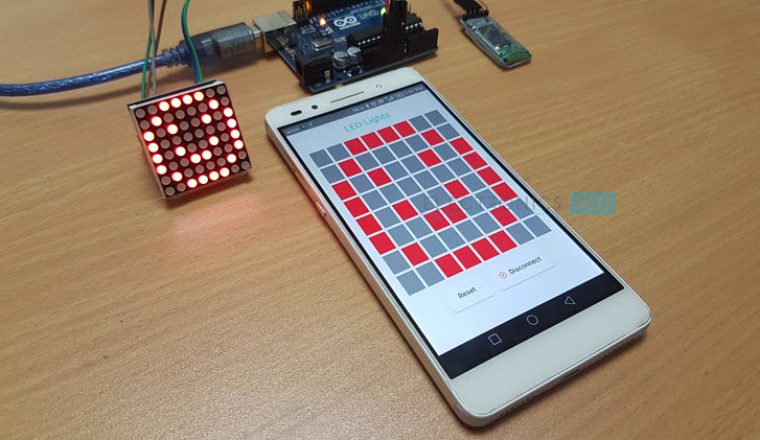