In Direct Current (DC), the flow of electric charge is unidirectional. In DC, the voltage and current maintain a constant polarity and direction. The source of direct current is the battery. On the other hand, in Alternating Current (AC), the flow of electric charge reverses direction periodically. In AC, the voltage changes polarity from positive to negative and vice versa over a period of time.This change in the polarity of the voltage is because of the change in the direction of current.AC is the supply used to power up the households, offices, industries, etc.Even though sine wave is the most common form of AC supply, some applications use different wave forms like triangular wave, square wave and sawtooth wave.

The most common form of AC supply is sinusoidal wave. The mathematical function describing a typical AC voltage is

V (t) is the voltage in the function of time. The voltage changes with time.

t is the variable time in seconds.

f is the frequency of the sine wave.

In DC circuits, the calculation of current, voltage and power is carried out using Ohm’s law. Here the polarities of both voltage and current are assumed to be constant.

In case of pure resistive AC circuits, the values of inductance and capacitance are negligible. Hence the calculation of current, voltage and power will follow the same principles of Ohm’s law and Kirchhoff’s Circuit laws. The difference is in the use of instantaneous peak to peak value or rms value.

Resistor with DC and AC Supplies

A resistor with a DC power supply is given below 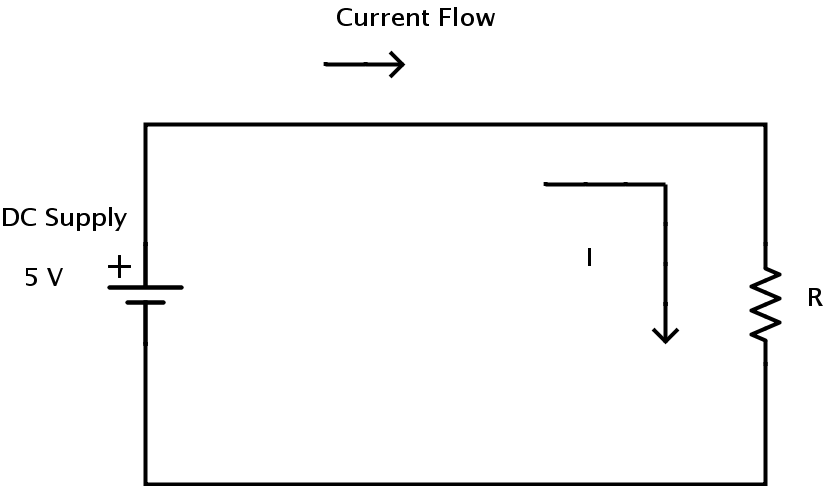 In DC resistive circuits, the resistance which is the ratio of voltage to current is linear.

A resistor with an AC power supply is given below 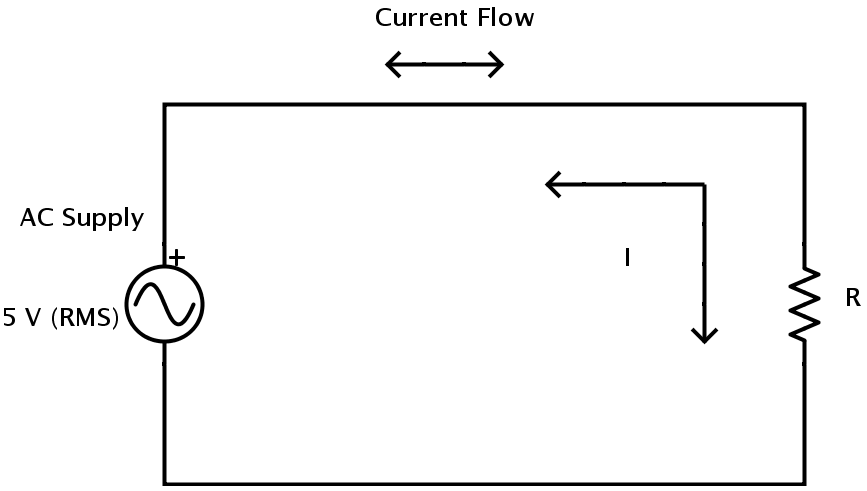 The resistance value of the resistor in both AC and DC circuits is same irrespective of the frequency of the AC supply voltage. The change in direction of current in AC supply does not affect resistors behavior. So the current in the resistor will rise and fall according to the voltage as it rises and falls.

The voltage and current in AC resistive circuit reach maximum, then fall to zero and reach minimum at the same time. They are said to be “in phase” as they rise and fall at exactly the same time. 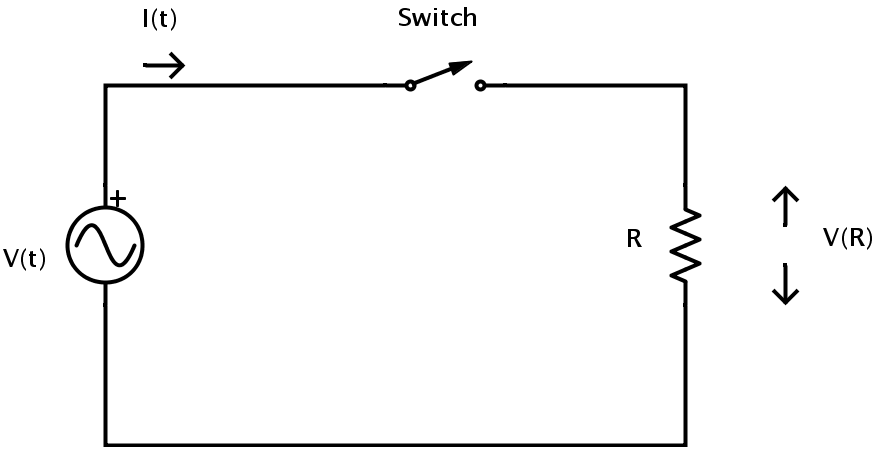 As the circuit is purely resistive, the effects of inductance and capacitance are negligible and the phase difference is 0. 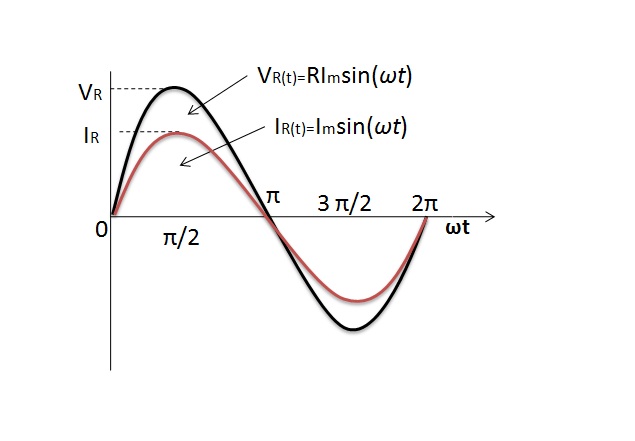 The instantaneous values of currents and voltages are “in phase” along the x- axis of the curve. They rise and fall at the same time and reach their maximum and minimum values exactly at the same time. This implies that their phase angle is θ = 00. The vector diagram representing this phase angle along with a comparison of maximum and minimum values of voltage and current is shown below. 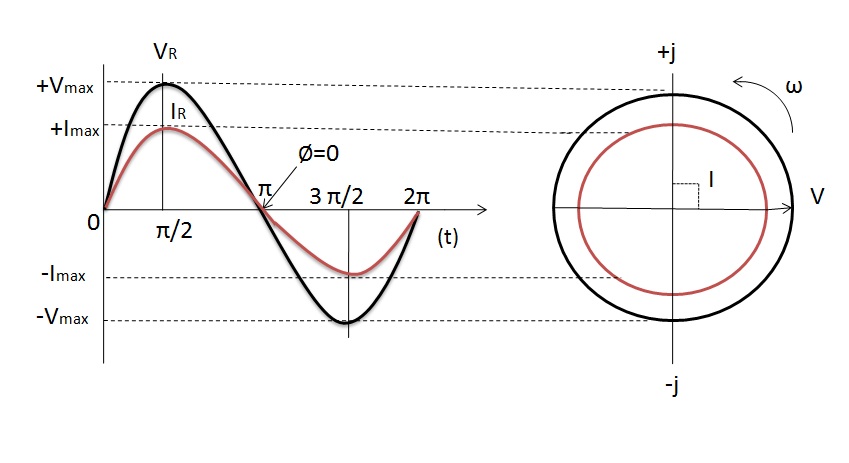 The instantaneous values of current and voltage in an AC resistive circuit can be utilized to give the resistance in its Ohmic form by using Ohm’s law.

Consider the following resistive circuit with an AC supply.

Let the instantaneous voltage across the resistor be VR.

Let IR be the instantaneous current which is flowing through the resistor.

As the above circuit is pure resistive in nature, the principles of Ohm’s can be applied.

From Ohm’s law, the voltage across the resistor at an instant t is

Similarly, the current flowing through the resistor at an instant t can be determined using Ohm’s law as

But the value VMax / R is nothing but the maximum current in the circuit denoted by IMax..

In case of pure resistive AC circuits, the phase angle between current and voltage is 00. Therefore φ = 00.  Hence the power factor Cos φ is Cos 00 = 1.

The power consumed by above mentioned circuit can be calculated using

Power in a Pure Resistance

In case of pure resistive AC circuits, the power consumed by the circuit is simply the product of voltage and the current as there is no phase angle between current and voltage.

The power waveform for a pure resistive AC circuit is shown below. 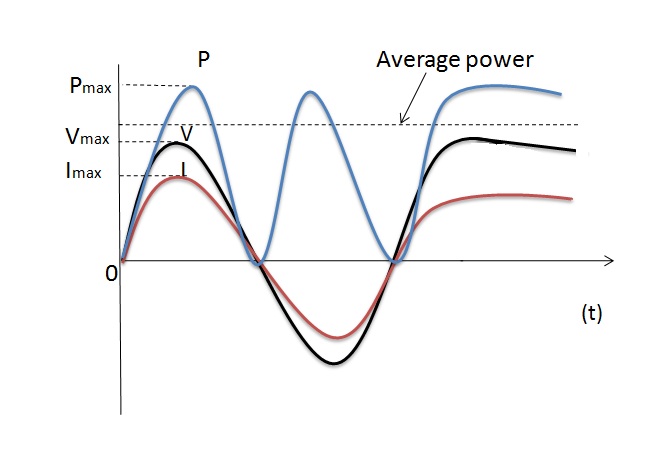 The power waveform consists of a series of positive pulses. This is because when both the voltage and current are positive in the first half cycle, their product which is the power is also positive. And when both the voltage and current are negative in the second half cycle, their productive power isagainpositive (-V x -I = +P). Hence the value of power is always greater than or equal to zero.

In case of pure resistive circuit with an AC RMS power supply, the power dissipated is same as that in case of a resistor connected to DC power supply.

VRMS and IRMS are rms values of voltage and current respectively.

P is power in Watts.

R is resistance in Ohms (Ω)

To compare the heating effects caused by AC and DC, the DC current should be compared to the RMS value of AC current but not to the maximum or peak current IMAX¬.

A heating element of resistive in nature is connected to an AC supply of 240 V. The power consumed by the heating element is 1.2 K Watts. The value of its resistance can be calculated as

Current flowing through the heating element is

A resistor of resistance 47 Ω is connected to a supply of 120 V.

The power consumed by the resistor is