A combinational logic circuit is one in which the present state of the combination of the logic inputs decides the output . The term combination logic means combining of two or more logic gates to form a required function where the output at a given time depends only on the input.

In the above figure, the circuit accepts the binary variables and depending on the logical combination of gates it generate outputs.

A combinational circuit can be designed using the following steps.

For minimizing Boolean expressions, various simplification techniques are available so that they reduce the number of gates, hence less implementation cost. These techniques include Boolean algebra theorems and identities, Karnaugh maps (K-maps), Quinne-McCluskey tabulation, etc. For hardware implementation of the combinational circuit, the following guidelines are mostly preferred.

This is the simple, effective and traditional method of designing a combinational circuit for small circuit. If the circuit is more complex, number of gates required is more and also it requires more number of wires in between them. Hence, designing such circuits may be less reliable and time consuming.

To overcome these problems, most of the combinational circuits are available in integrated circuits (ICs) which are extensively used in the design of the digital systems. Depends on the integration capability of gates, these ICs are classified into small, medium, large and very large scale ICs. 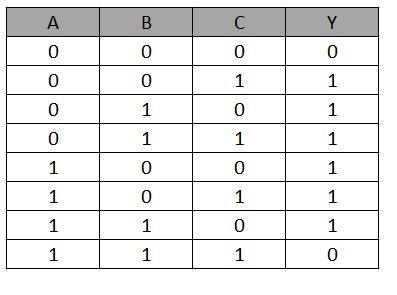 Now, the simplified Boolean expression for the above truth table for getting the output Y is obtained by using K-map simplification as 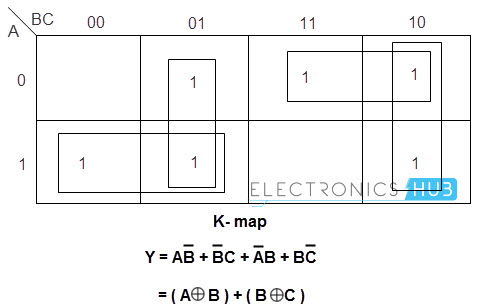 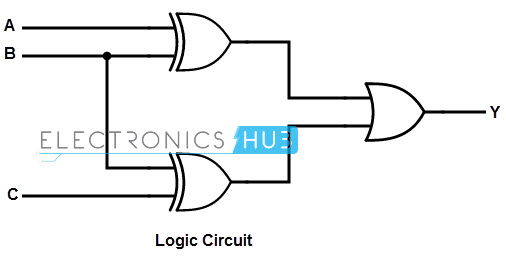 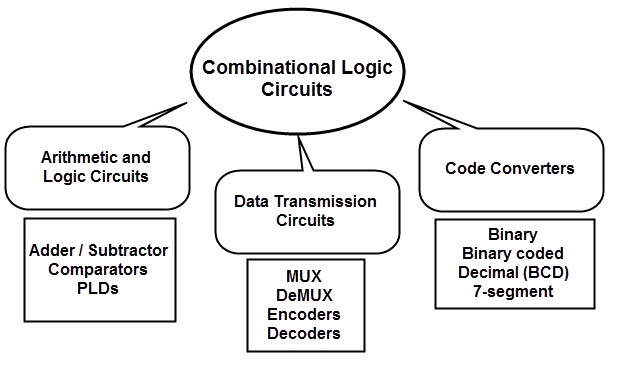 Arithmetic operations are one of the main functionalities of most computers and calculators. These operations are carried by the logic gates or simply combinational circuits which combines the several logic gates to perform the required function. These arithmetic functionalities of the combinational circuits include addition, subtraction, multiplication, etc.

Some of the combinational circuits used for these operations are Half- adder, Full-adder, Half-subtractors, Full subtractors, Adder-subtractors, Comparators, PLDs (Programmable Logic Devices), etc.

The most commonly used combinational circuits are multiplexers and de-multiplexers. A multiplexer logic circuit accepts the several data inputs and passes one of them through the output at a time. These are used in data selection, parallel to series conversion, data routing applications in digital systems.

A de-multiplexer circuit performs the reverse operation than that of the multiplexer. It accepts the single input and distributes it to multiple outputs. These are used in distributors as well as series to parallel converter applications.

Other essential data transmission circuits include encoders and decoders. A decoder logic circuit converts n-bit binary input code into 2n output lines. Each output line is activated for only one of the possible combinations of the inputs.

In some applications, it is required to interface two digital blocks of different coding systems. So a conversion circuit is used in between such circuits to convert the information. Some of these converters are binary to gray code, gray to binary, BCD to excess-3 code, Excess-3 to BCD code and seven segment code converter circuits.