Majority of modern communication is Digital in nature i.e., it is a combination of 1’s and 0’s. The digital data is transmitted either through wires (in case of wired communication) or wireless. Even in an advanced mode of communication, there will be errors while transmitting data (due to noise).

The simplest of errors is corruption of a bit i.e., a 1 may be transmitted as a 0 or vice-versa. To confirm whether the received data is the intended data or not, we should be able to detect errors at the receiver.

In this tutorial, we will learn about Parity Bit, Even Parity, Odd Parity, Parity Generator and Parity Checker with a practical example and practical circuit.

What is Parity Bit?

The parity generating technique is one of the most widely used error detection techniques for the data transmission. In digital systems, when binary data is transmitted and processed, data may be subjected to noise so that such noise can alter 0s (of data bits) to 1s and 1s to 0s.

Hence, a Parity Bit is added to the word containing data in order to make number of 1s either even or odd. The message containing the data bits along with parity bit is transmitted from transmitter to the receiver.

At the receiving end, the number of 1s in the message is counted and if it doesn’t match with the transmitted one, it means there is an error in the data. Thus, the Parity Bit it is used to detect errors, during the transmission of binary data.

Even Parity and Odd Parity

To produce two bits sum, one Ex-OR gate is sufficient whereas for adding three bits, two Ex-OR gates are required as shown in below figure.

It is combinational circuit that accepts an n-1 bit data and generates the additional bit that is to be transmitted with the bit stream. This additional or extra bit is called as a Parity Bit.

Let us assume that a 3-bit message is to be transmitted with an even parity bit. Let the three inputs A, B and C are applied to the circuit and output bit is the parity bit P. The total number of 1s must be even, to generate the even parity bit P.

The figure below shows the truth table of even parity generator in which 1 is placed as parity bit in order to make all 1s as even when the number of 1s in the truth table is odd. 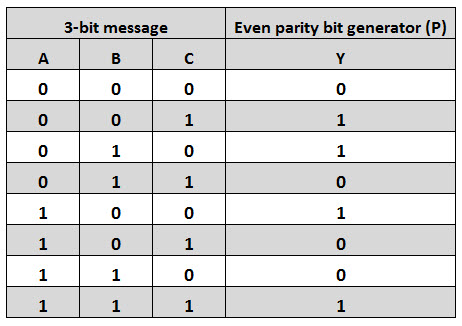 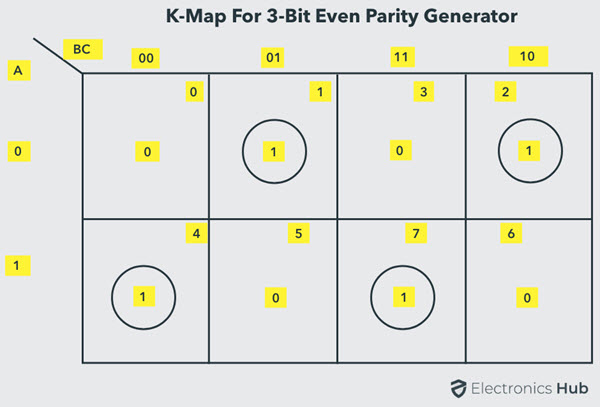 From the above truth table, the simplified expression of the parity bit can be written as 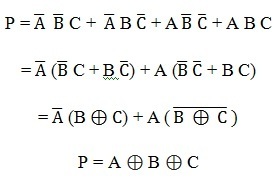 The above expression can be implemented by using two Ex-OR gates. The logic diagram of even parity generator with two Ex – OR gates is shown below. The three bit message along with the parity generated by this circuit which is transmitted to the receiving end where parity checker circuit checks whether any error is present or not.

To generate the even parity bit for a 4-bit data, three Ex-OR gates are required to add the 4-bits and their sum will be the parity bit. 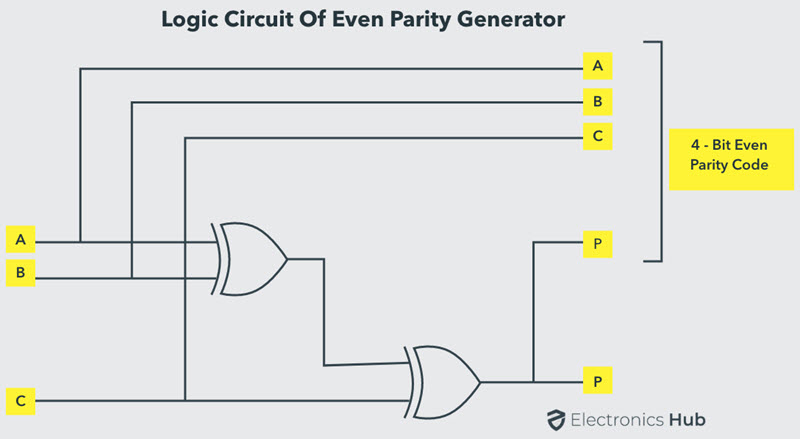 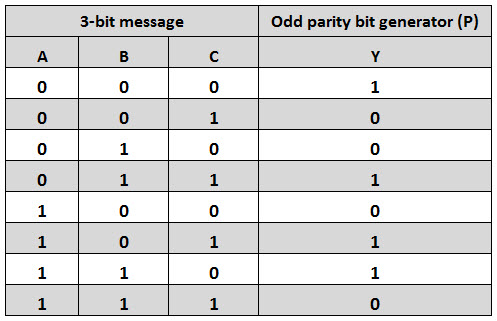 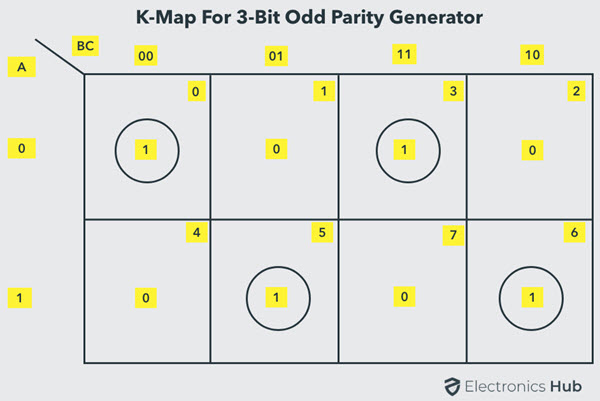 The above Boolean expression can be implemented by using one Ex-OR gate and one Ex-NOR gate in order to design a 3-bit odd parity generator.

The logic circuit of this generator is shown in below figure, in which two inputs are applied at one Ex-OR gate, and this Ex-OR output and third input is applied to the Ex-NOR gate, to produce the odd parity bit. It is also possible to design this circuit by using two Ex-OR gates and one NOT gate.

Consider that three input message along with even parity bit is generated at the transmitting end. These 4 bits are applied as input to the parity checker circuit, which checks the possibility of error on the data. Since the data is transmitted with even parity, four bits received at circuit must have an even number of 1s.

If any error occurs, the received message consists of odd number of 1s. The output of the parity checker is denoted by PEC (Parity Error Check). 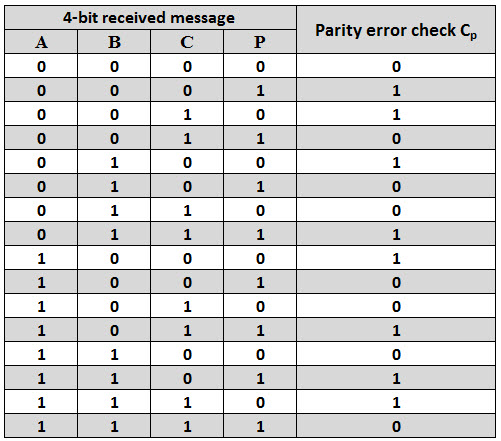 The above truth table can be simplified using K-map as shown below.

Consider that a three bit message along with odd parity bit is transmitted at the transmitting end. Odd parity checker circuit receives these 4 bits and checks whether any error are present in the data.

The below figure shows the truth table for odd parity generator where PEC =1 if the 4-bit message received consists of even number of 1s (hence the error occurred) and PEC= 0 if the message contains odd number of 1s (that means no error). 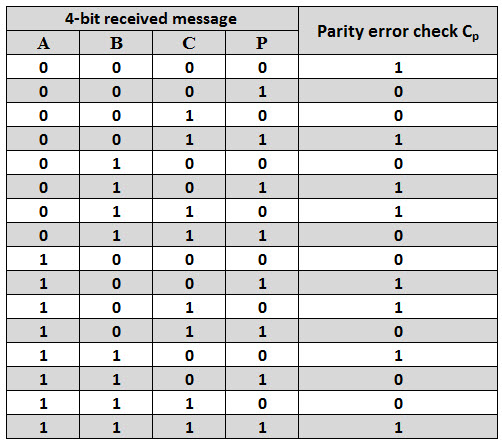 The expression for the PEC in the above truth table can be simplified by K-map as shown below. 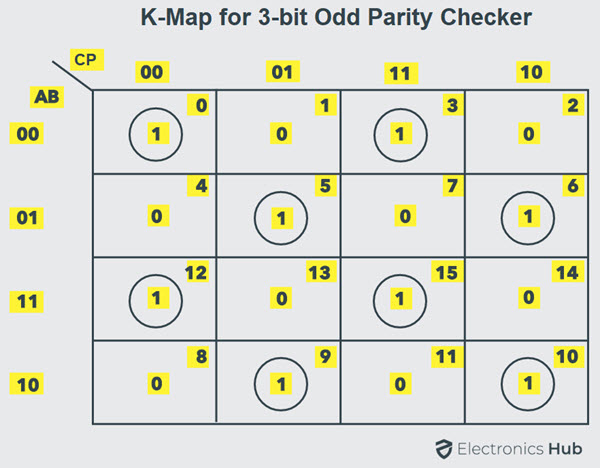 After simplification, the final expression for the PEC is obtained as

The expression for the odd parity checker can be designed by using three Ex-NOR gates as shown below.

It is a 9-bit parity generator or checker used to detect errors in high speed data transmission or data retrieval systems. The figure below shows the pin diagram of 74180 IC. 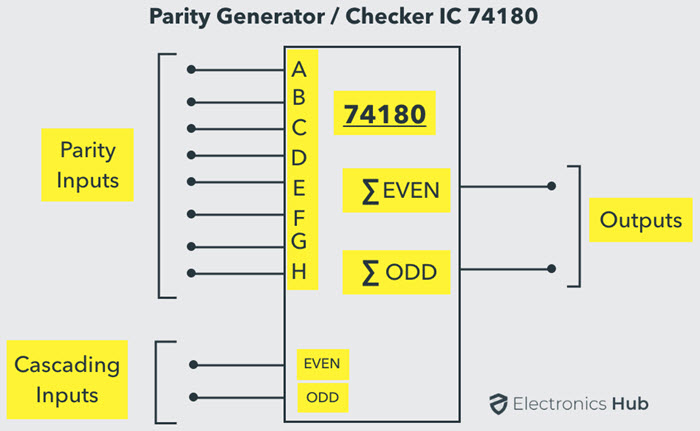 This IC consists of eight parity inputs from A through H and two cascading inputs. There are two outputs even sum and odd sum. In implementing generator or checker circuits, unused parity bits must be tied to logic zero and the cascading inputs must not be equal.