However to display the characters and numbers (in order to produce the decimal readout), seven-segment displays are most commonly used. Mostly these displays are driven by the output stages of digital ICs (to which the visual indication of the output stages has to be performed) such as latches and decade counters, etc.

But these outputs are in the form of 4-bit binary coded decimal (BCD), and not suitable for directly driving the seven-segment displays.

A display decoder is used to convert a BCD or a binary code into a 7 segment code. It generally has 4 input lines and 7 output lines. Here we design a simple display decoder circuit using logic gates.

Even though commercial BCD to 7 segment decoders are available, designing a display decoder using logic gates may prove to be beneficial from economical as well as knowledge point of view.

Theory Behind the Circuit:

The first and foremost aspect of this circuit is decoder. A decoder is a combinational circuit which is used to convert a binary or BCD (Binary Coded Decimal) number to the corresponding decimal number . It can be a simple binary to decimal decoder or a BCD to 7 segment decoder.

To understand the design and operation of these logic circuits, one needs to have a good knowledge about Boolean algebra and logic gates. For example few basic Boolean algebra rules to be followed are the complementary law, associative law, De-Morgan’s law etc.

The truth table for the decoder design depends on the type of 7-segment display. As we mentioned above that for a common cathode seven-segment display, the output of decoder or segment driver must be active high in order to glow the segment.

The figure below shows the truth table of a BCD to seven-segment decoder with common cathode display. In the truth table , there are 7 different output columns corresponding to each of the 7 segments. 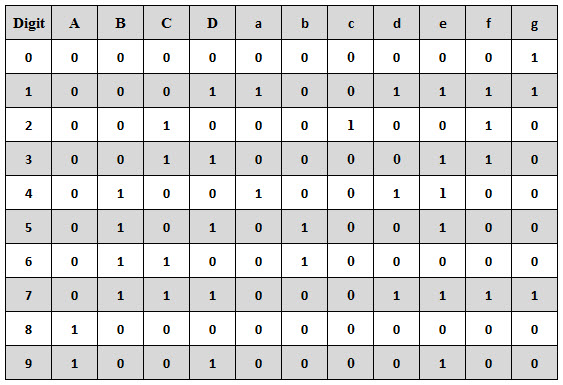 From the above truth table, the Boolean expressions of each output functions can be written as

Step 3: The third step involves constructing the Karnough’s map for each output term and then simplifying them to obtain a logic combination of inputs for each output.

The below figures shows the k-map simplification for the common cathode seven-segment decoder in order to design the combinational circuit.

From the above simplification, we get the output values as 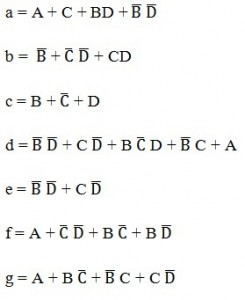 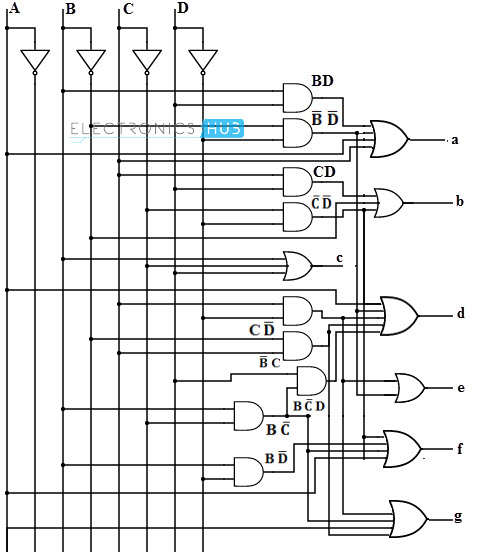 The circuit operation can be understood through the truth table itself. When all the inputs are connected to low logic , the output of the combinational logic circuit would be so as to drive all the output LEDs except ‘g’ to conduction.  Thus the number 0 will be displayed. Similar operation would take place for all other combinations of the input switches.