You have already seen one Robotic Arm project from Electronics Hub, which we did everything from scrap (except for the motors and Arduino). We got very good response from you guys for that project and based on that we decided to make a better version of it, Version 2.0, if I must say.

This DIY Arduino & Bluetooth Robotic Arm Project is operated using an Android Phone over Bluetooth Communication. We have developed an Application for Android Phones, using which you can control the Robotic Arm for manual operation or program it for fully automatic operation. I’ll explain them in the later sections.

WANT TO BUY THIS PROJECT? MAIL US 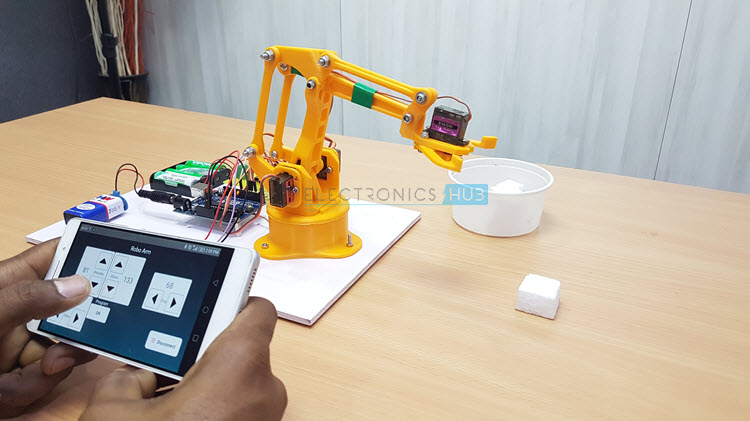 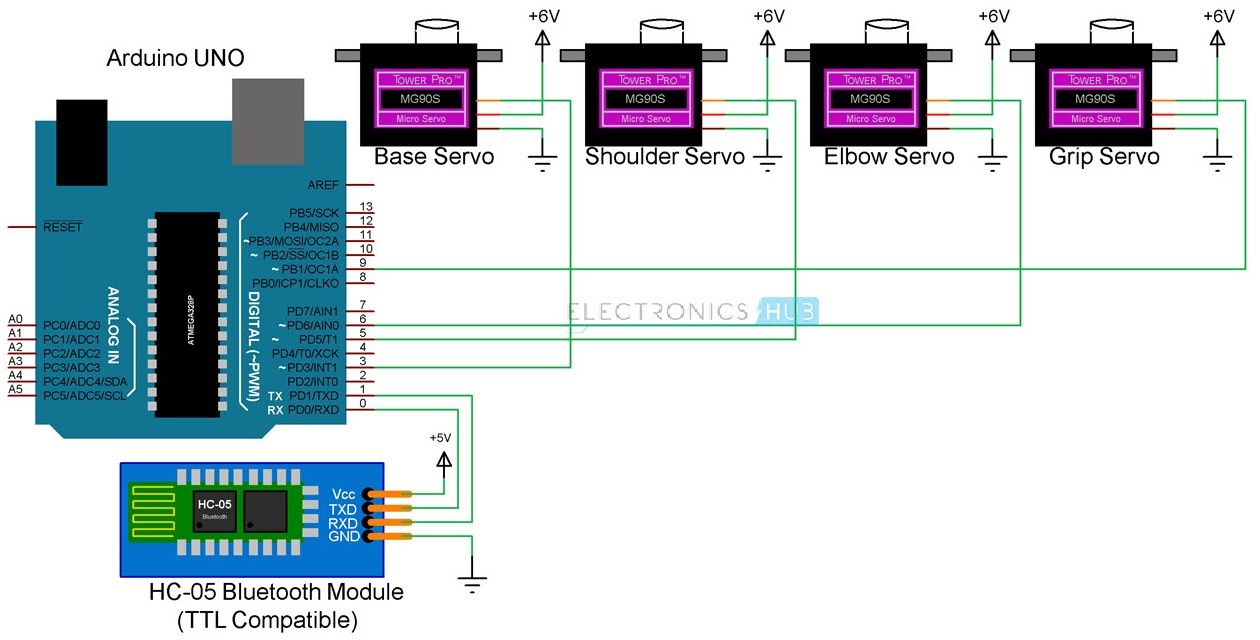 The circuit diagram seems very simple but the construction part of the Robotic Arm is a little bit complicated.

Arduino UNO and Bluetooth Module are pretty straight forward in the list of components but the interesting components are the Metal Gear Servos and the 3D Printed Robotic Arm parts.

The Servos used in the Robotic Arm construction are TowerPro MG90S Metal Gear Micro Servos. We have chosen this particular servo because the regular plastic gear servos were not stable and also the stall torque is less. 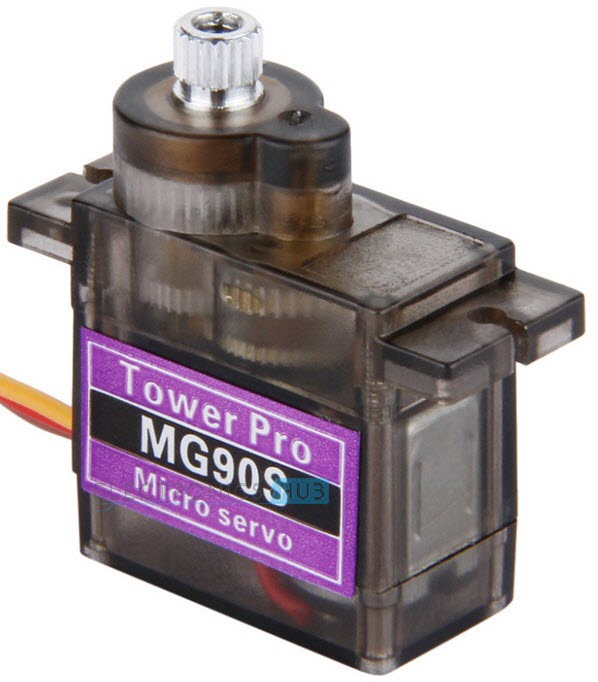 At 6.6V supply, this metal gear servo provides a stall torque of 2.2Kg/CM (which is considerably more than that of the regular SG90 Servo).

One of the important feature of any Robotic Arm project is the aesthetics. So, we decided to go for 3D Printed Parts for the Robotic Arm. daGHIZmo designed a 3D Robotic Arm called EEZYbotARM and uploaded the files in Thingiverse website.

For 3D Model files of the Robotic Arm, please visit this link.

Based on those 3D model files, we made the parts using a local 3D Printer outlet. The quality is very good and the dimensions are also very close to the real object (not accurate). 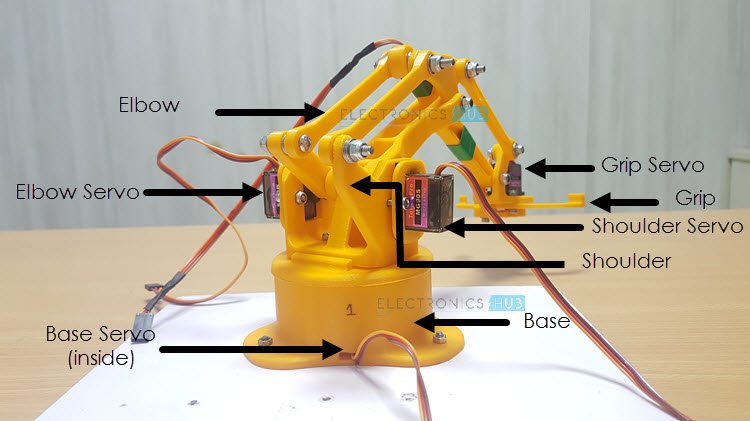 If you observe the above image, I have designated the parts of the Robotic Arm as Base, Shoulder, Elbow and Grip. Subsequently, the servo motors are also named Base Servo, Shoulder Servo, Elbow Servo and Grip Servo.

As mentioned earlier, the design of the circuit is very simple. The Control Signals of the 4 Servo Motors are connected to 4 PWM Pins of the Arduino UNO as follows: Base Servo – Pin 3, Shoulder Servo – Pin 5, Elbow Servo – Pin 6 and Grip Servo – Pin 9 of Arduino respectively.

All the servo motors are given a 6V power supply while the Arduino UNO is given with a 9V supply. The TX and RX of the HC-05 Bluetooth Module are connected to the RX0 and TX0 pins of the Arduino i.e. Pins 0 and 1.

NOTE: Do not connect the Bluetooth Module while programming the Arduino.

If I explain the step-by-step assembly procedure of the 3D Parts of the Robotic Arm, it will be a very lengthy and boring read. So, I’ll post some pictures of the completed robot and will make a separate video on how to assemble the Robotic Arm. In the meantime, take a look at these images. 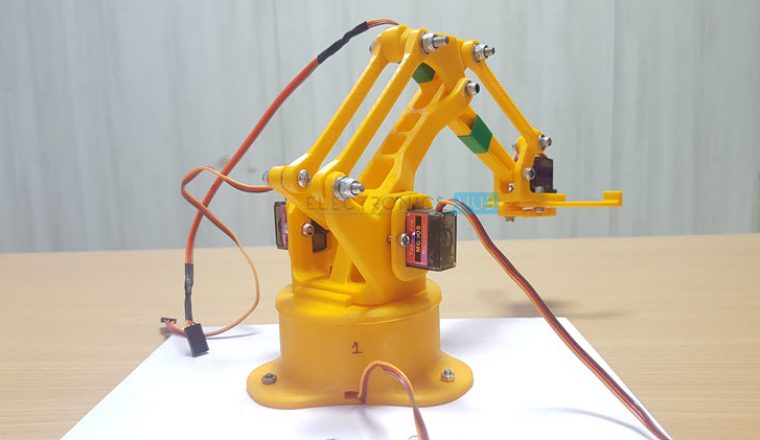 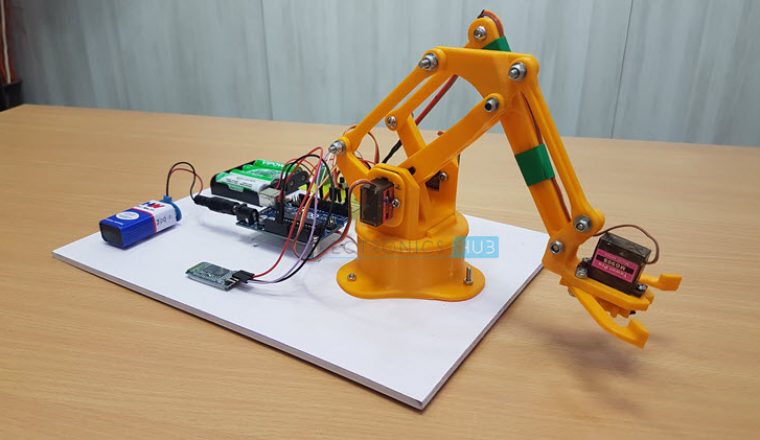 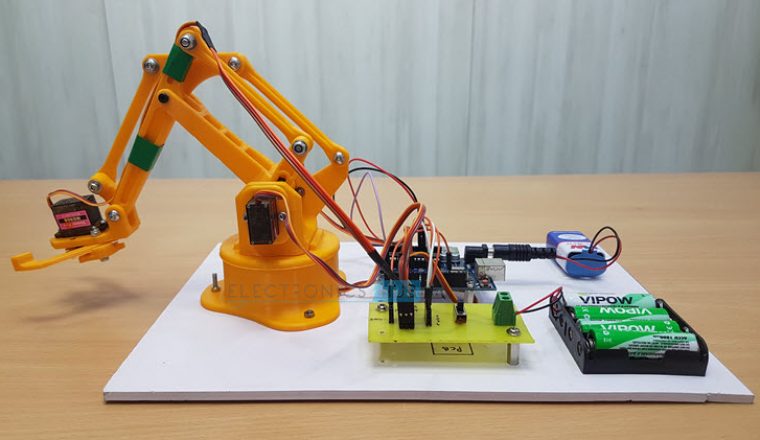 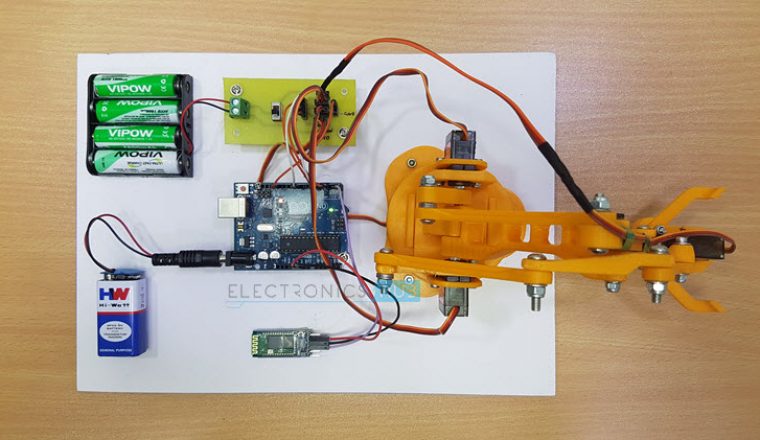 Instead of using Potentiometers or serial communication through computer, we have decided to take a step further and design a simple Application for Android Phones in order to control the robotic arm. 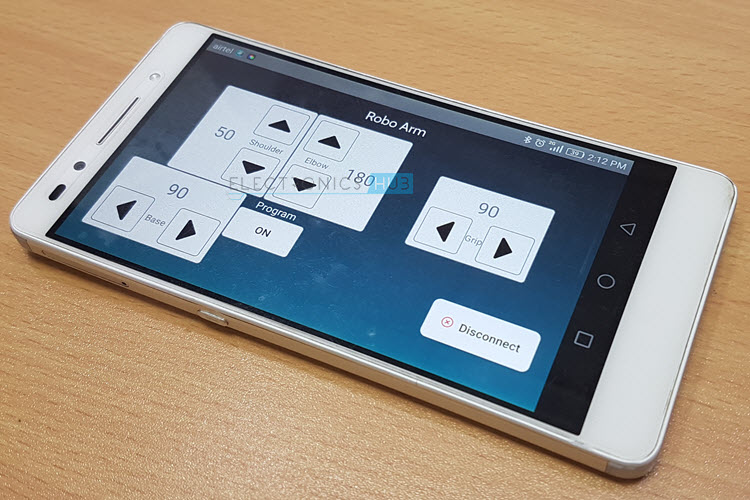 There are four pairs of Arrow Control Keys each pair for Shoulder, Elbow, Base and Grip Servos respectively. There is a Program button, using which, you can enable the program mode. More about this in the working of the project.

WANT TO BUY THIS PROJECT? MAIL US

A simple, 3D Printed, Android Phone based, Arduino & Bluetooth Controlled Robotic Arm is designed and developed in this project. We will now see the operation and working of this Robotic Arm.

Install the Application in your Android Phone and provide necessary permissions to access the device’s Bluetooth. If the Bluetooth Module (HC-05) is not paired with the mobile, pair it using the Bluetooth Settings of the Phone.

Once the device is paired, open the App and it will automatically list out the paired Bluetooth devices. Select the correct Bluetooth Module and if everything goes well, you will enter into the main control panel.

Here, you can see controls for the four servo motors of the Robotic Arm i.e. Base, Shoulder, Elbow and Grip. Use the arrow keys of the respective Servo motor and control the robotic arm. This part of the working is the Manual Operation of the Robotic Arm, where every movement must be manually adjusted. 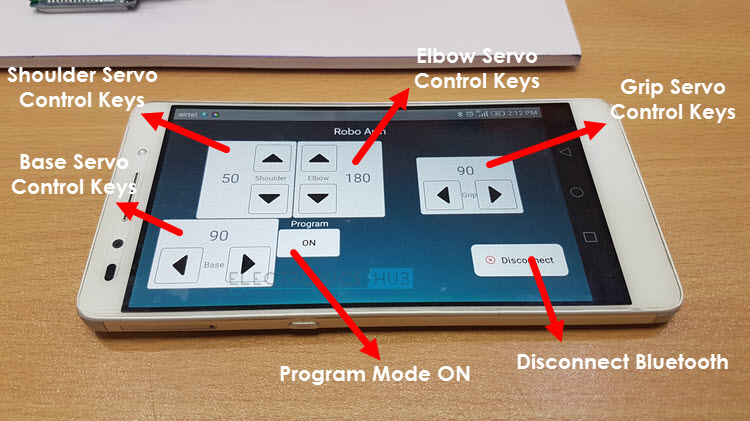 Next comes the interesting part. You can see a button in the center called “Program”. At any time of the operation, if you press this button, the Robotic Arm will RESET (moves to a default position) and the Programming Mode is activated.

In this mode, you can program the Robotic Arm to perform a series of tasks in an automatic fashion. For example, if you want to pick small objects from one place and place it in another place, you do not have to manually adjust the values all the time.

All you need to do is to enter in to programming mode and teach the Robotic Arm to follow a series of steps to achieve the task. Once you program the Robotic Arm you can run the program and it will loop those programmed steps until stopped.

You can also pause the automatic operation anytime and resume from the same point. Also, if you wish to come out of the programming mode and operate the Robotic Arm manually, you can simple “OFF” the Programming Mode.

It will be difficult to clearly explain the operation of the Robotic Arm (in manual and automatic mode) here. So, I’ll make a video for the same.