How to Design an Arduino Nokia 5110 LCD Menu? 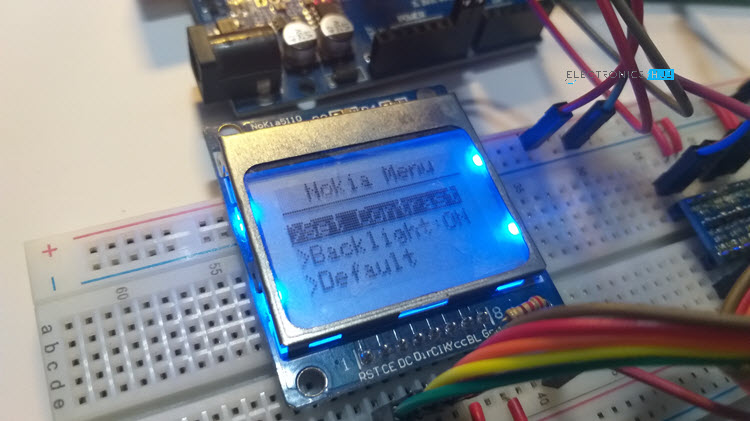 If you recall my previous Arduino project, I have implemented a basic hook-up guide to Nokia 5110 LCD with Arduino. That project was just to introduce the LCD Module and how to display some simple text using Arduino.

Since the Nokia 5110 LCD is a Graphical LCD Module where we can control its individual pixels, there is a lot more we can do than simply displaying some text. One thing we can do is display an image in the form of bitmap.

But if you truly want to extract the best of the 84×48 resolution of the Nokia 5110 LCD, then designing a Graphical User Interface to interact with Arduino (or any other microcontroller) is a great option.

So, let us design a simple Nokia 5110 Menu system, which we can control using 3 push buttons and interact with Arduino in a more intuitive way.

The aim of this project is to display a simple menu on the Nokia 5110 LCD and navigate through the menu items using three push buttons.

I have already discussed the important information about Nokia 5110 LCD and how to interface it with Arduino in my previous tutorial. So, I will not repeat all those steps again but rather focus this tutorial on the design of Arduino Nokia 5110 LCD Menu Interface. 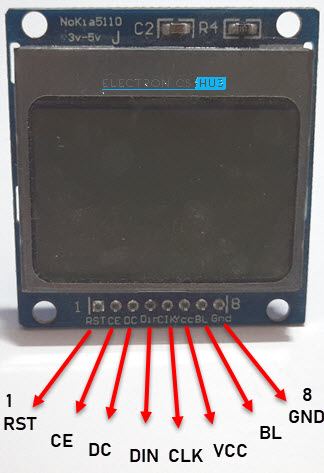 For example, you are designing a simple remote monitoring system to check whether the light is turned ON or OFF. If we design the system in such a way that the status of the light (which might be located far away) is displayed on a screen near us, then the job becomes very easy.

The aim of this Arduino Nokia 5110 Menu Interface tutorial is to give an overview of how easy it is to design our own GUI system using Arduino, Nokia 5110 LCD and three Push Buttons.

We will display a “menu” on the Nokia 5110 LCD and navigate through it using the push buttons. Using this setup, we can interact with Arduino through the Nokia 5110 Menu and control different parameters (like backlight of the LCD and contrast of the display).

The hardware connections are similar to the basic interface of Arduino and Nokia 5110 LCD. But to accommodate the push buttons and the backlight control, I have slightly modified the connections (or rather the pins of Arduino, to be precise).

As you can see from the above table, instead of connecting the BL (backlight) pin of the LCD to 3.3V (or 5V), I have connected it to Digital IO pin 7 of Arduino (through a 220Ω current limiting resistor). This allows us to control the Backlight of the display as we need.

Additionally, we need three push buttons for implementing “up”, “down” and “select” functionalities. One end of the buttons is connected to GND while the other terminals are connected to Digital IO pins 4, 2 and 3 respectively.

I have an IO board that consists of bunch of Push Buttons and LED. The push buttons on the board are pulled HIGH using 10KΩ pull-up resistors. What this means is that the Arduino pins to which the buttons are connected are externally pulled HIGH. So, I don’t need to do anything in the code.

If you are not using any external pull-up resistors with the push buttons, then you have to use the internal pull-up feature in the code.

The design of the Nokia 5110 Menu System is very simple. Initially, the LCD displays a main menu page (let us call this page 1) with a Title on the top followed by three menu items. 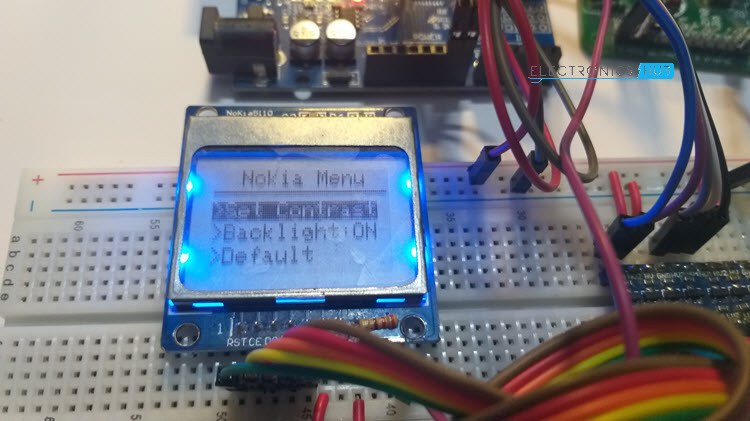 I have given the title as “Nokia Menu” and the three menu items are “Set Contrast”, “Backlight” and “Default”. The menu items are given numbers 1, 2 and 3 respectively (internally in the code). By default, the first menu item will be highlighted on system reset (or boot up).

We can navigate through the menu using three push buttons which are appropriately named as up, down and select. So, if we are in page 1 and if menu item 1 is currently highlighted, then we can highlight (or navigate to) other menu items by pressing the up or down buttons.

If you reach the extremes i.e., either menu item 1 or 3 and press up or down, then the menu items will be circled (or looped) back. For example, if menu item 1 is currently highlighted and if you press the up button, then menu item 3 will be highlighted.

Similarly, if menu item 3 is currently highlighted and if you press the down button, then menu item 1 will be highlighted.

Now, let us see how to set different values. Assume you are currently in page 1 and menu item 1 (Set Contrast) is highlighted. If you press the “Select” button, then page 2 will be activated. This page is dedicated to adjust the contrast of the display. 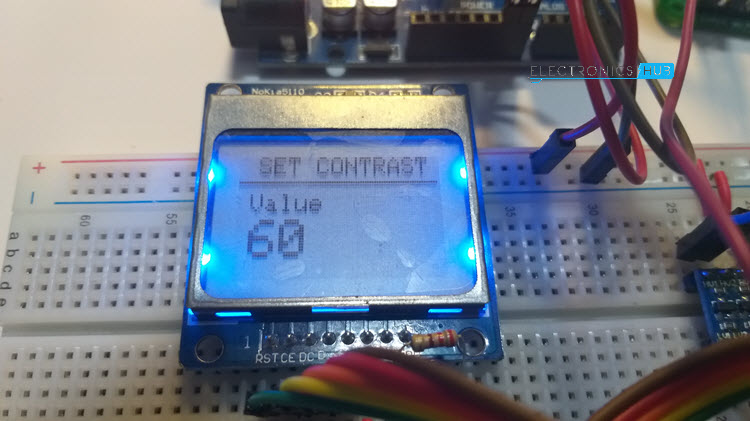 You can turn the back light of the Nokia 5110 LCD ON or OFF using the menu item 2 (Backlight). By default, the backlight is turned ON. In page 1, highlight the menu item 2 either by pressing up or down buttons. 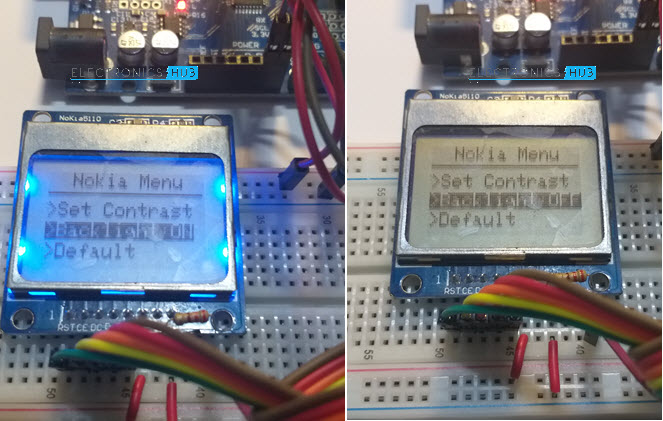 The third menu item is called “Default”. This option will restore the default values i.e., the display contrast is set to “60” and the backlight is turned ON. 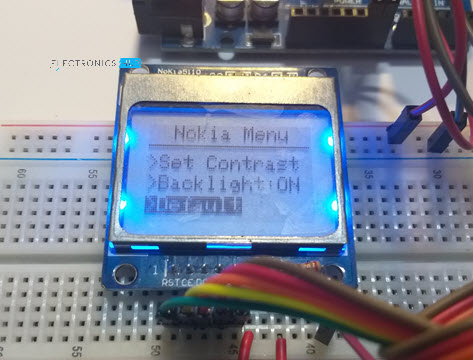 If you have followed the previous tutorial for downloading libraries, then no need to go through those steps again. But let me explain them once again. To interface the Nokia 5110 LCD module with Arduino, you need to download a couple of libraries.

Following is the code for displaying a menu on the Nokia 5110 LCD.

A tutorial on designing a simple GUI (Graphical User Interface) system with the help of the Arduino based Nokia 5110 Menu Display is implemented in this project.

It is a very small design but you can expand the idea into a full-blown GUI system. Additionally, instead of using push buttons, you can use a rotary encoder module, which makes things much more interesting.