In this LED based project, I will show you how to design an Up Down Fading LED Circuit using very simple hardware. Nowadays, the usage of LED lights is increasing rapidly because of their reduced cost and long durability (of course their low power consumption).

One such important application is where the LED lights increase and decrease their intensity depending on the number of persons entering or leaving at a particular place or a room.

This concept is called Fading of LEDs. Here is a simple circuit where an LED slowly fades out when it is applied with some voltage. 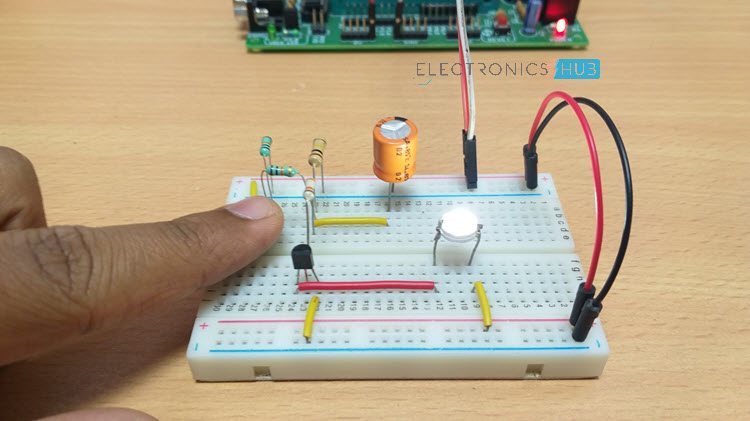 In this circuit, LED conducts only when the negative terminal is grounded as the positive terminal is applied with some voltage. When the button is pressed, the capacitor starts charging and discharging which causes the LED to fade up and down.

Also get an idea about how to make LED Christmas lights blink.

Switch is then connected to a resistor of resistance 100KΩ, which is responsible for charging the 220μF Capacitor. Another resistor of 39KΩ is connected before the transistor, through which the Capacitor discharges.

A 100KΩ Resistor is connected in parallel to the capacitor so that majority of the charge is discharged through the 39KΩ Resistor.

Transistor used here is a NPN transistor of series BC548. This NPN transistor is initially in off state i.e. it will not conduct. Voltage from emitter to collector flows, only if the base region is applied with some voltage. The minimum voltage required at the base of the transistor is 0.7V.

When this voltage is applied, transistor starts conducting and voltage starts flow from emitter to collector. You may get more knowledge on NPN Transistor by reading the post – Transistor Biasing and Characteristics

A PN Junction Diode like 1N4007 can be placed between the 100KΩ Resistor and the capacitor so that when discharging, the capacitor charge flows only through the other resistors. 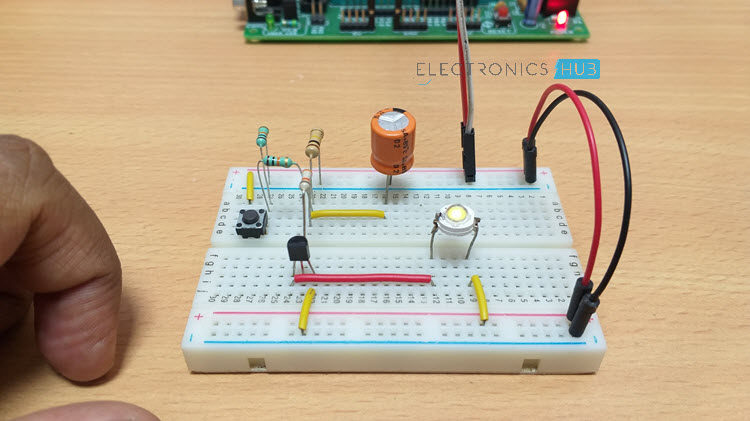 How to Operate Up Down Fading LED Lights Circuit?

Applications of Up Down Fading LED Lights Circuit

Limitations of the Circuit