In this tutorial, we will learn about some of the basics of TRIAC. In the process, we will understand the structure, symbol, working, characteristics, applications of TRIAC.

As we know that the SCR as a unidirectional device and has a reverse blocking characteristics that prevents the current flow in reverse biased condition. But for many applications, bidirectional control of current is required, particularly in AC circuits. To achieve this with SCRs, two SCRs must be connected in anti-parallel to control over both positive and negative half cycles of the input.

However, this structure can be replaced by special semiconductor device known as a TRIAC to accomplish the bidirectional control. The TRIAC is a bidirectional switching device that can control the AC power efficiently and accurately. These are often used in motor speed controllers, AC circuits, pressure control systems, light dimmers and other AC control equipments.

The triac is an important member of the thyristor family of devices. It is a bidirectional device that can pass the current in both forward and reverse biased conditions and hence it is an AC control device. The triac is equivalent to two back to back SCRs connected with one gate terminal as shown in figure.

TRIAC is an abbreviation for a TRIode AC switch. TRI means that the device consisting of three terminals and AC means that it controls the AC power or it can conduct in both directions of alternating current. 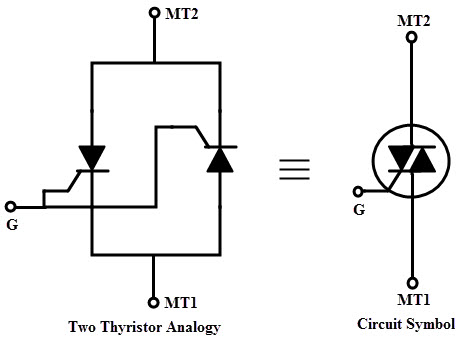 The above two conditions are achieved whenever the gate is triggered with an appropriate gate pulse. Similar to the SCR, triac is also turned by injecting appropriate current pulses into the gate terminal. Once it is turned ON, it looses its gate control over its conduction. So traic can be turned OFF by reducing the current to zero through the main terminals.

A triac is a five layer, three terminal semiconductor device. The terminals are marked as MT1, MT2 as anode and cathode terminals in case of SCR. And the gate is represented as G similar to the thyristor. The gate terminal is connected to both N4 and P2 regions by a metallic contact and it is near to the MT1 terminal. 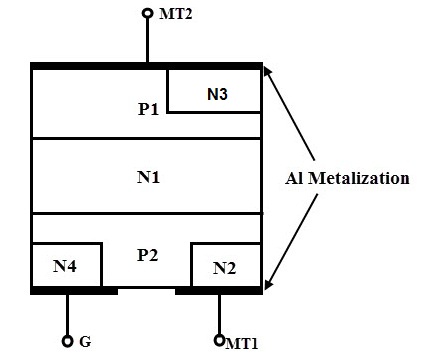 Until the voltage across the triac is less than the reverse breakover voltage, device operates in a reverse blocking mode. A traic can be made conductive by either positive or negative voltage at the gate terminal.

Working and Operation of TRIAC

It is possible to connect various combinations of negative and positive voltages to the triac terminals because it is a bidirectional device. The four possible electrode potential combinations which make the triac to operate four different operating quadrants or modes are given as.

When the gate terminal is made positive with respect to MT1, gate current flows through the P2 and N2 junction. When this current flows, the P2 layer is flooded with electrons and further these electrons are diffused to the edge of junction J2 (or P2-N1 junction).

This results a positive regeneration and finally the main current flows from MT2 to MT1 through the regions P1- N1 – P2 – N2. 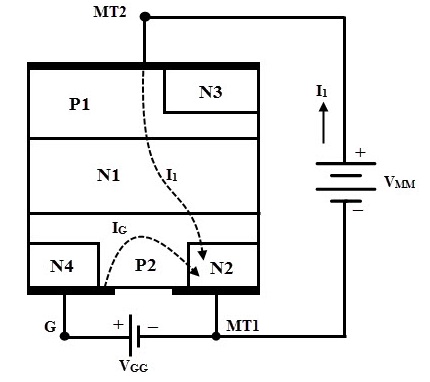 This further raises the potential between P2N2 towards the potential of MT2. This causes the current to establish from left to right in the P2 layer which forward biases the junction P2N2. And hence the main structure P1N1P2N2 begins to conduct. 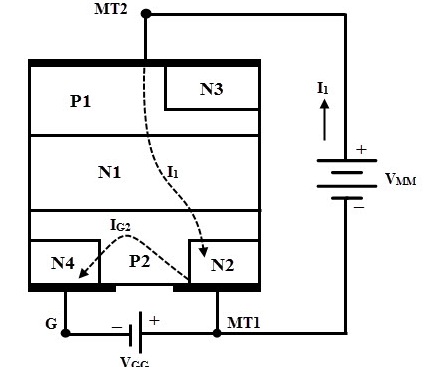 In this mode, MT2 is made negative with respect to MT1 and the device is turned ON by applying a positive voltage between the gate and MT1 terminal. The turn ON is initiated by N2 which acts as a remote gate control and the structure leads to turn ON the triac is P2N1P1N3.

The external gate current forward biases the junction P2-N2. N2 layer injects the electrons into the P2 layer which are then collected by junction P2N1. This result to increases the current flow through P2N1 junction. 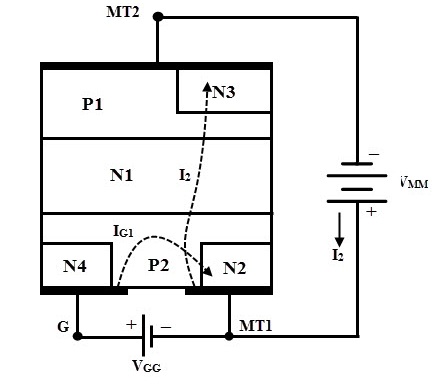 Hence, these electrons arrive at junction J2 and produce a negative space charge in the N1region which results to inject more holes from the P2 into the region N1. This regenerative process continues till the structure P2N1P1N3 turns ON the triac and conducts the external current.

As the triac is turned ON by the remote gate N2, the device is less sensitive to the positive gate current in this mode.

In this mode N4 acts as a remote gate and injects the electrons into the P2 region. The external gate current forward biases the junction P2N4. The electrons from the N4 region are collected by the P2N1 junction increase the current across P1N1 junction.

Hence the structure P2N1P1N3 turns ON by the regenerative action. The triac is more sensitive in this mode compared with positive gate current in mode 3. 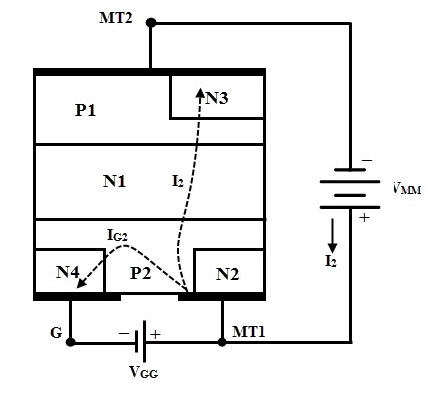 From the above discussion, it is concluded that the modes 2 and 3 are less sensitive configuration which needs more gate current to trigger the triac, whereas more common triggering modes of triac are 1 and 4 which have greater sensitivity. In practice the more sensitive mode of operation is selected such that the polarity of the gate is to match with the polarity of the terminal MT2.

However, it is also possible to turn ON the triac below the VBO by applying a gate pulse in such that the current through the device should be more than the latching current of the triac. 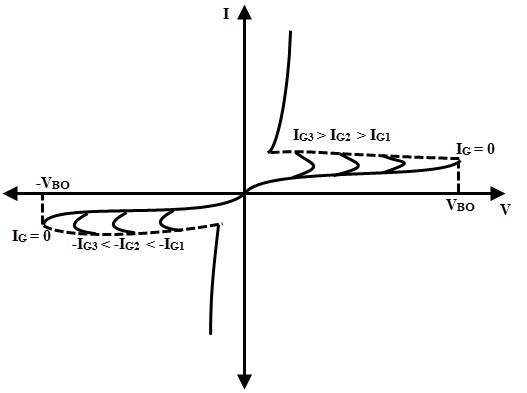 Similarly, when the terminal MT2 is made negative with respect to MT1, the traic is in reverse blocking mode. A small leakage current flows through the device until it is triggered by breakover voltage or gate triggering method. Hence the positive or negative pulse to the gate triggers the triac in both directions.

Due to the internal structure of the triac, the actual values of latching current, gate trigger current and holding current may be slightly different in different operating modes. Therefore, the ratings of the traics considerably lower than the thyristors.

Triac can be triggered by both positive and negative polarity voltages applied at the gate.

Due to the bidirectional control of AC, triacs are used as AC power controllers, fan controllers, heater controllers, triggering devices for SCRs, three position static switch, light dimmers, etc. Triac as a switch and phase control applications are discussed below.

Triac as a High Power Switch 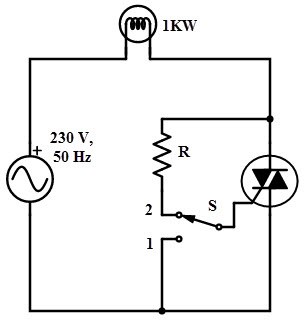 The figure below shows the use of triac for phase control method in order to produce the variable power to the load. Diodes D1 and D2 passes the current flow to the gate terminal in positive and negative half cycles respectively.

Therefore, the gate is triggered thereby triac comes into the conduction state. During the negative half cycle of the input, diode D2 is forward biased, hence the gate current flows through it thereby triac is turned ON.

Likewise, AC power delivered to the load is controlled in either direction by applying a proper gate signal. The conduction angle of the triac is controlled by varying the resistance R2 in the above circuit.