An Introduction to Sound Transducers

Sound is a generalized term given to acoustic waves which are a type of longitudinal waves that propagate by compression and decompression in adiabatic process. The frequency range of acoustic waves is between 1 Hz to tens of thousands of Hz. In this huge range, human can hear between 20 Hz to 20 K Hz.

Sound and vibration are interconnected as sound is associated with mechanical vibration. Many sounds are caused by vibration of solids or gases. According to ANSI, sound is defined as “oscillation in pressure, stress, etc., propagated in a medium with internal forces or superposition of such propagated oscillation.” Sound wave is the waveform caused by a vibration.

This waveform causes an identical vibration to be set up in any material affected by the sound wave. In order to transmit sound waves, a medium that can be vibrated is needed. A vibrating object or material compresses the surrounding air molecules and rarefies them. There is no transmission of sound waves through vacuum.

The velocity and wavelength of the sound are dependent on the medium that transmits the sound waves. The relationship among the three parameters velocity, wavelength and frequency is shown below.

The units of frequency are Hertz (Hz).

Objective measurement of sound waves makes use of intensity of receiving surface measured as the number of watts of sound energy per square meter. The ear has a non – linear response and the sensitivity vary with the frequency of sound.

The frequency range over which sound can be detected by the human ear is between 20 Hz to 20 kHz. The response of the ear is maximum in the region of 2 kHz.

What are Sound Transducers?

In the latter case, they are called as Output Sound Transducers and a Speaker is an example.

The audio or sound to electrical energy transducer is the microphone or simply called as mic. A microphone produces electrical analog signals that are proportional to the sound waves acting on its diaphragm. Microphones are classified by the type of electrical transducer they use. In addition to the transducer, microphone uses acoustic filters and passages whose shape and dimension modify the response of the overall system.

The type of sound transducer does not necessarily determine the operating principle as pressure or velocity, but the construction of the microphone is the most important factor.

The carbon microphone was the first type of microphone to be developed for usage in telephones. Now they are replaced by electret capacitor microphones. Carbon microphone uses granules of carbon held between a diaphragm and a backplate. 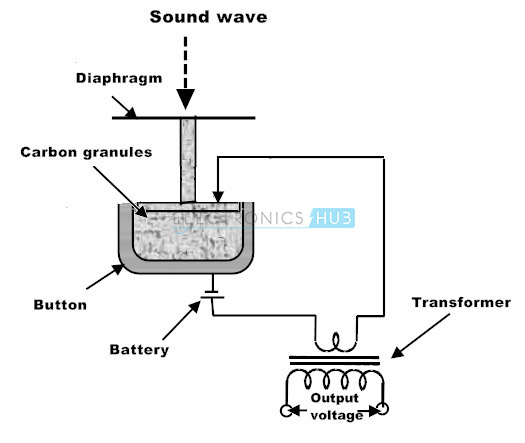 When the granules are compressed, the resistance between the diaphragm and the backplate drops considerably. The vibrations of the diaphragm, which are the result of the sound wave incident on it, can be converted into variations of resistance of granules. The microphone requires an external power supply as it does not generate voltage.

The main and only advantage of carbon microphone is that it produces an output that is huge by microphone standards.

The disadvantages include poor linearity, poor structure that causes multiple resonances in the audio range and high noise level as the resistance of the granules alter even in the absence of sound.

Moving coil (Dynamic) microphones use a constant flux magnetic circuit. In this circuit, the electrical output is generated by moving a coil of wire in the circuit which is attached to a diaphragm. This whole arrangement is in capsule form which makes this a pressure operated microphone rather than velocity operated.

The coil moves in response to movement of the diaphragm as the sound waves hit the diaphragm. By applying Faraday’s Law of Electromagnetic Induction, a voltage is induced in the coil due to the movement of the coil in the magnetic field. Maximum output occurs when the coil reaches maximum velocity between the peaks of sound wave so the output is 900 out of phase with the sound.

The internal view of a Dynamic Microphone is shown below. 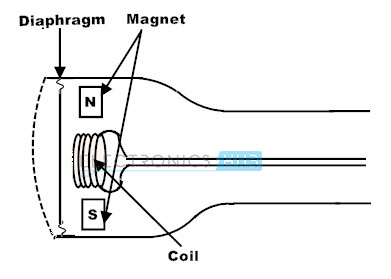 The range of the movement of the coil is very small as the size of the coil is small. Hence the linearity of moving coil type microphones is excellent. Due to the low impedance of the coil, the output is considerably low and hence amplification of the signal is required.

The principle of operation of a ribbon microphone is derived from moving coil microphone and the change is that the coil has been reduced to a strip of conducting ribbon. The signal is taken from the ends of the ribbon.

An intense magnetic field is used so that the movement of the ribbon cut across the maximum possible magnetic flux is possible. This generates an output with its peak value at 900 out of phase to the sound wave.

The internal view of ribbon microphone is shown below. 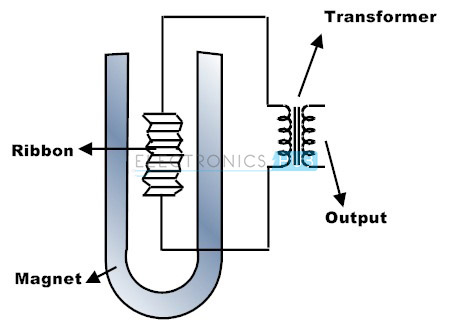 The advantage of Piezoelectric Microphone over other type of microphones is that it is not confined to use in air but can be bonded to solid and also immersed in a non – conducting liquid. Piezoelectric transducers can be used at ultrasonic frequencies and some are used in the high MHz region.

The output voltage and impedance are high, but the linearity is poor. Now a day, synthetic crystals are used over natural crystals. Barium Titanate is the synthetic crystal used for frequencies up to hundreds of KHz.

The figure of piezoelectric microphone is shown below. 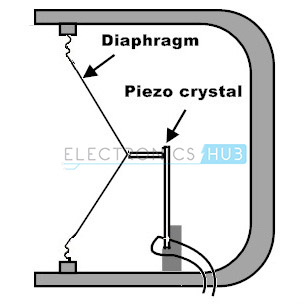 Capacitor microphone consists of two surfaces: one is a conductive diaphragm and other is a backplate and the electric charge between the two surfaces is fixed. When the sound wave hits the diaphragm, the vibrations cause a variation in capacitance.

The structure of a capacitor microphone is shown below. 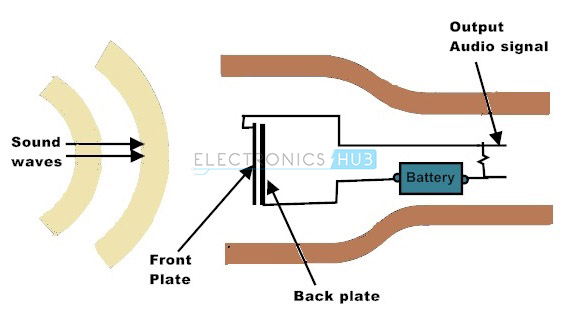 To avoid polarizing voltage, an electret is used. An electret is an insulating material with permanent charge. It is electrostatic equivalent of a magnet. In electret capacitor microphones, one of the plates of the capacitor is a slab of electret and the other is a diaphragm. As the electret provides a fixed charge, there is no need for voltage supply.

The use of microphone is little unless there is a transducer for opposite direction. The transducers like speakers, buzzers and horns are output sound actuators that can produce sound from an input electrical signal. The function of a sound actuator is to convert electrical signals into sound waves with a close resemblance to the original input signal to a microphone.

Earphones are one of the simpler output sound transducers which have been used long before than microphones were. Earphones were used with a Morse Key machine in electric telegraphs. After the development of microphones, the combination of input and output sound transducers leads to a numerous inventions including telephone. The task of an earphone is simple and as it is placed near the ear, the power requirements are also very less, generally in the order of few milliwatts.

Since the required output is less, earphone uses a small diaphragm. A loudspeaker, unlike earphone, is not pressed against the ear, but rather the sound waves are launched into space. Hence the construction, principle and power requirement of a loudspeaker are a little bit different.

Loudspeakers are available in a variety of sizes, shapes and frequency ranges. The transducer of a loudspeaker system is called as Pressure Unit as it transforms complex electrical signals into air pressure. In order to achieve this, a loudspeaker unit consists of a motor unit which transforms input electrical waves into vibrations and a diaphragm that moves sufficient air in order to make the vibrating effect audible.

For each type of microphone, there is a corresponding loudspeaker. Some of the common types of speakers are: moving iron, moving coil, piezoelectric, isodynamic and electrostatic.

It consists of a coil of fine wire called the voice coil that is suspended in a very strong magnetic field. This coil is attached to a diaphragm like paper or Mylar cone. The diaphragm is suspended on its edges to a metal frame.

The internal structure of a moving coil loudspeaker is shown below. 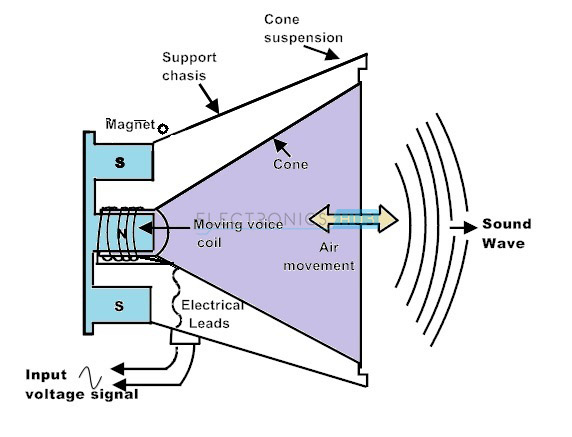 This causes the coil to move in one direction or the other determined by the interactions between north and south poles. The diaphragm, which is attached to the coil, moves in tandem with the coil and this causes a disturbance in the air around it. These disturbances produce a sound. The loudness of the sound is determined by the velocity at which the cone or diaphragm moves.

The range of frequencies which human ear can hear is between 20 Hz to 20 KHz. Modern loudspeakers, headphones, earphones and other audio transducers are tailored to operate in this frequency range.

The generalized frequency ranges and their terminology are mentioned below.

In multi speaker Hi – Fi systems, there are separate woofer, mid – range and tweeter speakers with an active or passive crossover network to accurately split and reproduce the audio signal by all sub – speakers.

A simple circuit to drive a speaker is shown below. 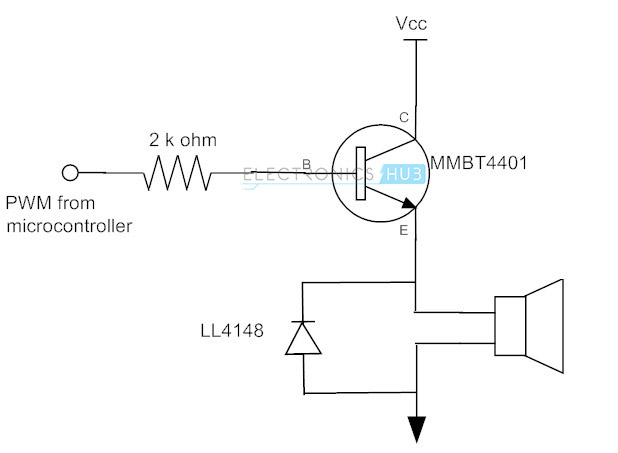 A multi speaker design is shown below.

There are three types of drivers: woofer driver, mid – range driver and tweeter driver. A simple audio amplifier circuit is shown below. 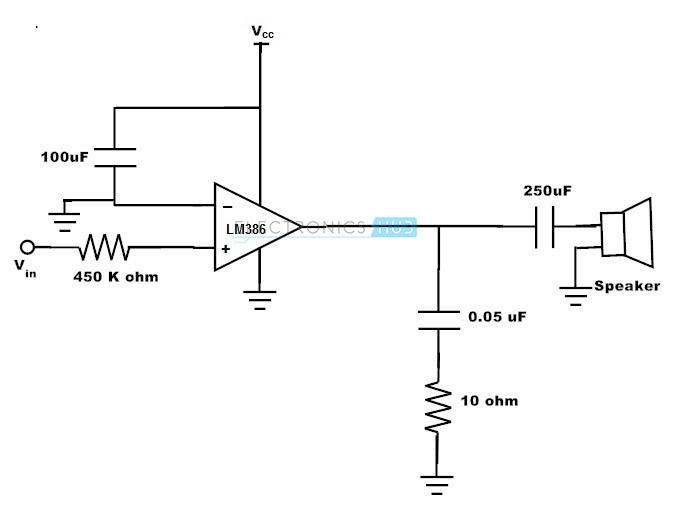 Based on the filter circuit used, the amplifier can be used to drive a woofer or mid – range or tweeter speaker.

Some of the other types of output transducers are mentioned below.

Generally, tweeters are manufactured using piezoelectric principle. The diaphragms are made of piezoelectric plastic sheets. When a voltage is applied between the faces of the diaphragm, it shrinks and expands according to the signal. By shaping the diaphragm as a part of the surface of a sphere, the shrinking and expanding can be converted into movement that will move the air.

GO TO FIRST – SENSORS AND TRANSDUCERS