Introduction to Sensors and Transducers

We live in an Analog World with Digital means of communication and control Mechanical objects with Electrical signals. This is possible because of devices like sensors and transducers, which help us in converting data or information from one domain to other.

Measurement is an important subsystem in any major system, whether it may be a mechanical system or an electronic system. A measurement system consists of sensors, actuators, transducers and signal processing devices. The use of these elements and devices is not limited to measuring systems.

These are also used in the systems which perform specific tasks, to communicate with the real world. The communication can be anything like reading the status of a signal from a switch or to trigger a particular output to light up an LED.

The words sensors and transducers are widely used in association with measurement systems. The sensor is an element that produces signals relating to the quantity that is being measured. According to Instrument Society of America, “a sensor is a device that provides usable output in response to a specified quantity which is measured.” The word sensor is derived from the original meaning ‘to perceive.’

In simple terms, a sensor is a device that detects changes and events in a physical stimulus and provides a corresponding output signal that can be measured and/or recorded. Here, the output signal can be any measurable signal and is generally an electrical quantity.

Sensors are devices that perform input function in a system as they ‘sense’ the changes in a quantity. The best example of a sensor is mercury thermometer. Here the quantity that is being measured is heat or temperature. The measured temperature is converted to a readable value on the calibrated glass tube, based on the expansion and contraction of liquid mercury.

Transducers are the devices that convert energy in one form into another form. Generally the energy is in the form of a signal. Transducer is a term collectively used for both sensors and actuators.

Criteria to Choose a Sensor

The following are certain features that are considered when choosing a sensor.

Basic Requirements of a Sensor or Transducer

The basic requirements of a sensor are:

The scheme of classifying sensors can range from very simple to very complex. The stimulus that is being sensed is an important factor in this classification.

Some of the stimuli are

Based on the applications of sensors, their classification can be made as follows.

I. Displacement, Position and Proximity Sensors

All the sensors can be classified into two types based on the power or signal requirement. They are Active sensors and passive sensors.

In order to operate active sensors, require power signal from an external source. This signal is called an excitation signal, and based on this excitation signal the sensor produces output. Strain gauge is an example of active sensor. It is a pressure sensitive resistive bridge network and doesn’t produce the output electrical signal on its own. The amount of force applied can be measured by relating it to the resistance of the network. The resistance can be measured by passing current through it. Current acts as the excitation signal.

A public addressing system is an example of a system using sensors and actuators.

The actuator or the device with output function is loudspeaker. It receives the amplified electrical signals from the amplifier and converts them back into sound signals but with more reach.

An analogue sensor produces continuously varying output signals over a range of values. Usually the output signal is voltage and this output signal is proportional to the measurand. The quantity that is being measured like speed, temperature, pressure, strain, etc. are all continuous in nature and hence they are analogue quantities.

A Cadmium Sulfide Cell (CdS Cell) which is used to measure the intensity of light is an analogue sensor. The resistance of a CdS cell varies according to the intensity of the light incident on it. When connected to a voltage divider network, the change in resistance can be observed through varying output voltage. In this circuit, the output can vary from anywhere between 0 V to 5 V. 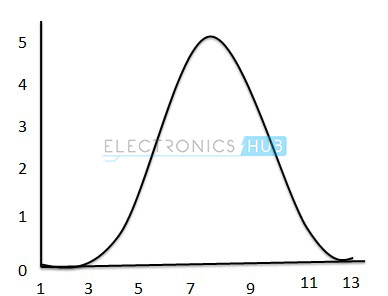 A thermocouple or a thermometer is an analog sensor. The following setup is used to measure the temperature of the liquid in the container using a thermocouple.

The output signal of the above setup can be depicted as follows: 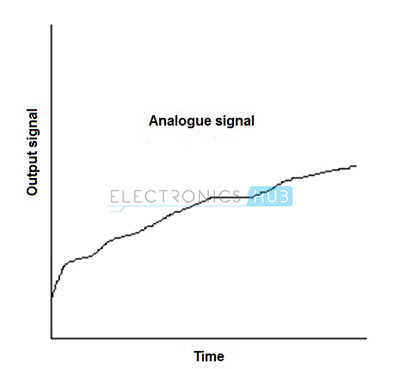 The output of an analogue sensor tends to change smoothly and continuously over time. Hence the response time and accuracy of circuits employing analogue sensors is slow and less. In order to use these signals in a microcontroller based system, Analog to Digital converters can be used.

The following setup uses a light sensor to measure the speed and produces a digital signal. 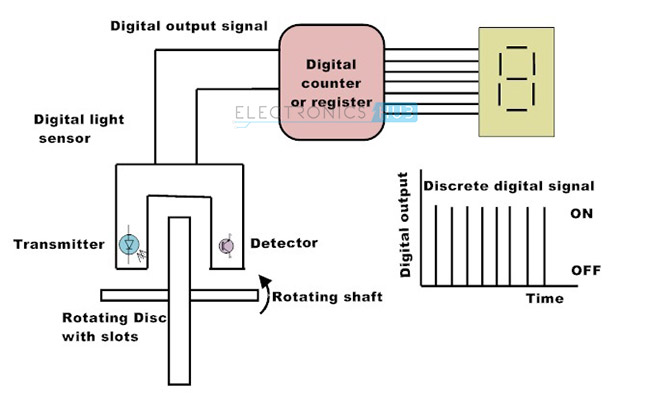 In the above setup, the rotating disc is connected to the shaft of a motor and has number of transparent slots. The light sensor captures the presence or absence of the light and sends logic 1 or logic 0 signal accordingly to the counter. The counter displays the speed of the disc. The accuracy can be increased by increasing the transparent slots on the disc as it allows more counts over the same amount of time.