In this tutorial, we will have a basic introduction to Seven Segment Displays or 7-Segment Displays. They are commonly used to display digits from 0 to 9 and also few alphabets (usually, A to F).

The binary information can be displayed in the form of decimal using this seven segment display. Its wide range of applications is in microwave ovens, calculators, washing machines, radios, digital clocks etc.

Liquid crystal displays (LCD) use the properties of liquid crystal for displaying. LCD will not emit the light directly . These LED’s or LCD are used to display the required numeral or alphabet. Single seven segment or number of segments arranged in an order meets our requirements.

Later in 1970’s, with the advent of LEDs usage of seven segment displays increased to a large extent.

These are available from different vendors .They have shape of rectangular box similar to that of IC but in large size.

From top view 8 segments can be seen (7 display segments and one decimal point) in the form of numeral ‘8’. 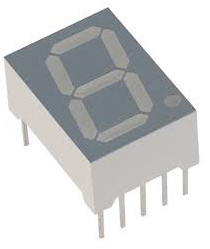 Here, the 7 LED’s called segments are assigned with   an alphabet from A to G. Forward biasing the particular segment or LED will emit the light energy thus illuminating a part of numeral. There is another segment assigned as H, used for displaying dot. 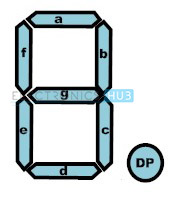 Generally, in LED package either all the cathodes or all anodes of the segments are combined to form a common pin. Thus each seven segment display will have seven pins used for displaying the digits, one common pin and another pin for decimal/dot point 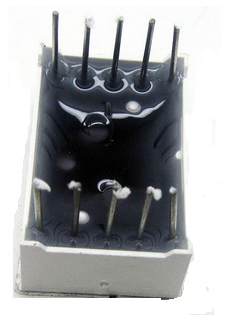 Seven segment display works, by glowing the required respective LEDS in the numeral. The display is controlled using pins that are left freely. Forward biasing of these pins in a sequence will display the particular numeral or alphabet. Depending on the type of seven segment the segment pins are applied with logic high or logic zero and in the similar way to the common pins also. 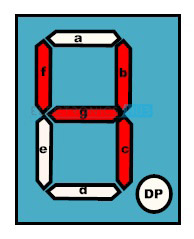 Depending on either the common pin is anode or cathode, seven segments are divided into following types.

The following are the types of seven segments. 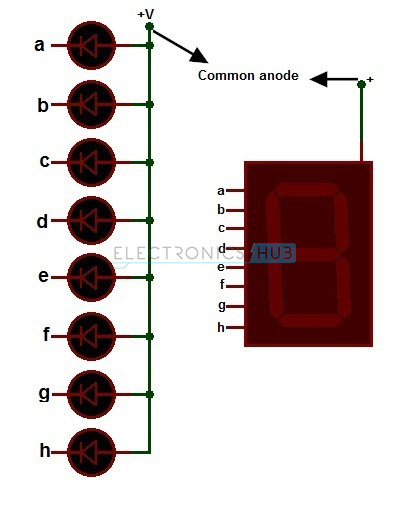 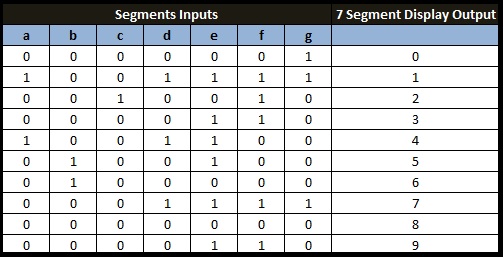 In order to display zero on this segment one should enable logic high on a, b, c, d, e and f segments and logic low on segment ‘g’. Thus, the above table provides data on seven segments for displaying numerals from 0-9.

As the name indicates cathode is the common pin for this type of seven segments and remaining 8 pins are left free. Here, logic low is applied to the common pin and logic high to the remaining pins. 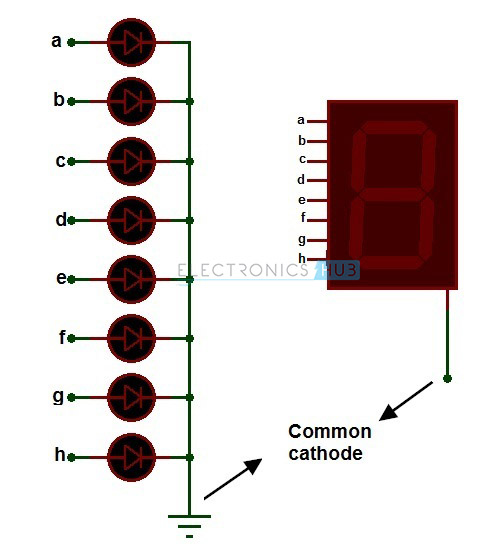 Truth Table: The truth table of seven segment display is shown below. 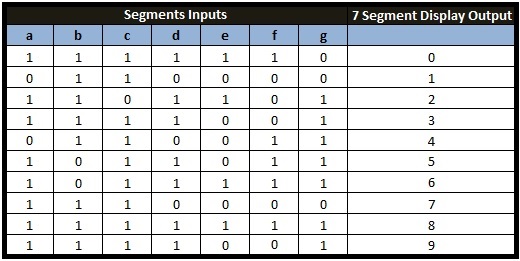 A seven segment display can be driven using resistors, transistors and IC’s. But mostly the driving is done by the integrated circuits because of their ease co-operation.

Driving a seven segment using resistor is the most common method. In this, generally we use the resistor as the driving element. Generally, LED requires 20 milli Amps of current. Current more than this value may damage the LED. To limit this current a resistor is used .This is called current limiting resistor. Circuit is as shown below. 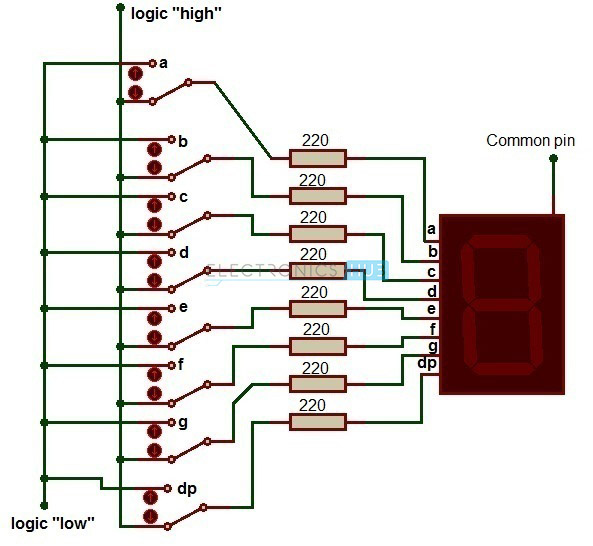 Segment pins of the seven segment are connected using a resistor and a switch. The 8 switches are connected to the 8 current limiting resistors and they are connected to a to g segments of display. Let us see how this circuit drives the digital display.

To glow the segment ‘a’, close the switch ‘a’. The current passes through resistor and some drop occurs at current limiting resistor. Thus, the sufficient current passes to the LED. Suppose to display digit 7 switches a, b, c are closed. But the disadvantage here is, illuminating all the LEDs at a time reduces the current. 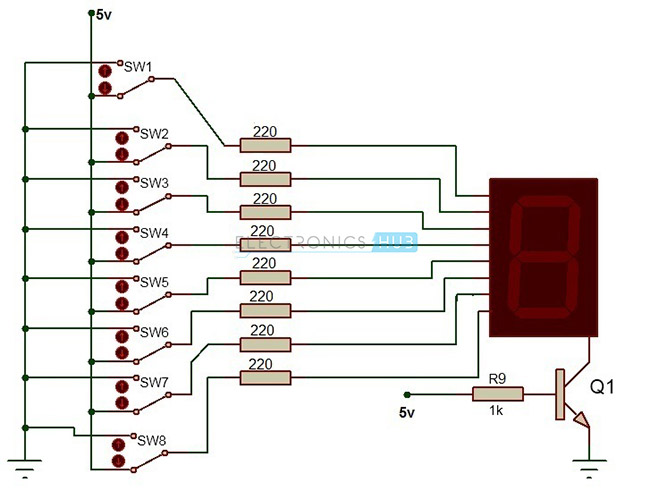 The decoder decodes the applied BCD input and sends the appropriate output to the segments. The decoder outputs are connected to the seven segment inputs through the resistors. These resistors are used to limit the current.