What is Alternating Current??

Can you imagine your life without electricity? If there is no electricity there will be no progress in our lives. In this tutorial we will learn about what is an alternating current ? Let us first learn how and when electric current came into existence.

Electricity is not invented , it exists in nature in the form of energy . Many experiments were conducted on electricity. Benjamin Franklin dangerous kite experiment proved that lightning is electricity. Nikola Tesla and Thomas Edison invented A.C. current and D.C. current receptively. And these scientists battled over the standardisation of the current notation.Finally the alternating current won the battle and came into existence. 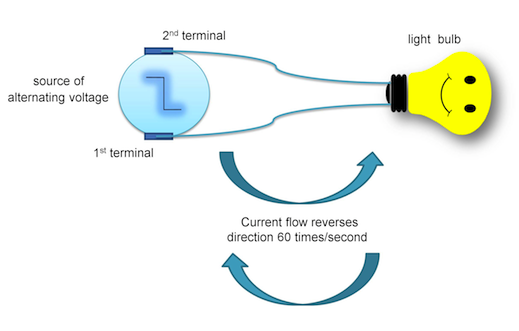 This alternating current is invented by a famous scientist “Nicholas Tesla”, after pointing out the inefficiencies of Thomas Alva Edison’s DC power houses.

What  is Alternating Current??

Number of times this current changes its direction in one second can be defined as the frequency of the alternating current. 50Hz frequency means it changes it  direction for 50 times in a second.

In this current, the charged particles move from zero to maximum value in a direction and fall to zero and goes for another cycle in the opposite direction with the same values (in negative) . The values processed by AC current in both the directions are equal at all instances.

It has both magnitude, direction and it varies in accordance with time. AC will flow in both positive and negative directions and hence it is Bi-directional. Generally AC waveform is represented by Sinusoidal waveform and its mathematical formula is

A is magnitude of signal

t is the time period

f is the frequency of signal 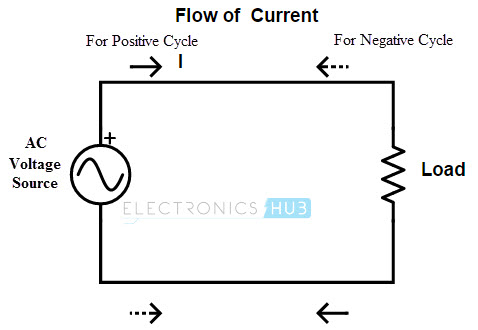 An AC generator works depending upon the principle of Faraday’s electromagnetic induction to convert mechanical energy (such as rotation) into electrical energy.

A simple generator consists of two permanent magnets. They will produce a fixed magnetic field between north & south poles. In this magnetic field, there will be a single rectangular loop of wire which is an important part of the alternator.

The alternating current can be represented by a waveform, with its amplitude and time period. There are many wave forms with which we can represent the AC current like square wave or triangular wave, but the easiest is to represent it with a sine wave. 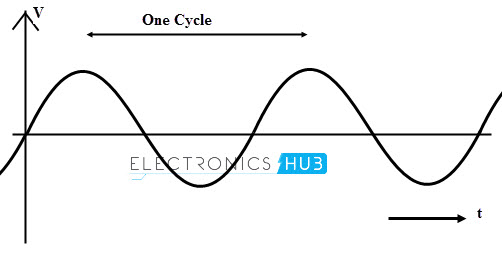 The general purpose electric power supplied to households is called Mains electricity. The current in this supply is alternating current. The supply which is connected from the transformer power lines (Step up or step down) to the domestic power lines is called “Main supply or Line supply”. The main supply we use for home purpose in India is 220-240 volts with 50Hz frequency whereas in the US (United States) it is 120 volts with 60Hz frequency. The manufacturers of electrical equipment will design their products according to the Mains supply so that it will work for the required range of voltage and frequency.

Advantages of AC over DC