How to Program Raspberry Pi Pico with Visual Studio Code?

In this tutorial, we will learn how to Program Raspberry Pi Pico with Visual Studio Code. Visual Studio Code or simply VS Code is a great IDE for software development. We will see how to install VS Code on Raspberry Pi (the host computer) and in a later tutorial we will see the same for a Windows system (including installation of all the other necessary tools).

But if you want to implement a bigger project, using terminal to write and maintain the code becomes tedious (at least for beginners). This is where the like of VS Code and Eclipse IDEs come into play.

VS Code or Visual Studio Code is a code editing software developed by Microsoft. It is available for all the three major OS platforms: Windows, Linux and Mac. In addition to the basic functionality of code editor, VS Code also has several important features like Debugging, highlighting syntax, support for plugins etc.

First, we will see all the step for installing Visual Studio Code on our Raspberry Pi host computer. Then, we will shift our focus to a Windows System, where we need to download (and install) a whole lot of tools before installing VS Code. So, let’s get started.

This is because, I discussed all the necessary tools that you have to install in your Raspberry Pi in order to program Pico with C Programming Language.

All the following steps assume that you have already installed the necessary toolchains as mentioned in the previous tutorials.

Open the downloads folder in the Raspberry Pi and double click on the downloaded .deb file to begin the installation of VS Code.

Before launching VS Code, you have to install three extension for Visual Studio Code. Use the following commands to install these extensions one after the other. 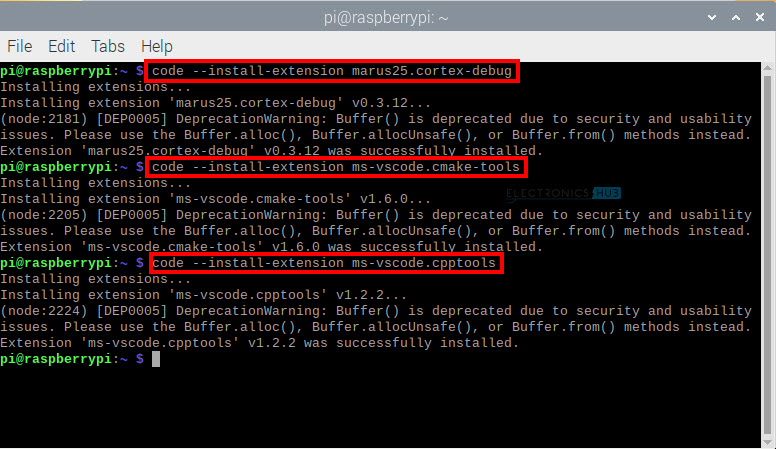 After installing these extensions, you can launch Visual Studio Code using the command ‘code’ in the terminal. But before that, make sure that you set the path for ‘pico-sdk’.

The VS Code IDE will now start and opens its home page. 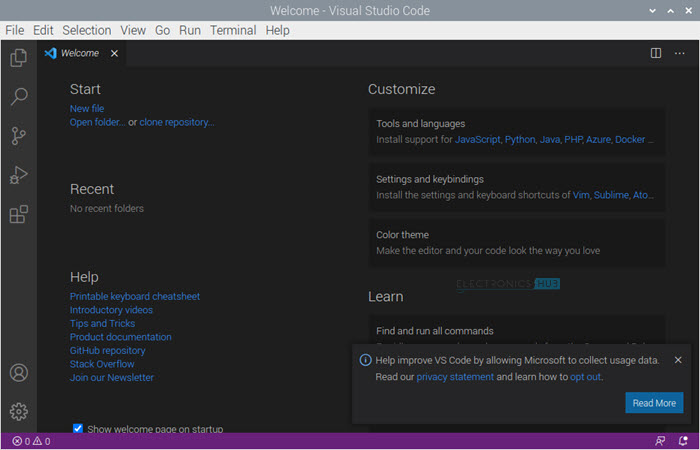 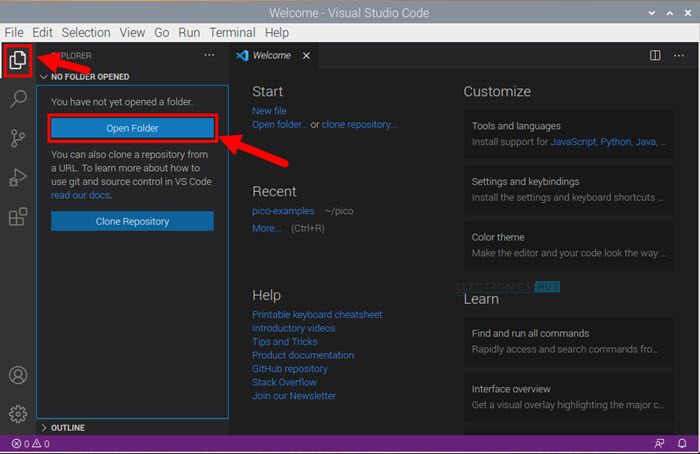 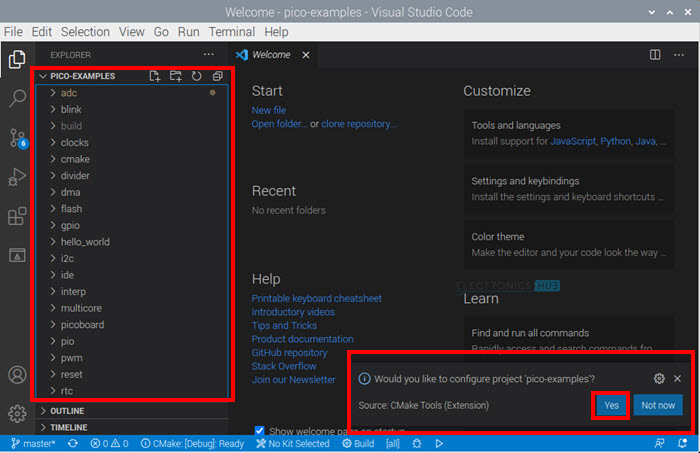 If you missed this option, there will be a No Kit Selected option at the bottom Blue coloured Status Bar. Click on that. Then select ‘GCC for arm-none-eabi’ option. 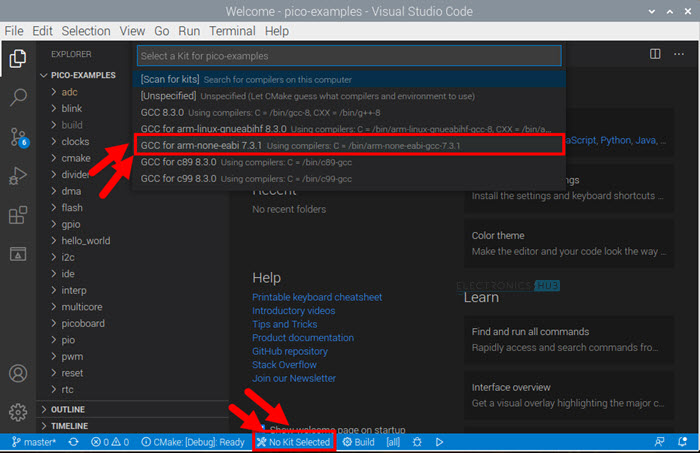 Now, you can build the projects. Again, at the bottom status bar click on ‘Build’ option. Next to this ‘Build’ option, you can select the specific project by clicking on [all] or all the projects will be built. I selected the ‘Blink’ project to demonstrate the working.

In the status bar, there is an option to configure CMake to build for ‘Debug’ or ‘Release’ mode. By default, ‘Debug’ option is selected. 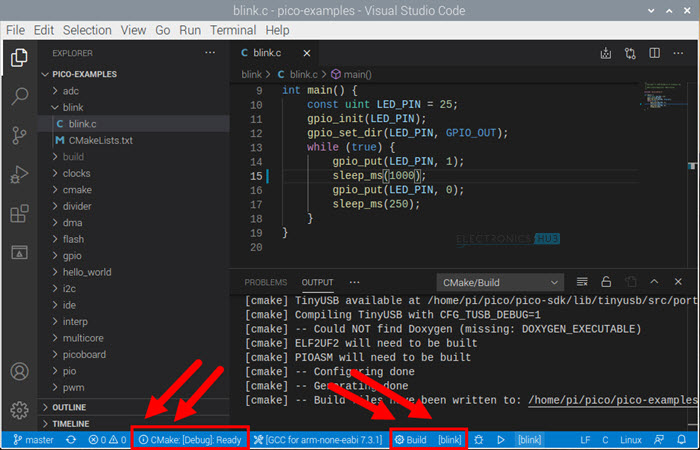 Uploading and Debugging with VS Code

There is a .json file provided by Visual Studio Code called ‘launch.json’, which will help us in uploading the code to Raspberry Pi Pico and also debugging the code. Additionally, there is a ‘settings.json’ file, which will configure CMake extension to work properly.

Now, copy the ‘launch.json’ and ‘settings.json’ files into this directory.

To upload and debug the code, go to Debug Tool bar by pressing “Ctrl+Shift+D”. A ‘Run and Debug’ option will pop-up at the top. Press the green play button to build the code, upload the code to Raspberry Pi Pico and start debugging session. 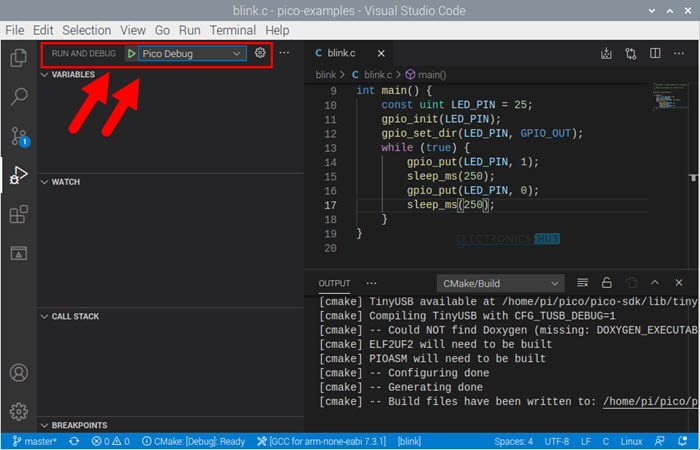 Additional Debug Control options will appear on the top. Press the Blue play button to start the code (continue option in OpenOCD). 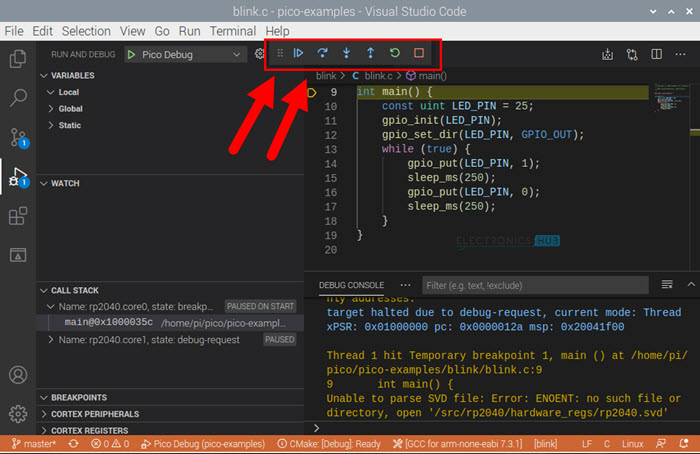 You can set breakpoints anywhere you want and check if your code is reaching those breakpoints.

In a later tutorial, I will show the steps you need to follow to install Visual Studio Code in a Windows System. This is a little bit different as you have install several tools individually instead of running a simple command (like we did in the Raspberry Pi).