Operational amplifiers, along with linear circuits, are also vastly used to configure non-linear circuits, i.e. circuits whose output exhibits non-linear change with respect to the change in the input. These circuits are commonly known as switching circuits, whose output switches between positive and negative saturation voltage levels. Most popularly used circuit configurations are zero crossing detectors, the Schmitt trigger, astable and monostable multivibrators.

A zero crossing detector is the simplest circuit configurations of op-amp switching circuits. In this configuration, the input signal is applied to one of the input terminals while the other input is connected to ground. This circuit needs no feedback connection.

A Zero Crossing detector circuit with a feedback connection, usually positive, constitutes the Schmitt trigger. The Schmitt trigger circuit has definite predefined upper and lower input voltage levels that trigger the output to switch from one saturation level to the other. 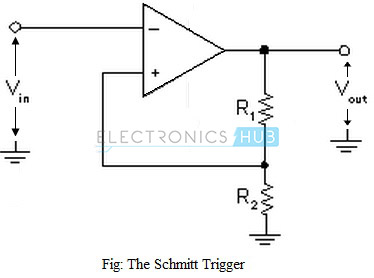 The upper and lower trigger points (threshold voltages) can be mathematically obtained by using the relation,

Above equations indicate that by appropriately choosing the values of resistor R1 & R2, the upper and lower threshold levels can be adjusted and controlled accurately.

The circuit diagram of an astable multivibrator using operational amplifier is as shown in the figure below. The circuit is a Schmitt trigger configuration, which has a feedback connection and includes an input capacitor at the inverting input terminal. 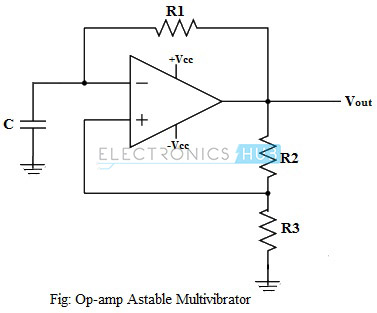 It can be noted that the circuit is a square wave generator whose output swings between the op-amp positive and negative saturation voltage levels. The frequency of the output square wave depends on the capacitance C and the feedback resistor value, R1.

The output and the capacitor voltage waveforms of an astable multivibrator are shown in the figure below.

The same circuit configuration can be used to generate square waves of adjustable frequency over a range, by including a potentiometer in series between R2 and R3. By adjusting the resistance value of the potentiometer, the frequency of the output square wave can be varied.

A monostable multivibrator, like the name suggests, is a circuit that has one stable output state. Its normal output voltage may be high or low, and it stays in that state until triggered. When a triggering pulse is applied, the output switches to the opposite state for a time that is dependent on the RC components of the circuit. 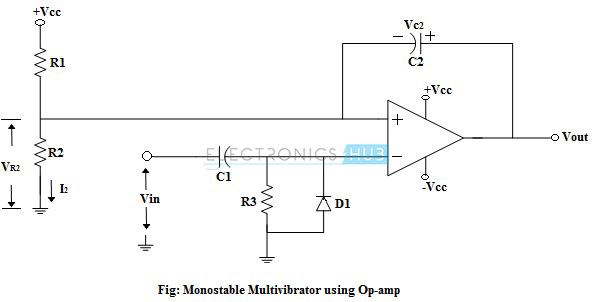 The circuit of a typical monostable multivibrator using an op-amp is as shown in the figure above. The inverting input terminal of the op-amp is grounded through resistor R3 and the non-inverting input terminal is biased positively by resistors R1 and R2. This causes the output to be at its positive saturation level normally, and the capacitor C2 gets charged with the polarity as shown.

When the output is at its negative saturation level, the capacitor C2 starts discharging via resistors R1 and R2, gradually raising the non-inverting input voltage to ground level. When the non-inverting input voltage raises slightly above ground level, the output of the op-amp switches to its positive saturation level immediately, and the circuit is returned to its original state. The pulse width of the output wave depends on the capacitance C2 and the bias voltage VR2, and also on the resistances R1 and R2.

The input and the output waveforms of a monostable multivibrator are shown in the above figure.