Since the period of industrial revolution in Britain, there has always been a significant amount of effort into developing complex techniques to help people with different tasks of production.

An industrial production process consists of series of machines, through which a combination of raw materials goes through and transform into the final product. Here, the term “machine” can be anything like a motor, drill, conveyor belt, etc. which come under electromechanical devices or chemical machines like ovens, dryers, chemical combustion systems etc.

What is Industrial Automation?

Industrial Automation is a process of operating machines and other industrial equipment with the help of digital logical programming and reducing human intervention in decision making and manual command process with the help of mechanized equipment.

The above definition is definitely not a simple one to understand but let us try to understand what an industrial automation is with the help of a small example.

Consider a manual industrial production process, where an operator is observing the temperature of an oven. Assume the task is to reach a certain temperature and maintain that temperature for about 30 minutes.

So, the operator has to first adjust the amount of fuel to the oven by controlling a valve to rise the temperature to the desired amount. Once the necessary temperature is achieved, it has to be maintained by constantly adjusting the valve i.e. either increase or decrease the fuel depending on the temperature for the next 30 minutes.

Now, with industrial automation, the whole process is taken care of without the help of an operator. First, there is a temperature sensor placed near the oven which reports the temperature to a computer.

Now, there is motorized valve, which is also controlled by the computer, for the fuel to be supplied to the oven. Based on the temperature readings from the sensor, the computer will open the valve to allow more fuel in the beginning. Once the desired temperature is achieved, the valve is shutoff.

But the computer can open or close the valve, even to allow a tiniest amount of fuel to flow, based on the temperature readings. The timer in the computer will indicate once 30 minutes is up and the computer can completely shut off the system. 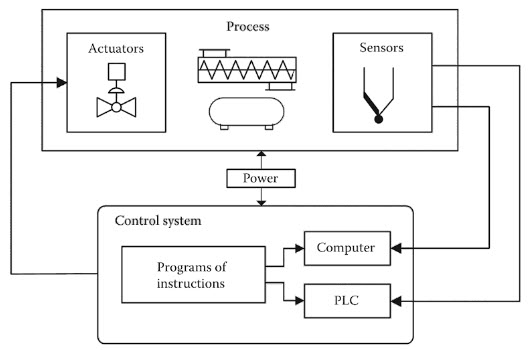 The term Automation is coined by an Engineer from Ford Motor Company, who were pioneers in industrial automation and manufacturing assembly line. In the beginning, the industrial production process is based on the eyes, hands and brain of a worker, in contrast to modern day sensors, actuators and computers.

But with technological developments in analog and digital control systems, microprocessors and PLCs (Programmable Logic Controllers) and various sensors, it has become very easy to synchronize several independent machines and processes and achieve true industrial automation.

There are a few secondary motivations for using automation in industrial production process like providing a safe environment for the operator, reducing the environmental pollution, etc.

Sitting at the top of hierarchy, the supervisor level usually consists of an Industrial PC, which is usually available as a desktop PC or a Panel PC or a Rack-mounted PC. These PCs run on standard operating systems with a special software, usually provided by the supplier for industrial process control.

The main purpose of the software is process visualization and parameterization. A special industrial ethernet is used for communication, which can be Gigabit LAN or any wireless topology (WLAN).

The Control Level is the mid-level in the hierarchy and this is the level where all the automation related programs are executed. For this purpose, generally, Programmable Logic Controllers or PLCs are used, which provide real-time computing capability.

PLCs are usually implemented using 16-bit or 32-bit microcontrollers and run on a proprietary operating system to meet the real-time requirements. PLCs are also capable of being interfaced with several I/O devices and can communicate through various communication protocols like CAN.

The terminal equipment like Sensors and Actuators are categorized into Field Level in the hierarchy. The sensors like temperature, optical, pressure etc. and actuators like motors, valves, switches etc. are interfaced to a PLC through a field bus and the communication between a Field Level device and its corresponding PLC is usually based on a point-to-point connection.

Both wired and wireless networks are used for communication and using this communication, the PLC can also diagnose and parameterize various components.

The power requirements of different systems in different levels of the hierarchy can be extremely different. For example, PLCs usually run on 24V DC, while heavy motors run on either 1-phase or 3-phase AC.

So, a wide range of proper input power supply is required for a trouble-free operation. Additionally, there should be security for the software being used to control the PLCs as it can be easily be modified or corrupted.

Considering all the above-mentioned levels and their corresponding components, a typical Industrial Automation System will have the following structure. 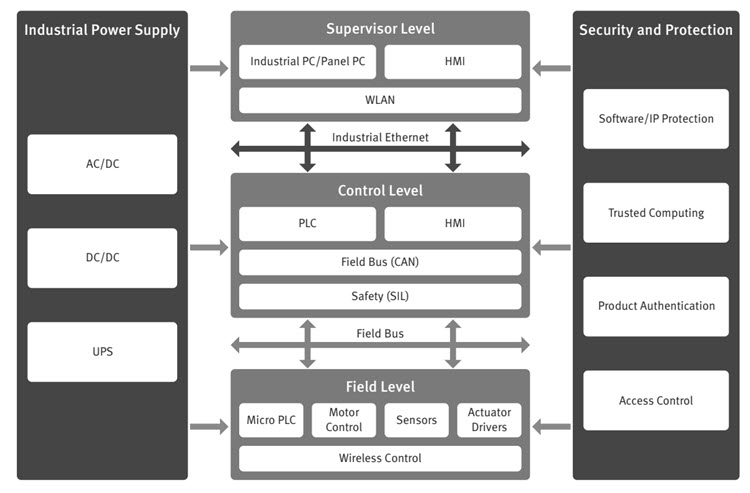 In Programmable Automation System, the sequence of operations as well as the configuration of the machinery can be changed using electronic controls. This system requires a significant amount of time and effort to reprogram the machines and usually used in batch process production.

A Flexible Automation System is usually, always controlled by computers and are often implemented where the product varies frequently. CNC machines are the bet example for this system. The code given by the operator to the computer is unique to a particular job and based on the code, the machine acquires the necessary tools and equipment for the production.

An Integrated Automation System is a set of independent machines, processes and data, all working synchronously under the command of a single control system to implement an automation system of a production process. CAD (Computer Aided Design), CAM (Computer Aided Manufacturing), computer-controlled tools and machines, robots, cranes and conveyors are all integrated using complex scheduling and production control.

Advantages and Disadvantages of Industrial Automation