Servo Motors are work horses of industrial automation. They are often used in industrial robotics, automation equipment, CNC machines, etc. The advantage of Servo Motors over other motors like Stepper Motors, for example, is its precision control of either linear or angular position (depending on the application).

The TowerPro SG90 is one of the most popular types of Servo Motors used in small embedded applications. Even I have used the same in several Arduino based applications.

But I have a slightly bigger TowerPro MG 996R Metal Gear Servo Motors, which I have been using in another robotic application. I will explain the specifications of this servo motor and you can follow this project as it is even with the smaller SG 90 Servo Motors.

The MG 996R Digital Servo Motor by TowerPro is a high torque servo motor with metal gears. It can provide an average stalling torque of 10kg compared to 1.8kg of SG90. 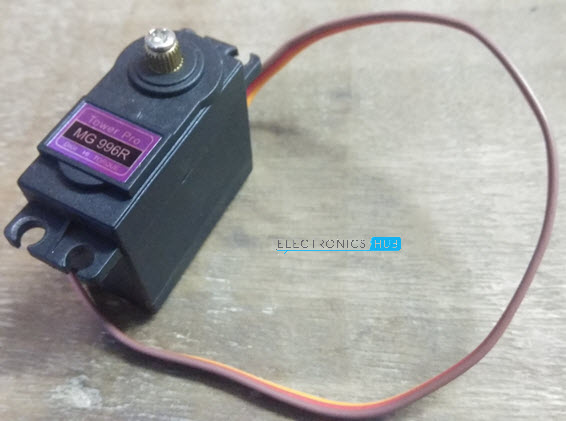 Following is a list of specifications of the MG996R Servo Motor.

Even though the MG 996R Servo Motor is bigger and powerful, the connections with respect to the MCU are similar to that of a SG90 Servo Motor. The Orange Wire must be connected to any PWM pin of the MCU.

For controlling the position, a potentiometer can be used and as per the readings from the ADC (whose input is the POT), the angle of rotation can be adjusted.

The following image shows the circuit diagram of interfacing a Servo Motor with STM32F103C8T6 Blue Pill board.

The code for Controlling a Servo Motor with STM32F103C8T6 Blue Pill is very simple and in fact, if you have any experience of interfacing Servo Motor with Arduino, then writing the code is very similar. But there is one thing you need to remember about the ADC.

If you have SG90 Servo Motor, whose maximum angle is 180 degrees, you have to divide the output of the ADC by 22.

The following is the simple code implementation for interfacing a Servo Motor with STM32F103C8T6 MCU.

The working of the project is very simple. First, the value of the potentiometer is read by the ADC of the STM32 Blue Pill MCU. The output of the ADC is then scaled to angle of rotation of the Servo Motor.

Using this value, the servo motor is driven to that particular angle. Alternatively, you can implement a full sweep functionality between the angles 0 degrees and 120 degrees (in case of MG 996R Servo).

A simple project for Controlling a Servo Motor with STM32F103C8T6 Blue Pill Board is implemented here. An advanced Servo Motor called the MG 996R by TowerPro is used in this project for demonstration.