Every electronic device we use in our daily life is one type of system. The systems working depending up on electronic variables like power or voltage or current is known as Electronic system. Number of blocks having different input – output relationship are connected together to form a system, which is supposed to execute a particular task or process.

Sometimes an electronic system is also referred as “Control system”. A system that is used to control or regulate the output of the other system is called control system. This is also a group or collection of different systems and blocks.

The industrial automations systems which are used in heavy industries are the example of control system. These are used to control the production process in industries.

The block diagram of a basic control system, with control loop is shown below.

If the produced system output is deviated from the desired output, indicates that the system is encountered with some noise or error. The error signal is connected back to the controller, to make changes in the system according to system requirements.

A system can be represented in many ways such as pictorial manner, descriptive manner, schematic and mathematical manner etc. But many of the electronic systems are schematically represented by inter – connecting the individual blocks in series.

Each and every block of the system has its individual inputs and outputs. Each block in a control system will represent a system or an individual component of a system.

The block diagram for the simple system is shown below, with individual inputs and outputs

This means the inputs and outputs of a system are in an direct relationship that inputs will show effect on outputs. This analysis of control system is called as “Cause and Effect analysis”.

An audio system, TV, or any Mp3 player is the example of an electronic system. The sound waves are converted to electrical signals and they are amplified to process the output of high strengthened audio signals, through speakers.

We come across so many systems in our day to day life, such as washing machine, drier, keypad, Air conditioner etc. we use control systems mostly in industrial purposes like space technology, weapons, power systems and quality controlling of products like industrial automation etc.

As we already explained earlier, every control system will have its own input and output. The input signal may be of continuous and discrete. Based on the input provided to the system, the control systems are classified into 2 types.

The magnitude of the continuous signal will vary with the time period T. As the input is Analogues in nature, the continuous electronic systems produce the analogous output. This is the reason they are notified as “Pure analog systems”. 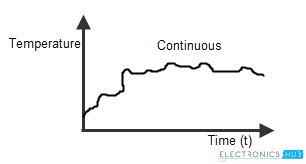 The values of the continuous electronic system varies only with time.

Other examples of the continuous electronic systems are current and voltage signals, pressure, velocity and temperature signal etc.

So these discrete systems are also known as “Digital systems”. Generally the output of digital system will be a binary number sequence, such as the collection of 0’s and 1’s. 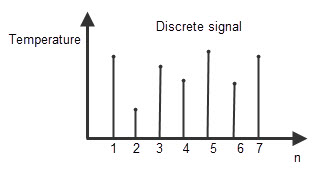 The temperature measuring (monitoring) system which measures the temperature of room only at particular intervals of times, such as particular days like on Monday, on Tuesday or in particular time intervals like 1pm, at 2pm, at 3pm etc is the example of discrete time electronic system.

Representing continuous system as a set of discrete intervals

The blocks of the electronic system can be connected with one another, to form more complex systems. This is called “Interconnection of blocks”. These interconnected blocks are about to perform the specific action or task. This interconnection is of two types

Let’s see the system below. Here a complex system is formed by connecting the two individual blocks, G1 and G2.

If the system has 3 blocks A, B, C connected in series, then the output of the series connected system is equal to Y = A*B*C. We can apply this for any number of blocks in series.

Example: a micro phone connected with amplifier and speaker.

Let’s see the system below. Here a complex system is formed by connecting the two individual blocks, G1 and G2. 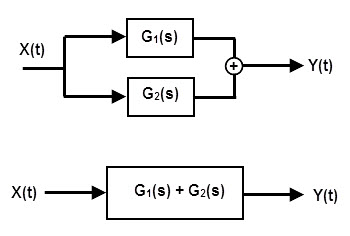 If the system has 3 blocks A, B, C connected in series, then the output of the series connected system is equal to Y = A + B + C. We can apply this for any number of blocks in parallel.

Example: several micro-phones connected with single amplifier and to a single speaker system.

Feedback is another type of interconnection of systems. Feedback loop means connecting some part of output value connecting back to the input. The electronic systems having a connected feedback loop are called “Closed feedback system”.

.
The feedback loop allows the system to check errors and avail it to auto correct the errors occurred in its output. So these systems are more stable than open loop systems (which doesn’t contain any feedback loop).

Example: An automatic heating system is an example of the simple feedback system.