Pulse Width Modulation or PWM is a technique of delivering power to loads like LEDs and Motors (PWM can also be used to encode messages). In this ESP8266 PWM Tutorial, I’ll teach you how to use ESP8266 WiFi Module to generate Pulse Width Modulation (PWM) signals that will be used for LED Fading.

We have seen several PWM tutorials using a variety of microcontrollers (or IC’s) like 8051, Arduino, Raspberry Pi and IC 555. Using the PWM technique, we have controlled the intensity of an LED (increased or decreased its brightness), changed the speed of a DC Motor (increase or decrease the speed) and also rotated a Servo Motor.

Now in this ESP8266 PWM Tutorial, I will control the brightness of an LED connected to the GPIO2 Pin of the ESP8266 WiFi Module i.e. LED Fading using ESP8266.

The ESP8266EX Microcontroller i.e. the SoC that is the heart of all the ESP8266 Modules (like ESP-01, NodeMCU, etc.) consists of four dedicated PWM output interfaces. The pins corresponding to PWM in ESP8266EX are as follows:

If you observe, all these four pins are not available in our ESP8266 ESP-01 WiFi Module. Then how can we implement PWM in ESP8266?

The answer for this is very simple: using Software Programming i.e. using Timers of the microcontroller, to be exact.

PWM in ESP8266 WiFi Module can be implemented with the help of Timer Interrupts. The frequency of the PWM signal can be anywhere between 1Hz to 1KHz (some say, the minimum frequency is 100Hz!).

The software implementation of the PWM generation in ESP8266 is very similar to that in Arduino. Since we are using the Arduino IDE to program the ESP8266, the function responsible for producing PWM Signal is analogWrite (the same function which we have used in Arduino as well).

analogWrite function takes in two parameters: Pin number and PWM Value. In place of Pin Number, enter the number of the Pin through which you want use the PWM Output. 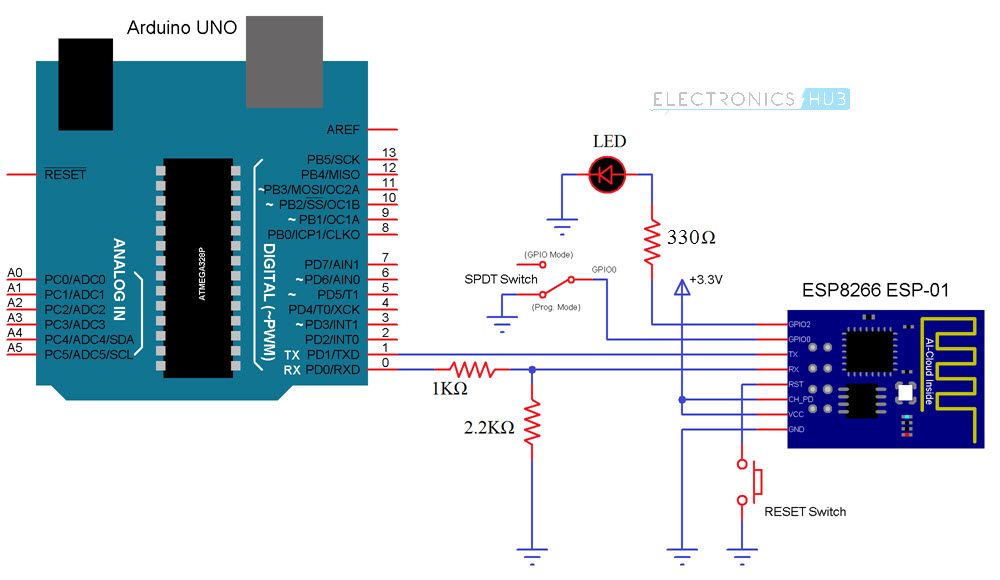 Connect an LED (I have used an 8mm LED, you can use a 5mm or 3mm LED with a current limiting resistor) to the GPIO2 pin of the ESP8266 WiFi Module.

Finally, the GPIO0 Pin. This pin responsible for enabling programming mode in the ESP8266. Connect the GPIO0 Pin to a SPDT slide switch i.e. to its centre terminal and connect one of the two terminals to GND. The other terminal is used as a GPIO Pin.

The code for ESP8266 PWM LED Fading Tutorial is given below.

After making all the connections properly as per the circuit diagram, enable Programming Mode in ESP8266 i.e. slide the GPIO0 switch to GND position and push the RST button.

After uploading the program, slide the GPIO0 pin to GPIO Position and push RST button once. Now, the code will start running and initially you can see the LED slowly increasing its brightness through 5 steps to maximum intensity.

After this, the fading action begins where the LED fades in and out i.e. low to high and high to low is a loop.