Static Electricity- Its Perspective and Development

Mr. Theophrastus in 321BC observed that the power of amber attracts straws, dry leaves after it has been rubbed with a woolen cloth. This was the first observation of electricity and was the first recorded experiment.

Later in 1600 BC, Dr.Gilbert discovered that this attraction could be excited in many other substances besides amber. He is considered as the founder of the Electrical science.

Mr.Otto Guericke invented the first electrical machine in the year 1674. He made it by utilizing a ball of sulphur fixing it on a spindle to turn it with a handle. A friction was created by pressing the ball with a finger or hand. This machine first produced the electric spark with sound. This turned the science to make wonders to originate a new science. In this experiment, it was also observed that the ball which was excited and charged for a short time attraction will be repelled by the same object.

Sir Isaac Newton in 1675 constructed the same experiment done by Mr.Otto Guericke with some changes. Sir Newton used a glass globe and this globe produced the sparks of ½ inch and could feel them with the finger placing on it.

Later Mr. Stephen Grey in 1720 further developed that the electricity may be conveyed from the machine to the body by a wire or wet thread at a considerable distance.

In the year 1733, Mr.M.Dufay further experimented and found that if the body is kept on a stand made up of glass rods could be excited if the glass rods kept dry. In this experiment, it was also conferred that there are two kinds of electricity one which was excited by that of glass and the other excited by resin, silks etc.

Later in 1736, the Newton’s experiment improved by Professor Winckler. He utilized the horse hair covered with silk cloth instead of using the fingers or hand to rub the glass ball. In 1738 Professor Boze discovered that keeping a tube of metal can collect this electricity. It was also found that the electricity will disappear if there are sharp edges or points on this metal conductor.

Dr.Grey made several trails with different kinds of matter and discovered that some bodies will have the power to conduct electricity and some of them will not.

With all the experiments, the discovery of an electrical machine has been done with the observations, improvements and innovative developments done by these scientists with individual or combined efforts. But the amount of power produced is in small quantity. There is an effort of several scientific investigators who are responsible for inventing the great Leyden’s jar. Over a period of time with many improvements and developments this led to a great product called ‘battery’.

Static electricity is the subject which deals with the study of electric charges at rest.

Recalling the above experiments done by or tried by the ancient eminent scientists, a spark or sparks have been produced with the help of glass, felt or with some other material. In all of these cases the movement of electron is responsible for this phenomenon. As per this elementary electro-static behavior, the entire process is the movement of electrons from one body to the other, thereby electrically charging of these bodies. One of the bodies will be charged positively (deficiency of electrons) and the other one negatively (excess of electrons).

Properties of the Electrical Bodies

Recalling the experiment of Mr. Dufay, two glass rods fixing on wooden stand as shown in the figure with a crossbar on them. 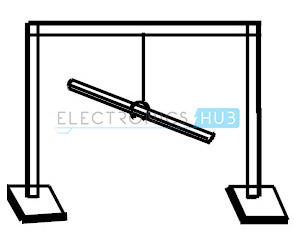 From the center of the crossbar a wire strip should be suspended by a silk thread, so that the wire strip will be able to move freely in a horizontal plane like a compass needle. A silk handkerchief is also needed to excite the glass rods. The experiment has to be in a warm dry room.

So, it can be concluded that similar electrifications will repel each other and unlike electrifications attracts. For this reason there exist two kinds of electricity:  (+) and (-) electricity, the electricity of the glass will be +ve electricity. By adding equal quantities of the glass electricity is zero. This resembles an algebraic sum of + and – which is equal to zero. The same experiment can be carried out by replacing the wire strip with a feather. The feather will be attracted to the rods.

This is the oldest instrument used to detect and determines the electrification. 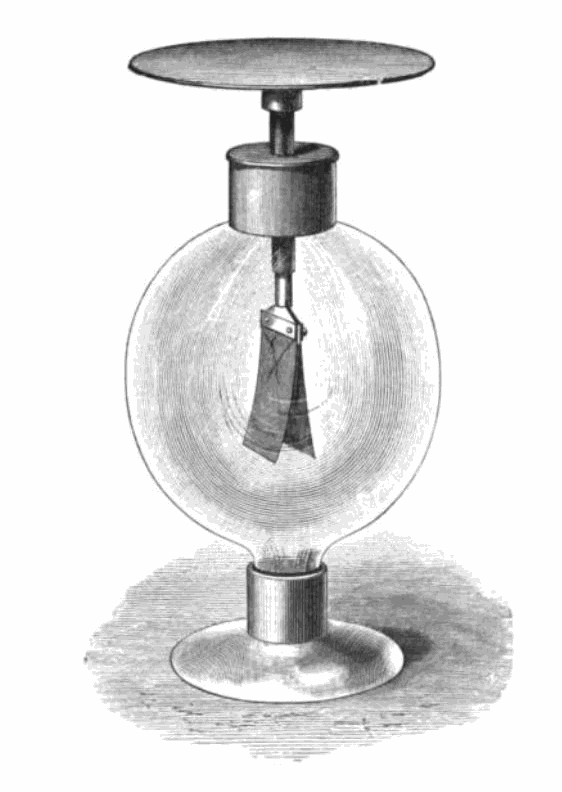 As shown in the figure, two gold leaves will be hanged (fixed one side) and attached to a metal rod which was fixed to a brass plate through a hole placed in a glass shade. When an electric body was placed on this plate, a portion of the electricity will pass through the gold leaves charging them to repel each other.  This is the measure of the charge. This is a very sensitive instrument used to detect small quantities of the electricity.

When a charged body is placed near another body without any physical contact between them, the second body will get electrified. The charge will exist on the other body till the charged body was present near to it, but as soon as the charged body is withdrawn the charge on the second body will disappear. This is called as electrification by induction. For example, if we rub the both hands together and place it on the above gold leaf electroscope, the gold leaves will be repelled, but as soon we remove our hands from the plate of the Gold leaf electroscope, the leaves will come to normal position.

A charged sphere was placed into a hollow cylinder which was on the plate of the electroscope. The gold leaves spread apart till the sphere is in touch position; the leaves retained the original position as soon as the ball is removed.

The force of attraction or repulsion between two electrified bodies varies inversely to the square of their distance apart where the body sizes are very small compared with their distance.

An electric field is a region of space in which electric charges activated by electric forces.

The basic unit of electric charge is the coulomb.

Like gravitation and magnetic fields the electric field strength is measured in terms of force on a unit positive charge.

The volt is defined as the potential difference between two points such that one joule of work is done if one coulomb of positive charge is moved from one point to the other.

The electric potential at a point is defined as the work done for moving or bringing a unit of positive charge from infinity to the point.

The electric current is the rate of flow of charge. The coulomb is the practical unit measurement of electric charge in MKS systems. One unit of charge carries 6.28 x1018 electrons. So, the rate of charge transfer of one coulomb per second is called ‘ampere’.

Where Q is charge and measured in coulombs,

t is time and it measured in seconds.

In the same way we can say the net charge of current Q = ∫ i dt which is the integration of current.

A charge of 4000 coulombs passes a point P in electric circuit for half an hour. What is the average current flow?

The observed current flow in the circuit is 100mA. How much charge is transferred in 5 minutes?

Typical values of copper are

the velocity of charges

It must be noted that an energy source is required to introduce the energy into the system. This energy source acts on the charge carriers, giving rise to current. Some of these sources are battery cells, generators, fuel cells and solar cells. That means a source will have the power to generate the electro-motive-force (emf). The emf is defined as the source of energy which can deliver the power to pass the charge through the source to form an electrical circuit. The unit of emf is volt.

Q = amount of charge in coulombs moving from a to b

W = energy level difference of the charge as it moves from a to b.

The energy will be measured in Joules. So, 1 joule of energy is required to move 1 coulomb of charge for getting 1 volt of voltage.

A resistance of one ohm in a particular wire or material is that if it develops 0.24 calories of heat when one ampere of current flows through it for 1 second.

In the year 1827, George Simon Ohm, a scientist observed that the electrical direct current (D.C.) flowing through a metallic conductor varies directly with the voltage applied to it. This is called the ohm’s law. According to the law

The unit of conductance is siemen and will be denoted as ‘℧’.

If 1 volt of the voltage is applied to a conductor and if 1 ampere current flows through it for a second, the material or wire is having a conductance of 1 mho.

Voltage and Current in a Practical Circuit 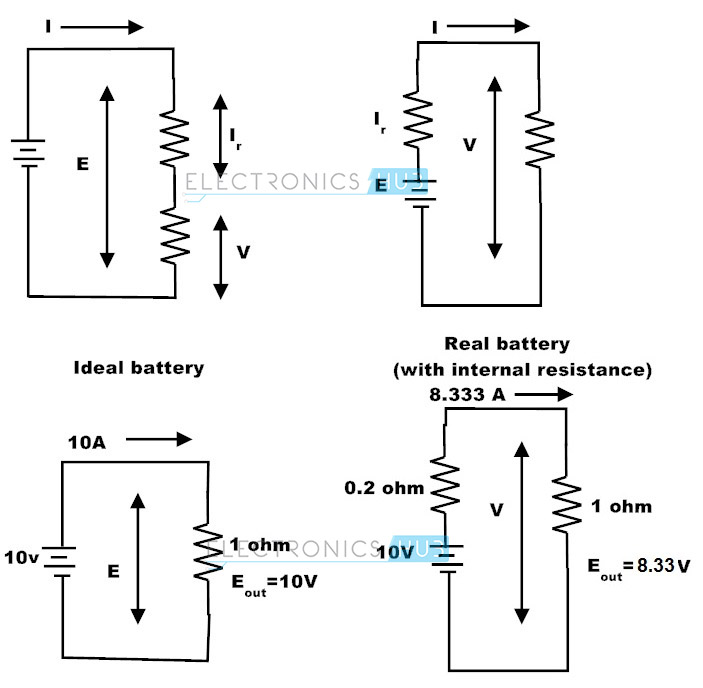 If the internal resistance of the battery is 1 ohm, Calculate

a) Voltage across the resistor R3,

b) current through R1,

c) lost volts as per the following circuit. 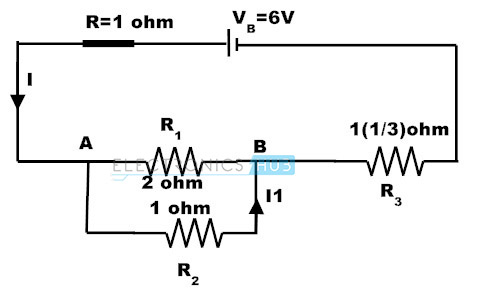 The resultant resistance of R1, R2 will be Ro