If you have made some sort of LED related project, then you probably might have used discrete LEDs (either through hole or SMD). These LEDs may be single color LEDs or RGB LEDs.

The main drawback of discrete LEDs is that if you use them in an array, you lose the privilege to control them individually. For example, if you connect three or four LEDs to a single pin of Arduino using a transistor, then all the LEDs in the array will have a same behavior i.e. brightness control or color change.

If your aim is to control individual LEDs in a strip, then WS2812B Addressable RGB LEDs are the answer for you.

The WS2812B Addressable LED Strip is an intelligent light source that contains a control IC and an RGB LED in a same package, usually in SMD 5050 form factor. The following image shows a strip of WS2812B LEDs. 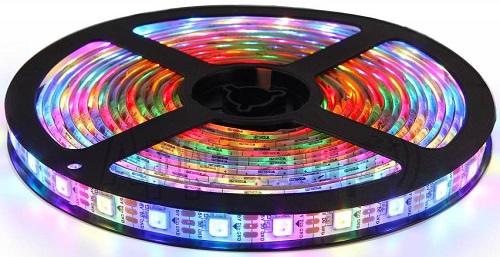 At first glance, it looks like a regular LED strip. But upon a closer inspection, you can find the WS2812B LED Control IC integrated into the SMD 5050 RGB LED Package. The following blown up image shows the same. 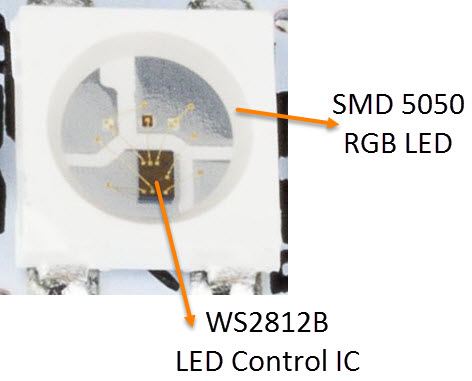 Individual WS2812B LED Block has four pins namely VDD, VSS (GND), DIN and DOUT. The functions of these pins are very simple and the following table gives a simple function description of the pins.

The power supply for the WS2812B IC is also supplied through the VDD Pin.

To understand how the WS2812B LEDs can be individually controlled, the following application circuit will be useful. All the WS2812B LEDs are connected in a cascade manner where the DO of the first LED is connected to the DIN of the second LED and so on.

But the first LED has to receive data through its DIN pin from a Microcontroller like Arduino. The following image shows the typical application circuit block diagram. 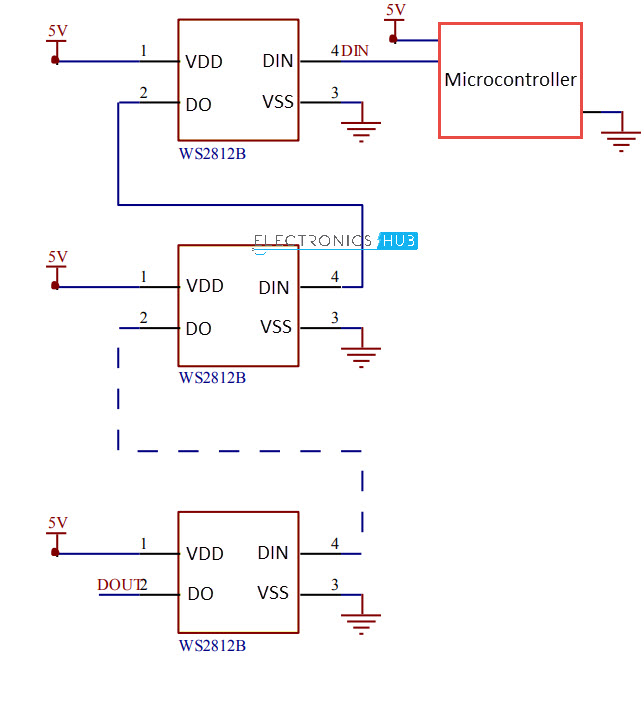 The data transfer protocol used by the WS2812B LEDs is NRZ Mode. The first DIN Port of the WS2812B LED array receives data from the microcontroller. The data for individual pixel is of 24-bit that consists of individual Red, Green and Blue LED control data of 8-bits each. The order of data must be GRB and the composition of the 24-bit data is shown below. Note that HIGH bit data is sent first.

Once the first WS2812B Block receives the first 24-bit data, the data is sent to its internal latch for further decoding. The remaining data is reshaped by its signal reshaping and amplification circuit and is passed to the next pixel in the cascade through the DO pin.

Now, let us proceed to control the WS2812B LED Array using Arduino. Before going further into designing the schematic, there is one important thing we need to address i.e. the power supply to the project.

So, the best way to power up the project i.e. both Arduino and the WS2812B LED Strip is with the help of an external 5v supply that can provide enough current.

The DIN pin of the LED Strip is connected to Digital IO pin 7 of the Arduino through a 330Ω Resistor. 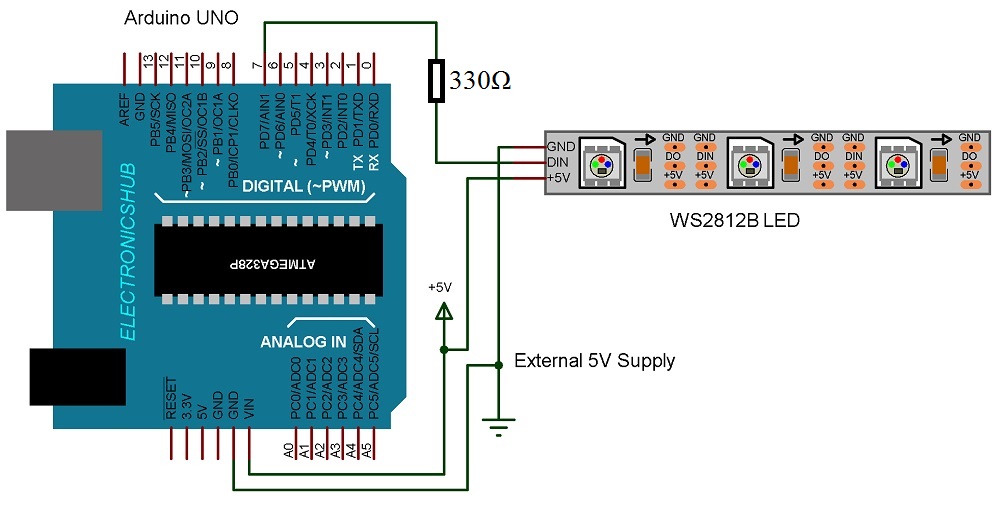 The first step for programming Arduino is to download a supporting library called “FastLED”. You can download the library from the following link: “FastLED Library”.

Extract the contents of the zip file and rename the folder as “FastLED”. Move this folder to the libraries folder of the Arduino.

A simple introduction to WS2812B Individually Addressable LEDs is given in this tutorial along a project to show how we can control WS2812B LEDs with Arduino. If you understand these basics, then you can implement a wide range of projects.