In this tutorial, we will learn about Touch Sensors. Today, almost all user interface is based on touch. The range of applications is count-less and some important ones are Mobile Phones, Tablets, Laptop computers, Cars, Elevators, ATMs, Cameras, etc. Touch Sensors are the important components in modern Touch Screen Applications.

The sense of touch is an important sensory channel in many animals and some plants. Our senses inform to us when our hands touch something. Computer input devices are indifferent to human contact as there is no reaction from software in the event of making, maintaining or breaking physical contact like touches or releases.

A touch sensor detects touch or near proximity without relying on physical contact. Touch sensors are making their way into many applications like mobile phones, remote controls, control panels, etc. Present day touch sensors can replace mechanical buttons and switches.

Touch sensors with simple rotational sliders, touch pads and rotary wheels offer significant advantages for more intuitive user interfaces. Touch sensors are more convenient and more reliable to use without moving parts. The use of touch sensors provides great freedom to the system designer and help in reducing the overall cost of the system. The overall look of the system can be more appealing and contemporary.

Touch sensors are also called as tactile sensors and are sensitive to touch, force or pressure. They are one of the simplest and useful sensors. The working of a touch sensor is similar to that of a simple switch.

When there is contact with the surface of the touch sensor, the circuit is closed inside the sensor and there is a flow of current. When the contact is released, the circuit is opened and no current flows.

The pictorial representation of working of a touch sensor is shown below.

Touch sensors, unlike mechanical devices, do not contain moving parts. Hence, they are more durable than mechanical input devices. Touch sensors are robust as there are no openings for humidity and dust to enter.

The principle of a capacitive touch sensor is explained below.

The simplest form of capacitor can be made with two conductors separated by an insulator. Metal plates can be considered as conductors. The formula of capacitance is shown below.

ε0 is the permittivity of free space

A is area of the plates and d is the distance between them.

In capacitive touch sensors, the electrode represents one of the plates of the capacitor. The second plate is represented by two objects: one is the environment of the sensor electrode which forms parasitic capacitor C0 and the other is a conductive object like human finger which forms touch capacitor CT.

The working of a capacitive touch sensor is shown in below figure. 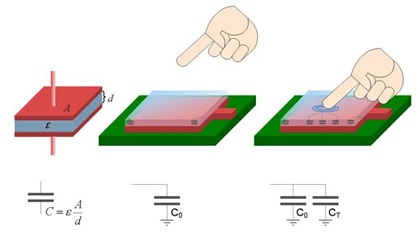 The measurement of capacitance is used in many applications like determining distance, pressure, acceleration, etc. Capacitive Touch sensors are another area of application. There are numerous methods to measure capacitance. Some of them are: amplitude modulation, frequency modulation, time delay measurement, duty cycle, etc.

To distinguish between intended and false touches, additional sensing pads or software algorithms are used. The best solution is to get rid of reference ground electrode.

When an external conductor like a human finger comes in contact with the surface, a capacitance is formed between them and draws more current from the corners. The current at each corner is measured and their ratio will determine the position of the touch on the surface.

In projected capacitive sensing, the whole surface is not charged, but an X – Y grid of conductive material is placed between two insulating materials. The grid is often made of Copper or Gold on a PCB or Indium Tin Oxide on glass. An IC is used to charge and monitor the grid.

When a charge is pulled by external conducting object like a finger(s) from an area on the grid, the IC calculates the location of the finger on the touch surface. Touch sensors, made of projective capacitive technology can be used to sense a finger that is not touching its surface. They act as near proximity sensors.

A resistive touch sensor consists of two conductive layers separated by small spacer dots. The bottom layer is made up of either glass or film and the top layer is made up of film. The conductive material is coated with metallic film generally Indium Tin Oxide and is transparent in nature. A voltage is applied across the surface of the conductor.

When any probe like a finger, stylus pen, pen, etc. is used to apply pressure on the top film of the sensor, it activates the sensor. When ample pressure is applied, the top film flexes inward and makes contact with the bottom film. This results in voltage drop and the point of contact creates a voltage divider network in the X – Y directions.

This voltage and the changes in the voltage are detected by a controller and calculate the position of the touch where the pressure is applied based on the X – Y coordinates of the touch.

The functioning of a resistive touch sensor can be explained using the following figure. 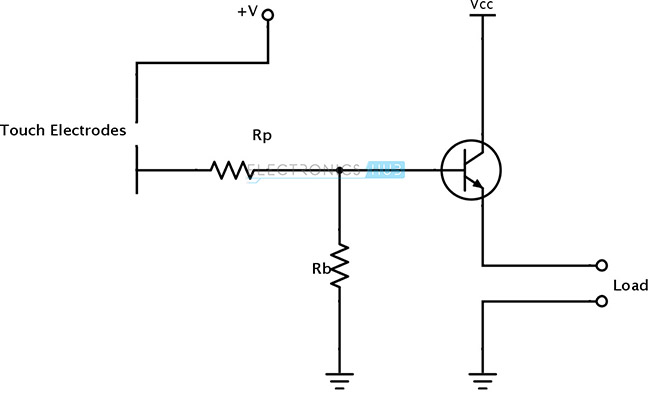 The resistance of the object touching the electrodes will come into the picture in the working of resistive touch sensors. For example, when finger touches the surface, the small resistance of the finger allows some current to flow through it, completing a circuit. The transistor acts as a switch. The resistor Rp is used to protect the transistor from any possible short circuit of the electrodes. The resistor Rb is used to keep the base at the ground when the circuit is open, i.e. there is no finger.

When both the electrodes are touched, small current flows through the finger and the transistor switches ON, as a result the load becomes active.

A simple resistive touch sensitive circuit is shown below. 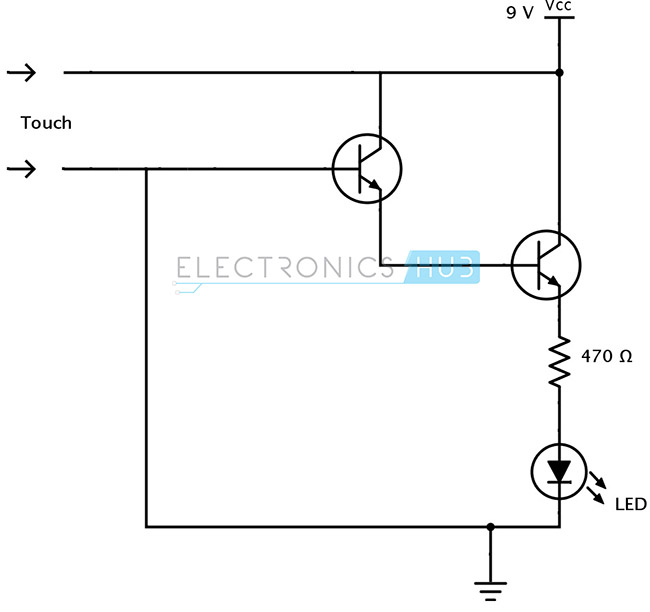 It consists of two electrodes, two transistors connected in Darlington configuration, a resistor and an LED. When a finger is placed on the electrodes, the circuit is complete and current amplification takes place. The resistor is used to restrict the amount of the current to the LED.